In recent days several activists in the J14 movement across the country have been summoned to interrogations in various police stations with the stated goal of learning what their plans are for the coming summer. I was one of them. Today I showed up at the central district station in Tel Aviv only to find out that media pressure led to the cancelation of interrogations.

It all started with a small piece of paper I found in my mail box on Sunday at around noon. Signed by one “Shabi”, this police notice ordered me to report to the Yiftakh command of the Tel Aviv Police for interrogation on Wednesday morning. More than that it did not say.

At first I thought this was finally my chance to meet up with the notorious secret service, the Shin Bet, whose members have been gathering information on anti-occupation activists and interrogating them for years, usually contacting them by such summons to a police station. I’ve always wondered why they never bothered to give me a call. Anyway – this was not the case this time. After publishing a picture of the notice on Facebook I soon learned that similar notices have been given to at least five activists in different parts of the wide network that forms the J14 movement for social justice. Why they chose me was unclear to me, since other than attending demonstrations, getting arrested in one and writing about some of them I was never too involved in the movement – but there it was. One of the activists got a phone call from a policeman, who told him the point of interrogations would be to learn what the movement’s plans are for the coming summer and “better coordinate” coming demonstrations. 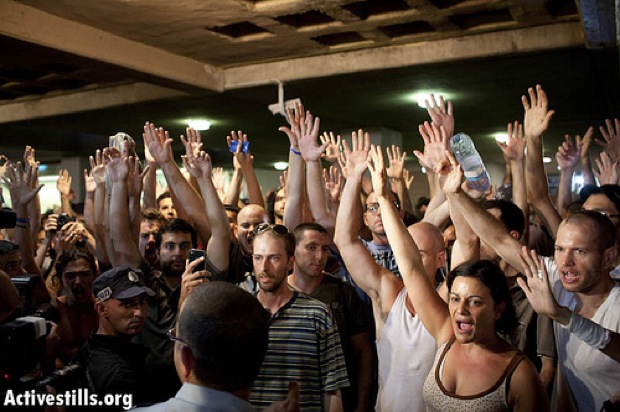 Once the scope of the police action and its aim were made clear, the story hit the news. Legal commentaries and a statement by ACRI explained that police is using illegal steps that might have a “cooling down effect” on the movement – the likes of which have been banned by courts time and time again in the name of freedom of speech and freedom of assembly. (Read ACRI’s letter to the police commissioner here.) A Ha’aretz editorialthis morning sent a clear message against “police intimidation” of activists, demanding that Public Security Minister, Yitzhak Aharonovitch, order the police to step down and cancel interrogations. Later this morning the minister announced that he does not approve of such police tactics, and asked the chief of police to retract the notices. Within hours, most of the activists received phone calls informing them they did not have to report for interrogations.

That is, all but two, the first being a activist in Jerusalem who was interrogated and had her house searched, as police feared she was organizing an illegal march in which torches would be carried. ACRI attorney Lila Margalit protested against this search, which was made with neither a warrant nor the informing of the activist of her rights in a search. “It seems the police is yet to fathom what is wrong with its actions,” says Margalit. “In a democracy the police does not interrogate activists about planned demonstrations and it most certainly does not ask to search their homes for demonstration equipment.”

I was the second one. I showed up on time at the police station in the morning before the recall order was issued, having already planned to stick to my right to remain silent. I was marched into a tiny room with two policemen from the district intelligence unit, who surprised me completely with what was perhaps one of the shortest interrogations in history.

“Please sit down. Want something do drink?” asked one. “No thanks,” I replied. “What do you do in life, Haggai?” fired the second. I decided that it would do no harm to answer this question, and immediately afterwards inform them that I did not come here to talk and that I refuse to go any further. “I’m a journalist,” I said, and without being able to complete the sentence I was immediately answered: “Well, we invited you here to coordinate our expectations ahead of the protests of the coming summer regarding social justice and all that, but as you’re a journalist we cannot be in contact with you, so we’re done.”

And that was it. As I had not heard of the minister’s decision, I was totally stunned, and stayed there for another minute in which the two explained that the police is very supportive of demonstrations and that coordination is best for all sides and that the whole story of my invite being published on Facebook and the media fuss around it was blown out of proportion. But they didn’t ask me a single question, and I was out of that tiny room less than three minutes after I had entered it. This was a bizarre ending to a troubling story, a story of intimidation of activists – not uncommon in our parts, but slowly spreading and affecting growing parts of the population. While J14 demonstrations last year enjoyed almost complete police immunity, and people blocked streets all over the country without being arrested – now things are different. Since municipalities and police started taking down the encampments that symbolized the movement in September, the attitude of the police changed. More and more demonstrators are arrested, and complain about police brutality. Police officers told several activists that they would not allow another summer of protest, homeless squatters are evicted on a regular basis and arrested – and now this.

The government probably knows that the joyfulness of struggle that was felt in the streets last summer has a chance of turning into bitterness and rage this summer – as the welfare of citizens did not change and their demands were left unheard – and is thus less willing to facilitate  the movement’s continuation. It remains to be seen how the movement responds.