When new media activist Daniel Sieradski, a.k.a. the Orthodox Anarchist, a.k.a. @mobius1ski , suggested having an ad hoc Kol Nidre minyan on Wall Street, in solidarity with the Occupied Wall Street movement, he wondered if he would succeed in attracting 20 participants (an egalitarian minyan of 10 men and 10 women).

To his amazement, over 1,000 Jews of all ages and backgrounds, from secular to observant, showed up for an exhilarating experience which, judging from the tweets (hashtag: #OccupyYomKippur), had many people feeling as though they were practically levitating. Several friends told me it was an incredibly moving experience. 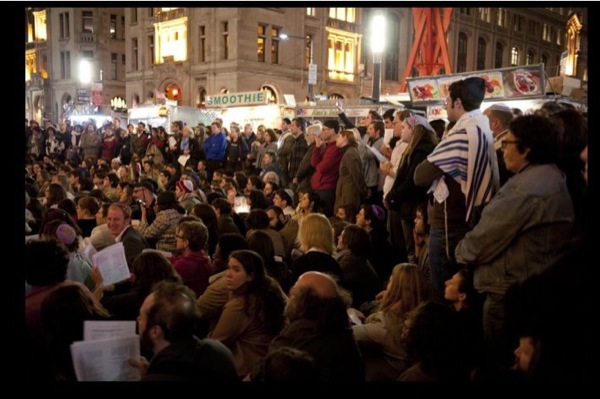 Kol Nidre on Wall Street (photo: Damon Dahlen / AOL)
@Mefranny: Mom, I think I just had the most meaningful Jewish experience of my life. Wish you were with me.

@maxblumenthal Hundreds of Jews declare in unison at #occupaywallstreet “We will hold ourselves accountable for the occupation of Palestine. Aleinu!”

@aimeeweiss also tweeted a photo of the supplemental ‘al kheit,’ the traditional confession of sins for which we try to atone by praying and fasting on Yom Kippur. The sins listed on the #occupyyomkippur ‘al kheit’ include, ‘being cynical about repairing the world,’ ‘not defending Israel’ and ‘not defending Palestine.’ 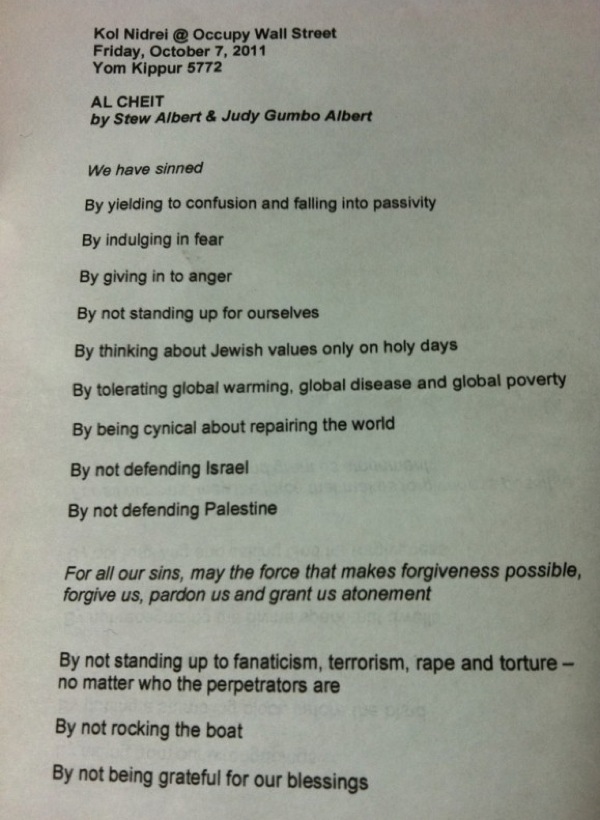 @aimeeweiss also uploaded a short video clip of the singing at the Kol Nidre service. Even in these few seconds, one can sense the spiritual and communal warmth of this gathering.

UPDATE: Another video, posted on YouTube, shows spontaneous dancing on the street after the Kol Nidre service ended:

UPDATE 2: George ‘Getzel’ Davis posted the sermon he read at #OccupyYomKippur on his Facebook page. Here is the text:

Friends – we are here tonight to celebrate the holiest day of the year, Yom Kippur. Yom Kippur has been misunderstood to be a sad day.  But really, an early rabbinic texts calls Yom Kippur one of the two happiest days of the year. What makes this day happy?  It is the day of forgiveness.   This is what Yom Kippor means “The Day of Forgiveness.”

Forgiveness is important because once we can mourn our mistakes then we are no longer ruled by them.  We are free to create things anew.

This is what Kol Nidreh is about.  It is releasing ourselves from the oaths that we mistakenly took.

When people think about oaths, they usually think of verbal promises.   In Judaism though, most of our oaths are “Chazakas” – or oaths taken through repeated action.   By doing things again and again, we make internal promises about how we want to live.   Other names for these might be habits, preferences, or addictions. These chazakas  rule our lives, making things simpler by allowing us to live on autopilot .

Yom Kippur is the happiest day of the year because it gives us the radical option of being here now.   We don’t work.  We don’t eat.  We don’t drink.  We don’t have sex.  We dress in white robes.

We do these things because Yom Kippur is a ritual death.   It is the way that we allow our old selves to die.

You know friends, it is hard not to worship gold, or power, or any of the other idols that our society shoves down our throats.  I believe that this is why the Torah tells us that there is something else created in the image of G!d.

In the first chapter of Genesis the first human was created in the image of G!d  If we need something to serve here on earth, we are given humanity.   Service to humankind is sacred and a reflection of service of G!d.

Could this be a renaissance of  a new movement, composed of Jews who are proudly identified with their community and progressive on all issues – including Palestine, the once-great taboo?

Read more about #occupyyomkippur on

The Huffington Post (including a set of beautiful photographs)