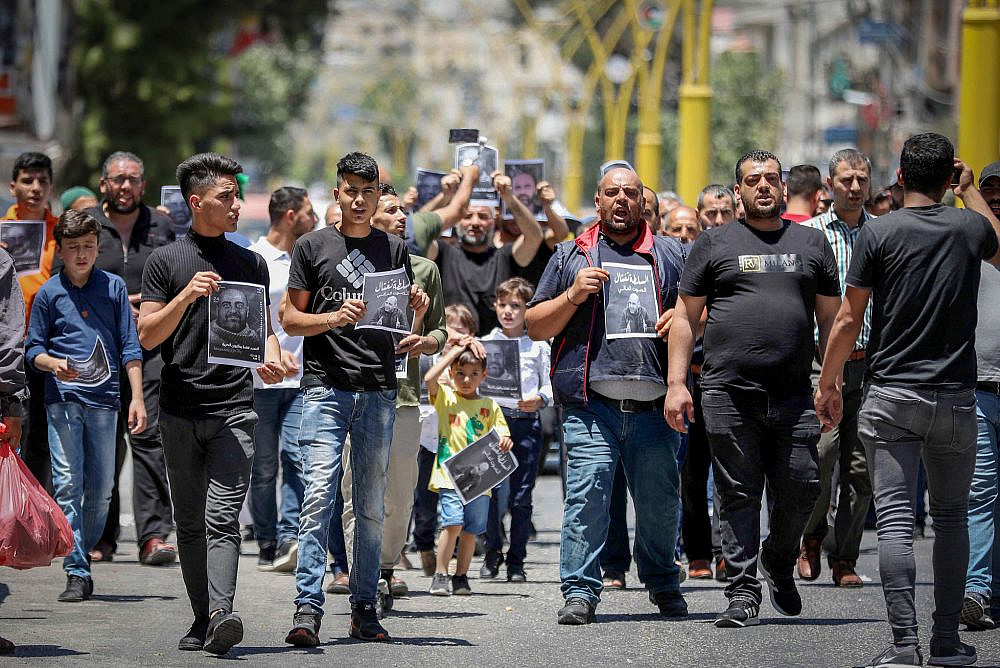 Palestinians take part in a protest over the killing of activist Nizar Banat, in the West Bank city of Hebron, July 2, 2021. (Wisam Hashlamoun/Flash90)

Palestinian radio reporter Akil Awawdeh was covering a protest in Ramallah on the evening of July 5 when Palestinian security officers began dispersing the gathering with excessive force. The officers attacked and severely wounded Awawdeh, who was then arrested and detained. He was beaten again in custody and denied medical treatment for almost two hours, he said.

Dima Amin, an activist and medical doctor who was also detained that same night, witnessed Awawdeh’s beating. She said she warned the officers that he was losing consciousness. “I looked at Akil, who was in very bad shape, and told them to stop and allow me to help him,” she said. “I felt like he was dying at their hands.”

The police officers ignored her calls and kept hitting Awawdeh until he was no longer able to move, Amin recalled. “They were kicking and beating without thinking,” she said. “I urged them to transfer him to a hospital immediately,” she continued, but the ambulance arrived only 30 minutes later.

At the hospital, Awawdeh said he was approached by an undercover police officer who asked him not to report what had happened to him. In return, the undercover agent told Awawdeh, police will not charge him for attacking a female police officer.

“But I did not know what female officer he was talking about,” Awawdeh said in a phone interview, still short of breath from his wounds, days after he was attacked. “That is when I figured out that they were cooking something up to silence me.”

Since the June 24 killing of government critic Nizar Banat under the Palestinian Authority’s custody, thousands of Palestinians have taken to the streets in protest, in some cases demanding that President Mahmoud Abbas resign. In response, the PA has launched a brutal campaign of repression. Security officers have targeted activists, journalists, and lawyers, detaining at least 15 people in a single day. Despite the ongoing backlash to Banat’s killing, human rights advocates say Palestinian security forces are still assaulting detainees, in some cases amounting to torture.

‘I still hear their pleas’

On July 5, family members and supporters organized a sit-in outside the Ballou’ police station in Ramallah to protest the arrest of six Palestinians who had planned a peaceful demonstration in the city earlier that day. According to an Amnesty International report of the protest, Palestinian police first tried to disperse the gathering by persuading protesters to leave. When they refused, the officers gave them a 10-minute warning. Shortly after, riot police began attacking the protesters. 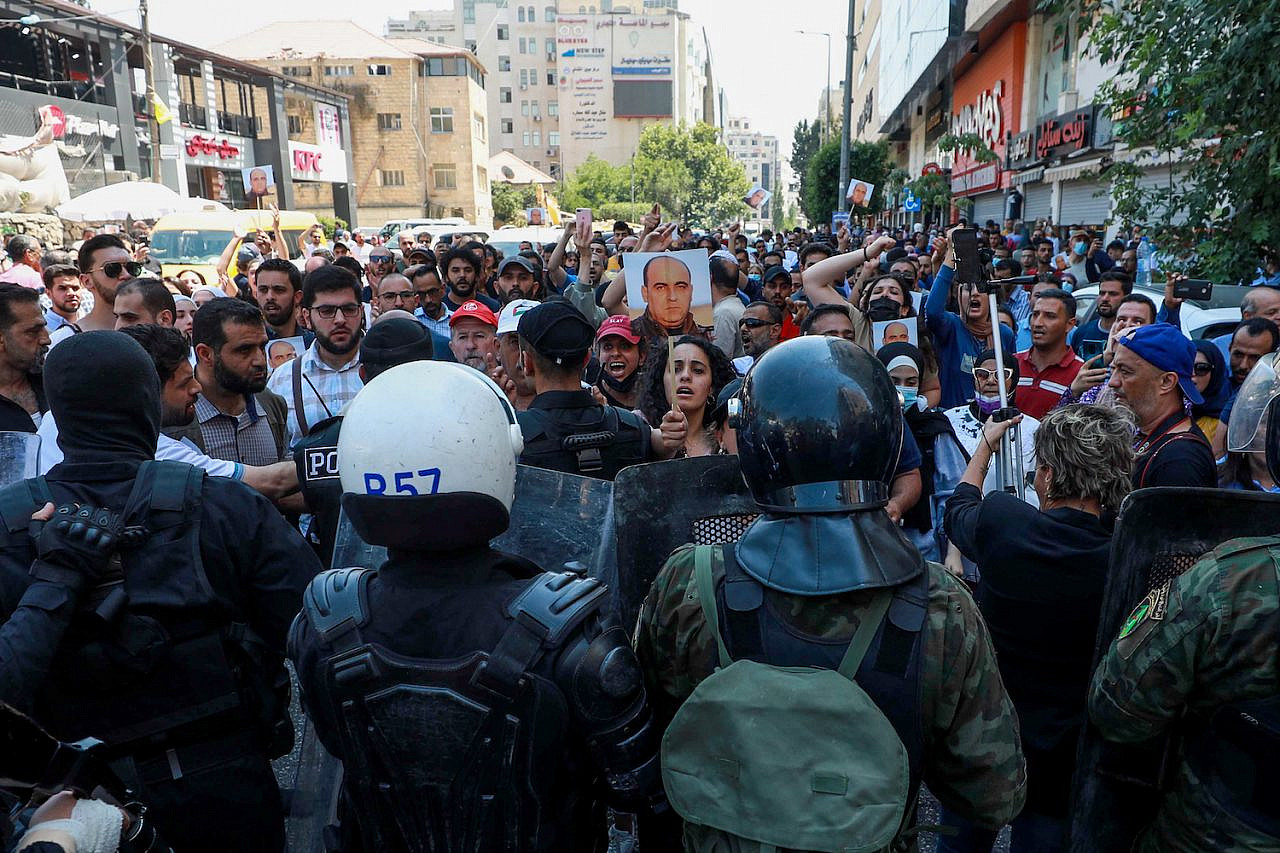 “As soon as my team and I arrived at the protest, around 9 p.m., we introduced ourselves to the security forces and showed our press cards. Then, we started livestreaming the event,” recounted Awawdeh. But minutes later, Awawdeh said he was approached by an officer who informed them that the location was a “security zone,” and therefore they were not allowed to film.

“We complied with their orders and stopped the social media livestream,” said Awawdeh. When riot police arrived, he said he sensed things were about to escalate, and ordered his crew to evacuate the scene immediately. But before he could leave, police officers attacked him.

“As soon as the riot police arrived, the events violently deteriorated and protesters were attacked with absolute cruelty,” Awawdeh recalled. “The first blow I received was by a riot police officer who hit me hard with his baton against my chest. Then, another policeman hit me again in the same spot using his glass shield.”

In more than a decade of reporting from the West Bank, Awawdeh had never witnessed this kind of brutal repression before, he said. He saw police officers throwing children to the ground, firing gas grenades at the elderly, and dragging protesters into police cars to detain them.

The PA has a history of arbitrary arrests, mistreatment, and torture over the years, said Omar Shakir, the Israel and Palestine director at Human Rights Watch. The organization is still researching the most recent government attacks on Palestinians, but in 2018, HRW published a report documenting the PA’s pattern of suppressing government critics and opposition. 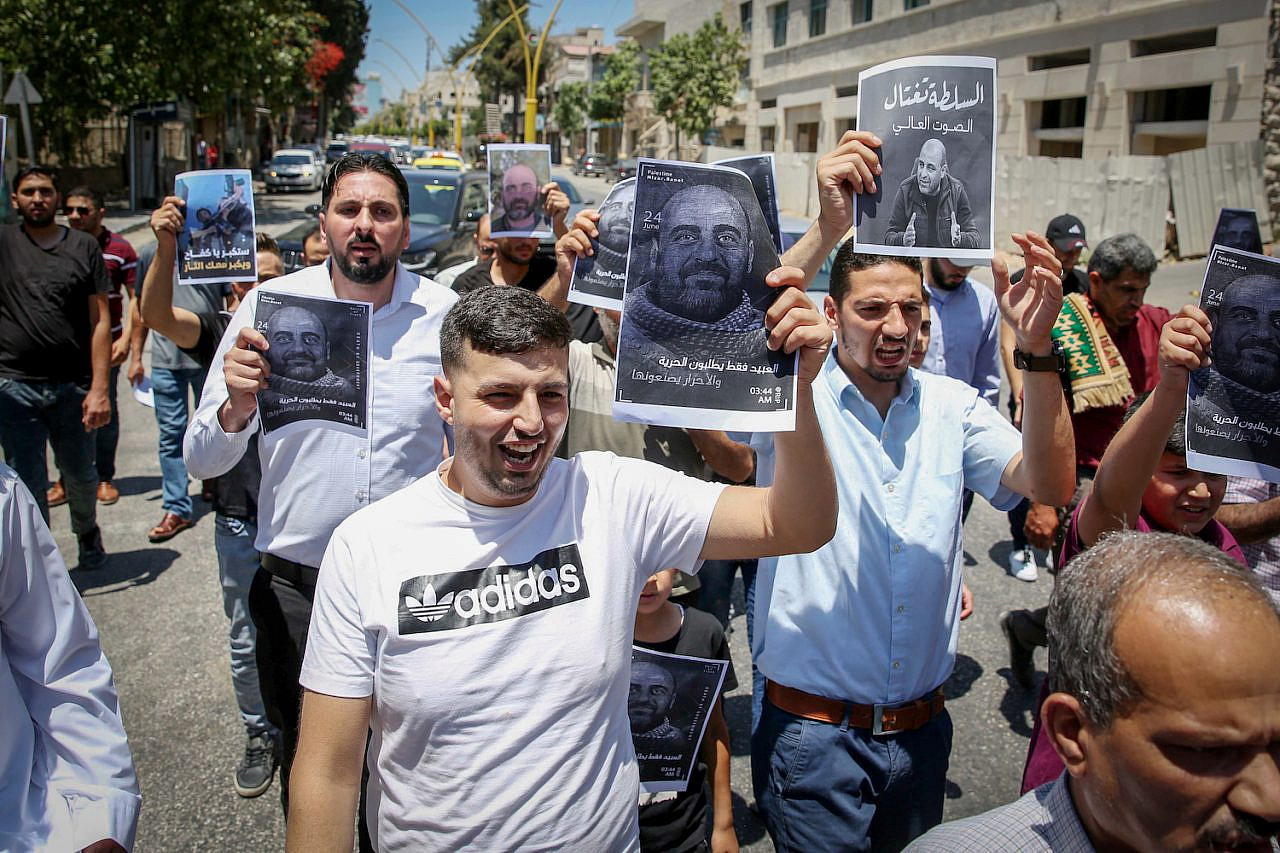 Palestinians protest the death of PA critic Nizar Banat, in the West Bank city of Hebron, on July 2, 2021. (Wisam Hashlamoun/Flash90)

Saleh Hijazi, Amnesty International’s deputy regional director for the Middle East and North Africa, stressed that there have been previous cases of death in custody with strong evidence of torture, citing Haitham Amer as an example. Amer, a 33-year-old nurse who the PA suspected of Hamas membership, died in 2009 while detained by Palestinian security forces in Hebron. The authorities had not charged him with any offense or given a reason for his arrest. A 2010 military court trial acquitted the officers accused of killing Amer, claiming “lack of evidence,” even though an official Palestinian autopsy report stated torture as the cause.

In 2018, Palestinian undercover agents attacked Hijazi’s colleague, Laith Abu Zeyad, who was documenting a protest against sanctions that the PA had imposed on the blockaded Gaza Strip. Officers snatched Abu Zeyad’s phone and detained him along with at least 18 other people, some of whom were tortured by Palestinian police while in custody, said Hijazi.

According to Talal Dweikat, the spokesperson for the Palestinian security forces, the HRW torture report and similar accounts by other organizations are neither accurate nor fair. “The reports contain injustice and misrepresentation,” he said in a phone interview.

Dweikat admitted that the PA is responsible for Banat’s death, given that an official investigation showed that he died in their custody. “Those who were responsible for the killing of Banat were military officers, therefore Prime Minister [Mohammad] Shtayyeh referred them to the military court and they will be publicly prosecuted,” he said.

Dweikat added that Palestinians have the right to protest, but “protesters heavily insulted the security forces and demanded that the president leave.” He continued, “The protesters were mad over the killing of Banat, which we did not accept as well, and followed the law in regard to the incident. Now, what is the reason behind the calls for President Abbas to leave, and for the dissolution of the PA?”

When asked about the suppression of protests and the violence documented at the Ballou’ police station, Dweikat urged those who were attacked to file a complaint with the military court. “We will never be able to fix these behaviors, unless citizens speak up and do something about them,” he said.

But according to Amnesty’s Hijazi, victims and human rights defenders have lost faith in the Palestinian justice system. “Parallel to the pattern of human rights violations by the security forces, we have also seen near total lack of accountability, and it is this impunity that fuels and allows the repression and torture to continue,” he said.

“To restore this faith and to break the cycle of impunity, President Mahmoud Abbas, the one who holds the authority and power, must order an independent, impartial, transparent, and effective investigation into the events, starting with the death in custody of political activist Nizar Banat, and to cover the brutal campaign of repression launched by the security forces which followed. The investigation must bring perpetrators to justice and ensure redress to victims,” said Hijazi.

Ubai Aboudi, head of Bisan Center for Research and Development in Ramallah, was one of the organizers of the July 5 protest. He said that as soon as he arrived at Al-Manara Square, where protesters were gathering, he was arrested.

“We, as a group of Palestinians, were there to demand our rights of freedom of expression, and most importantly to hold elections,” said the 37-years-old father of three. “We arrived around 7 p.m., and immediately we were arrested in two groups, which tells me that we were targeted by the security forces prior to our arrival.” 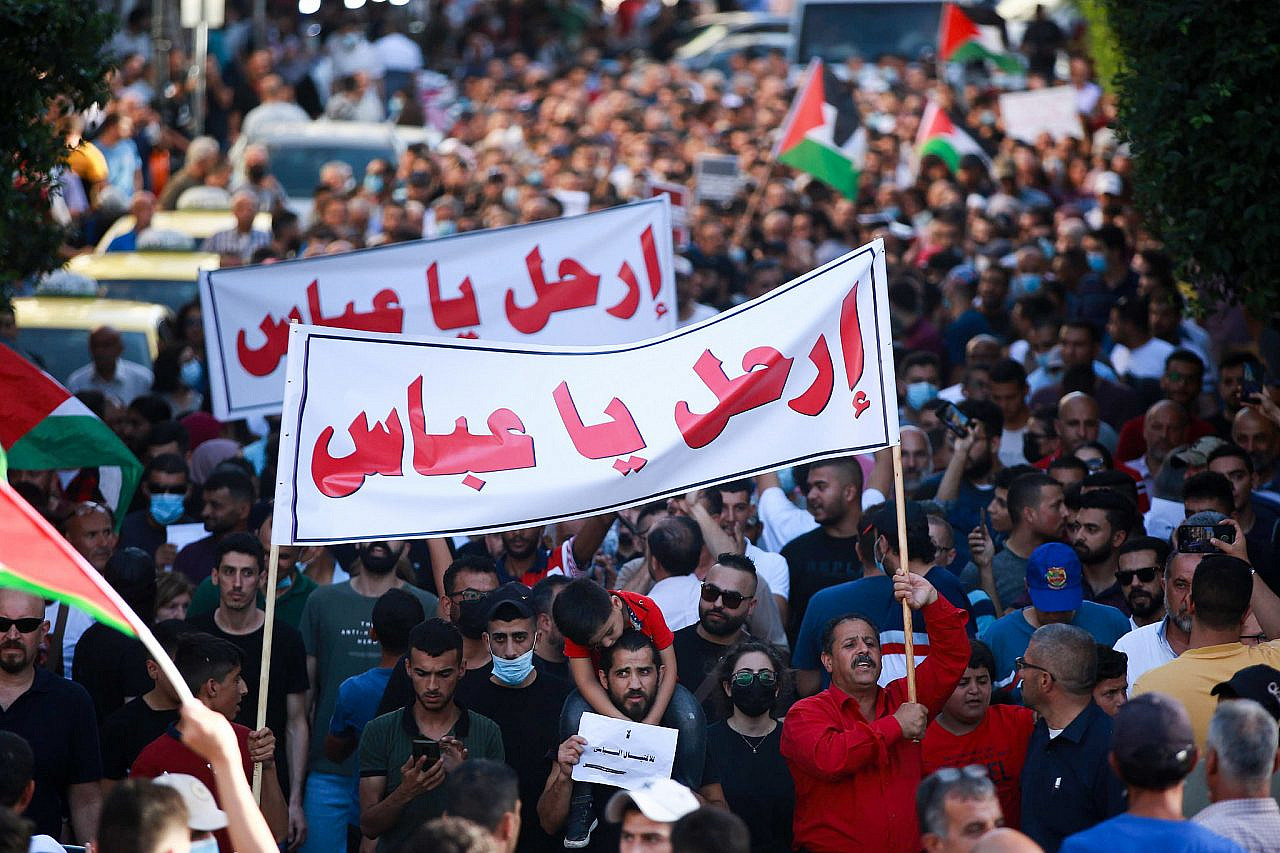 Palestinians clash with PA security forces during a protest over the killing of activist Nizar Banat, in the West Bank city of Ramallah, July 3, 2021. (Flash90)

At the Ballou’ police station, Aboudi recalls being approached by a police officer who apologized for the arrest, and told him that it was a decision made at the political level.

When Aboudi’s wife, Hind Shraydeh, learned of his arrest, she decided to go to the police station to check on him, along with her children, father-in-law, and brother-in-law. She also posted on Facebook about his detention. “I was scared to death because just days ago, the Palestinian security forces had killed Nizar Banat,” she said.

When Shraydeh arrived, she saw that other families were also gathered outside the police station, as well as activists, journalists, and lawyers. First, an undercover agent approached Shraydeh and asked her to leave, but she refused. Then, police officers claimed the families were blocking the street. “None of us were on the street, we were on the sidewalk,” she added.

Minutes later, riot police attacked the people who had gathered outside the station. Shraydeh went live on Facebook to document the violence, before herself getting arrested. Three officers pulled her hair and pepper-sprayed her, she said. They were looking for her phone, which she managed to hide.

“They beat me, they were cursing me, and they broke my necklace that bore my son’s name,” she continued. “I remember looking at my kids, who were screaming and terrified. I remember looking for my father-in-law, who is old and has diabetes and blood pressure.”

Inside the police station, an officer threatened Shraydeh to sign a document committing to respect the law, or else she would remain separated from her children that night. “I felt like he was blackmailing me, saying that we must sign this paper to see our kids,” she said.

Shraydeh was determined that she had not violated any laws, and she refused to sign. She was released around midnight. Her husband was released the following day, on charges of illegal assembly. His court hearing is set for Sept. 2.

Their children are now afraid of the police, said Aboudi. “They view them as forces who attack civilians, and not as forces who provide security.”

“My father told me he was too afraid that I would face the same fate as Nizar Banat,” Aboudi continued. “Following Banat’s murder by the security forces, people here have become anxious and genuinely afraid.”