A new report by Human Rights Watch documents dozens of cases whereby the Palestinian authorities in both the West Bank and Gaza use arbitrary arrest and torture to repress critics. 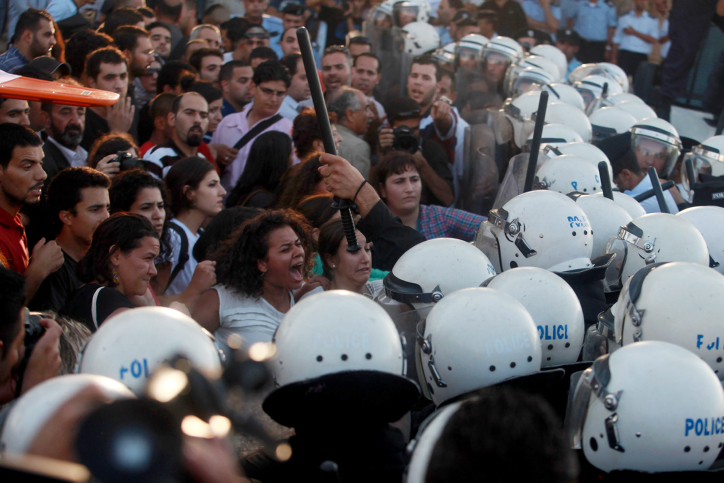 Palestinian protesters against negotiations with the Israeli government clash with Palestinian riot police on August 28, 2013, after protesters were banned from approaching Palestinian President Mahmoud Abbas’ headquarters in the West Bank city of Ramallah. (Issam Rimawi/Flash90)

A new Human Rights Watch (HRW) investigation published Tuesday draws on 86 cases of arbitrary arrest, abuse, and torture by Fatah and Hamas authorities in the West Bank and Gaza to call for an International Criminal Court probe, as well as a suspension of aid to Palestinian security forces. According to the report, acts of repression by the two Palestinian authorities against Palestinians engaged in peaceful speech and nonviolent protest “may amount to a crime against humanity.”

Citing the Palestinian Authority’s accession to “a range of international treaties,” including the United Nations Convention Against Torture, which the ruling Hamas government in Gaza has said it is also bound by, the report concludes that torture in both jurisdictions is systematic and amounts to official policy.

“The habitual, deliberate, widely known use of torture, using similar tactics over years with no action taken by senior officials in either authority to stop these abuses, make these practices systematic,” write the authors. “They also indicate that torture is governmental policy for both the PA and Hamas.”

In one case, a Gaza civil servant was arrested merely for being tagged in a friend’s Facebook post, which called for protests against the ongoing electricity crisis. Like several others cited in the report, he was subjected to “positional abuse” or shabeh — torture techniques widely used by Israeli interrogators — that made him feel “severe pain in my kidneys and spine” and as if his neck would “break” and his “body is tearing up inside.” 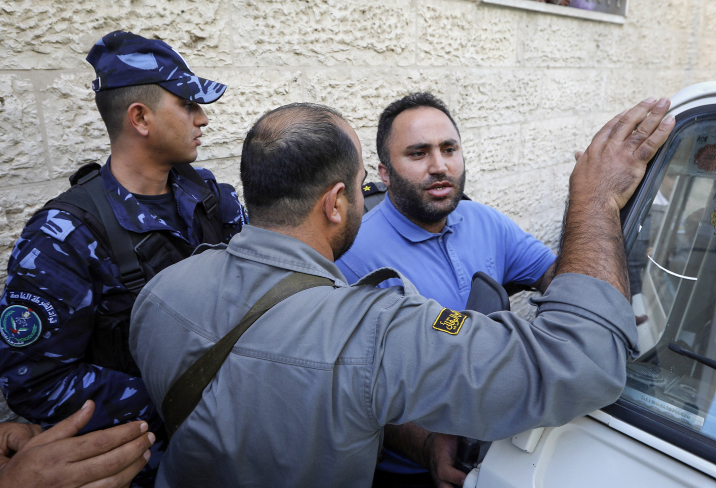 Issa Amro, a prominent Palestinian activist, is detained by Palestinian police in the West Bank town of Hebron on September 7, 2017, after criticizing the Palestinian Authority’s arrest of a journalist on social media. (Wisam Hashlamoun/Flash90)

Abdullah Abu Sharekh, a 55-year-old math teacher from Gaza, was arrested intermittently between January 2017 and January 2018 for criticizing a Hamas leader’s comments on Facebook. He spent long stretches of time in a room called “the bus,” where Internal Security agents force detainees to stand or sit in a small child’s chair for hours, sometimes days. “You can’t imagine how painful it was,” Abu Sharekh told HRW. “I decided to leave them alone, so they’ll leave me alone.”

In the West Bank, Alaa Zaqeq was detained for his university activism with the Islamic Bloc, a student group associated with Hamas. Intelligence Services officers handcuffed and blindfolded him, slammed him against the wall, then pursued to torture him. Zaqeq told HRW that an interrogator known as the “Juicer” told him he would “leave this place in a wheelchair.”

The findings are based on two years of research, including extensive interviews with former detainees, family members, lawyers, NGO representatives and a doctor. The data also includes written exchanges with the implicated security authorities in Ramallah and Gaza — translations of which are included in the report.

According to Omar Shakir, HRW’s Israel and Palestine director, the release of the report was planned to coincide with the 25th anniversary of the Oslo Accords, which gave Palestinians a degree of self-rule in the West Bank and Gaza. “The international community’s fixation with developing the capacity of Palestinian authorities has led it [to] downplay their pattern of repression,” said Shakir.

Addressing ICC Chief Prosecutor Fatou Bensouda, the group calls on her to “consider arrests and treatment in custody of detainees by the PA and Hamas, including the use of torture and arbitrary detention, as part of a future investigation of the situation in Palestine.”

The report’s strongly worded recommendations come on the heels of last week’s ICC warning that Israel’s threatened demolition of Khan al-Ahmar, a Palestinian village located on land that is the last link in a ring of planned Israeli settlements sequestering Jerusalem from the West Bank, would be investigated as a “war crime.”

Human Rights Watch also calls on the United States, the European Union, and others to suspend security assistance to any PA arm engaged in arbitrary arrest or torture while urging Iran, Qatar, and Turkey to take similar measures against the Hamas-run security services. U.S. “non-lethal assistance” to the PA is slated to reach $60 million this year, with a further $35 million budgeted for 2019.