On Friday morning, the Palestine national soccer team will face off against Jordan, a team with a majority of Palestinian players, in the Asian Cup. Whether they choose to or not, the 22 players on the field will tell the story of refugees, occupation, checkpoints and the connection between home and diaspora. Oh, and they’ll also play soccer. 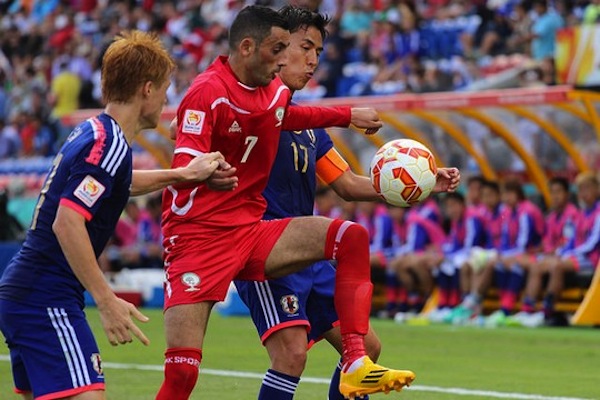 May 30, 2014 will go down as one of the biggest days in the history of Palestinian soccer. It happened far away from home, in Malé, the capital of Maldives. Palestine made it to the final round of the AFC Challenge Cup – a tournament whose goal is to promote soccer among “developing” countries, especially ones who are beginning to invest in sports, and which includes Laos, Pakistan, Sri Lanka and India. The winner of the cup automatically participates in the Asian Cup, the most important tournament in the continent, which takes place every four years. Palestine did especially well, beating Bangladesh, Burma, Kyrgyzstan, Nepal and Afghanistan on its way to the final.

Palestine faced the Philippines in the final. The first half ended without scoring; but in the 58th minute the Palestinians got a free kick, and two players were seen standing next to the ball. Ashraf Nuaman, a Bethlehem native who plays in the Saudi league, and Nablus’ Murad Ismail Said, who plays for the Hilal Al-Quds Club in Jerusalem. When we return from commercials, it feels like the Qatari commentator knows something we don’t. He repeats Ashraf’s name time after time after time. Finally, Ashraf lets fly a kick to the top left corner, leaving no chance for the goalie. Thirty minutes later, with the final blow, Nuaman and his friends celebrate the team’s most important victory to date.

WATCH: Ashraf Nuaman scores the game-winning goal against the Philippines

The connection between sports, national identity, politics, society and struggle has been studied countless times. But without going too deep into the subject, there is no doubt that the Palestinian team is one of the most prominent examples of the ability of a national soccer team to make significant gains that precede even the establishment of Palestine’s national, sovereign institutions.

When FIFIA officially recognized Palestine’s national soccer team in 1998, it was one of the first international organizations to recognize Palestine as a state. The decision, along with FIFA President Sepp Blatter’s trip to Gaza in 1998, forced the world to get used to “Palestine,” whether or not it was a state with borders. It seems that since then, Israel still feels the need to talk about “the Palestinian team” or “the Palestinian coach.”

The Palestine national team will go to the Asian Cup, currently taking place in Australia, in order to put Palestine on the map. Palestinian President Mahmoud Abbas event sent a message to the players before they left for Australia, in which he called sports “an important weapon in politics.” Goalie Ramzi Saleh, 34, who was born in Egypt to parents from Gaza, stated that “our participation in the tournament sends a message to the world… to show that despite the destruction… we exist.” Ahmad al-Hassan, the professional manager of the team, said that “through the team, we hope to achieve a political goal – to prove that we are worthy of an independent state with its own institutions, despite the occupation, despite the separation between Gaza and the West Bank and despite the war against us…”

From Hapoel Jerusalem to the Palestine national team

Al-Hassan knows what he is talking about. When the Palestinian people are divided – whether in the West Bank, Gaza, Israel, Jordan, Syria, Lebanon and Egypt, or across the ocean in Europe or the United States – its national team suffers from the near-impossible difficulty of bringing players together to practice and get to know one another. On the other hand, new FIFA rules allowing players who do not hold the same passport to play for the same national team (as long as they have not previously played for a different national team), have created a reality in which the Palestine national team, more than the Palestinian Authority or the PLO, represents the Palestinian dream of unity and return. This is likely the reason behind appointing a political figure such as Jibril Rajoub the chairman of the Palestinian Soccer Association. 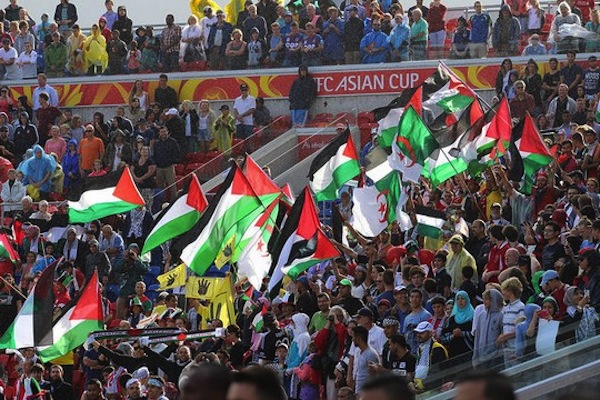 The Palestine national team is one of the few opportunities for residents of the West Bank, Gaza, the United States, Chile and, most importantly, Israel, to implement their own brief Palestinian Law of Return. This is evidenced by the fact that four of the team’s players have Israeli citizenship, such as Hussam Abu Saleh from Sakhnin (who helped Bnei Sakhnin win their first Israeli league championship in 2004). Another is Murad Alyan from Jerusalem’s Beit Safafa neighborhood, who began his career with the Hapoel Jerusalem youth league. They play alongside Alexis Norambuena, whose parents are Palestinians who moved to Chile, and Abd al-Latif Bahadri, a Palestinian from Gaza who currently plays for the Al-Wehdat SC club in Jordan, which is most closely identified with the Palestinian population in Jordan and is named after a refugee camp in Amman. They all play alongside Palestinians who participate in the West Bank league, as well as Palestinians who play in Europe. Together they make up a microcosm of the Palestinian people who despite all the odds – from detaining players to blowing up the team’s training field – have been able to continue to the next round of the most important soccer tournament in the continent.

Meanwhile, the tournament has begun and the Palestine national team was placed in Group 4 alongside Japan (ranked 54th in the world), Jordan and Iraq. Palestine lost its first game to Japan, with a score of 4-0. Jordan lost to Iraq, which means that Friday’s game between Jordan and Palestine will determine which one gets to move on to the next round.

On Friday, January 16, 2015 at 9 a.m. – Gaza, Jerusalem, Sakhnin, Amman and Bethlehem time – the players of Palestine’s national team will play against Jordan’s national team, which includes several Palestinian stars. On the field will be 22 players who will tell the story, whether they choose to or not, of Palestinian refugees, the present absentees, the occupation, the checkpoints and the connection between home and diaspora. Oh, and they’ll also play soccer.

For Ashraf Nuaman, the big star of the Maldives game, there is no doubt as to why the team has gotten to this point. “Our goal is to show the world that the Palestinian team is always moving forward, despite all the difficulties,” he told a French medial outlet, before adding a sentence that could easily apply to most of Jordan’s players: “And we also got here because we wanted to bring back a smile to our people’s face.”

Yonatan Mendel is the projects manager of the Mediterranean Unit at the Van Leer Jerusalem Institute, and co-editor of the book review section of the Journal of Levantine Studies (JLS). This article was first published on +972′s Hebrew-language sister site, Local Call. Read it in Hebrew here.

Related:
On violence, soccer and occupation – how is Israel different?
WATCH: What happens when a racist Jewish soccer fan meets an Arab player?