Bil’in protest leader Abdullah Abu-Rahme: If Israelis must decide between Labor and Likud, they might as well just vote for Liberman instead. 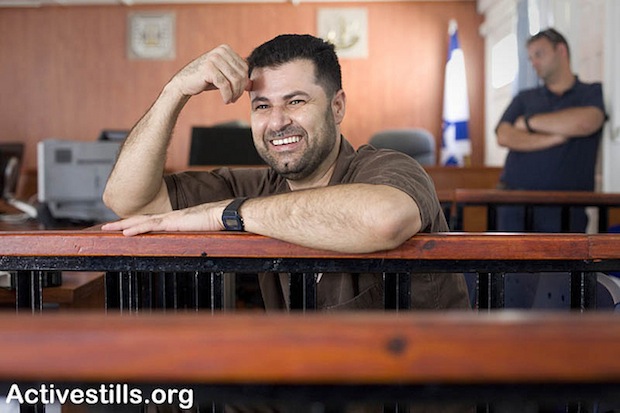 The residents of the West Bank village Bil’in are in close contact with the Israeli state. For the past ten years, they have been waging a popular struggle against the separation barrier that has cut them off from most of their land, while withstanding heavy oppression from the army, including arrests, tear gas, raids on the village, and more. As non-Jewish subjects of military rule in the occupied territories, the residents of Bil’in have no right to vote in the elections, and thus cannot decide who will make the up the next government that will decide their fate. However, some of them know very well who they would like to see in the Knesset.

“We hope that the Joint List succeeds, and that it will be the third largest party in the Knesset. It is simply wonderful that the Arab factions are running together,” Abdullah Abu Rahmah, a central organizer of Bil’in’s nonviolent protests, told +972. “I also hope that Meretz succeeds, despite the fact that they are losing their strength. I hope that the Palestinians on the ‘inside’ [Palestinian citizens of Israel, H.M.] go out and vote, because anyone who does not vote only strengthens the right.”

Abu Rahmah, who was recognized by the European Union as a Human Rights Defender, was recently levied a fine and a suspended sentence after being convicted last October of interfering with the work of a soldier for an incident in May 2012, when he stood in front of a bulldozer that was clearing land to build the separation barrier near Ramallah.

“Today there are over 600,000 settlers, and their influence on Israeli politics is only growing,” says Abu Rahmah, “The answer to this is the Joint List and Meretz, who I hope will get seven seats so that Gaby Lasky is elected.” Lasky is a human rights attorney who has worked on many cases pertaining to Palestinian and Israeli anti-occupation activists, including that of Abu Rahmah. “It is true that Lasky supports us as an attorney, but we need her in the Knesset alongside Dov Khenin.”

“It is necessary to have a large bloc of leftists and Arabs. And yet, if Labor wins… it won’t be so good. There is no real difference between Labor and Likud, in this sense we much prefer Likud. Labor has better relations with the international community, but they are no different when it comes to policies. They do not promote peace, they build settlements, they build walls and they go to war. And yet they get legitimacy from the world. We might as well have Liberman, who only damages Israel’s international relations. Mahmoud Abbas has been gaining more support than Netanyahu one the past few years, and if Herzog or Livni win, it will only delay the necessary pressure on Israel.”