Bassem Tamimi, one of the leaders of the popular unarmed struggle in Nabi Saleh, was sentenced Tuesday to 13 months in prison – the period of time he has already served. Tamimi: “The court sent political prisoners a clear message that they are better off confessing to what they have not done”.

Tamimi, one of the most prominent activists in Nabi Saleh who has stated countless times his commitment to nonviolent resistance, was arrested in March 2011 and charged with a series of accusations revolving around the demonstrations in his village. Two weeks ago he was acquitted of incitement, yet convicted of organizing and participating in illegal marches, and of solicitation to throw stones. 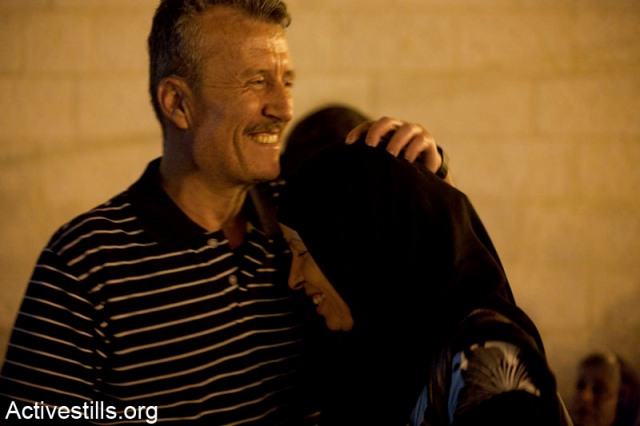 Tamimi’s whole trial revolved around three main Palestinian witnesses, two of them minors, whose testimonies were given in questionable and partly illegal interrogations. The Ofer Military Court decided to strike two of these due to severe breaches in protocol committed by police interrogators, and based the conviction only on one testimony by a 15 year old.

Diplomats from several countries attended the trial regularly, as Tamimi was defined a prisoner of conscience by Amnesty International. Following his conviction, EU’s foreign policy chief, Catherine Ashton, said the EU is “concerned at the use of evidence based on the testimony of a minor who was interrogated in violation of his rights.”

At the sentencing on Tuesday, Tamimi received 13 months in prison and 17 more on probation – which will be imposed if he is again convicted of any demonstration-related offences. The number 13 was not chosen randomly. In fact, it is the exact period that Tamimi had already sat in prison awaiting his sentence. The military court commonly uses this tactic of sentencing Palestinians to the exact same period they have already served – a tendency that has led many to feel that speedier trials could result in shorter prison sentences.

This feeling is strengthened by the fact that Tamimi’s partner in protest, Naji Tamimi, who was charged with the same offences as Bassem, was recently released as part of a plea bargain after only 12 months – even though as part of the deal he confessed to crimes Bassem has been acquitted of.

“The military court, being an instrument of occupation, sent a clear message today that Palestinian political prisoners are better off confessing to what they have not done than go to trial,” Bassem Tamimi said following his sentencing. “I was acquitted of the bulk of the indictment against me, but served more time than my friend who chose to plead guilty to all the charges in a plea bargain. Had I confessed to what I was not convicted of, I could have returned to my family earlier.”

On this note it is worth mentioning that the conviction rate against Palestinians in military court stands at 99.74 – a grim figure which leads most to settle the charges against them with plea bargains. 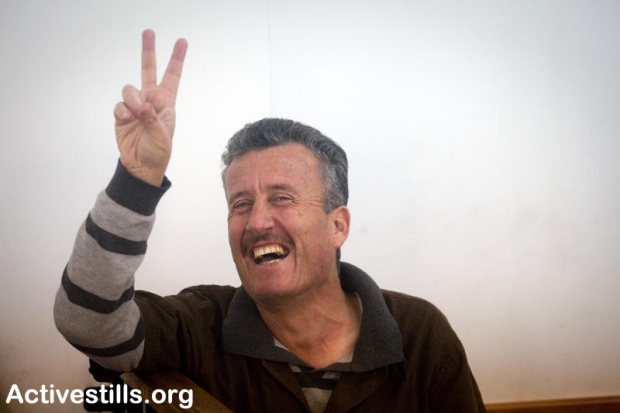 Already in the beginning of his trial last June, Tamimi announced that he does not recognize the legitimacy of the Israeli military court system to try him. As part of his opening speech he said these words:

Our demonstrations are in protest of injustice. We work hand in hand with Israeli and international activists who believe, like us, that had it not been for the Occupation, we could all live in peace on this land. I do not know which laws are upheld by generals who are inhibited by fear and insecurity, nor do I know their thoughts on the civil resistance of women, children and old men who carry hope and olive branches. But I know what justice and reason are. Land theft and tree-burning is unjust. Violent repression of our demonstrations and protests and your detention camps are not evidence of the illegality of our actions. It is unfair to be tried under a law forced upon us. I know that I have rights and my actions are just.

Tamimi is but one of the many activists in the Palestinian popular unarmed struggle who have been arrested in recent years and who have spent between several months and two years in prison for demonstrating. Just recently an Israeli official acknowledged the fact that undercover law enforcers were sent to infiltrate demonstrations in Bil’in to throw stones at soldiers and create the impression that demonstrators were the ones starting the violence. As IDF Maj.-Gen. Amos Gilad once said: “We don’t do Gandhi very well.”