The restrictions on movement between different neighborhoods of Hebron meant that a number of Palestinian activists, who were on their way to an iftar meal in Tel Rumeida, were compelled to break their fast sitting on the ground at a checkpoint instead. Ramadan, the holiest month for Muslims across the world, is a time for family get-togethers, especially around the Iftar meal, which breaks the day-long fast every evening. Extended families gathering for a meal — what could be more trivial than that? Except if it happens in Hebron, where nothing is as trivial as it seems.

Several members of Dismantle the Ghetto, a group that was established February of this year and includes activists from different factions and human rights organizations in Hebron, were invited last Saturday for an Iftar meal at a friend’s home in the neighborhood of Tel Rumeida.

“There was only one problem,” says Badie Dweik, one of the organizers. “We needed to pass a checkpoint through which we weren’t allowed on the way. Israel announced a number measures to ease freedom of movement during Ramadan, including an additional 700 entry permits into Israel for residents of the West Bank, an incredibly low number. But the joke is even sadder when it comes to the residents of Hebron. We don’t even have the most basic right to movement.”

When the activists arrived in Tel Rumeida on the way to the meal, soldiers at the checkpoint began checking their identification cards. Beginning in October 2015, Tel Rumeida was deemed a closed military zone and residents of the neighborhood were forced to register with the military authorities, in order to confirm the fact that they indeed are residents of the neighborhood. Only those registered as residents are allowed entry. 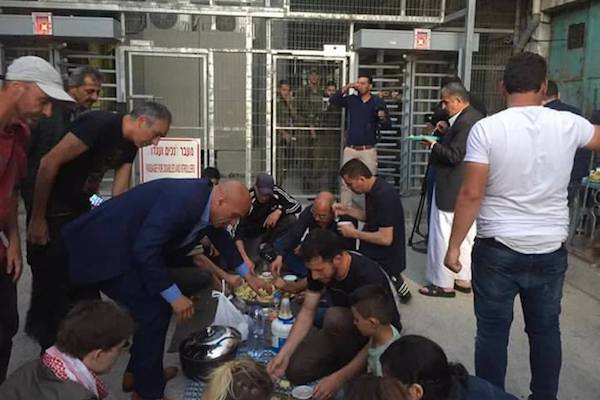 Because a number of Dismantle the Ghetto activists are not residents of Tel Rumeida and cannot enter the neighborhood, they decided to break the fast at the checkpoint itself. “With no other choice, we spread out the blankets on the ground and began serving the traditional maqlouba,” says Dweik. “This is the reality in Hebron. We cannot even break the fast together, if we want to be humans and not numbers.”