Another attack took place last Friday, in a gas station, against a Palestinian worker. All of these attacks have one thing in common: groups of racist Jewish groups feeling safe enough to attack Palestinians without fear of being brought to justice. The Israel Police is yet to deal with this epidemic in the city, or work to protect Palestinians as it works to protect Jerusalem’s Jewish population. 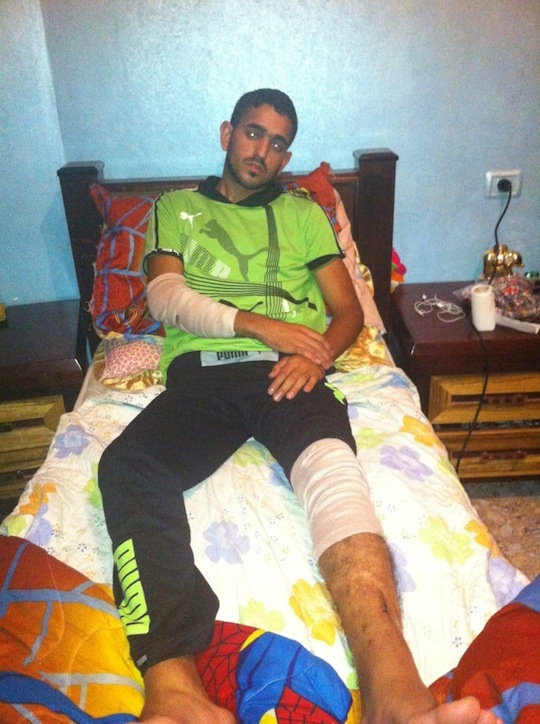 Nassim Abu Ramuz, who was attacked by Israeli Jews in Jerusalem on Friday, September 7, 2012

To understand these attacks more, I spoke with Nassim Abu Ramuz, 21, from East Jerusalem and learned from him about his confrontation with three Jewish men at his work. Below is the interview.

Where do you work?

I work in a gas station in Katamon. I have been working there for three years.

Were you ever attacked or assaulted before while working there?

No, Things were okay until this event.

So, tell me what happened on that night you were attacked.

I was doing the night shift, there is not much work so I work on my laptop. A car pulled in with three men and a woman. The woman asked for the bathroom key and I gave it to her. Then one of the guys called me to fill gas with NIS 20. I asked him to turn the car around because the gas tank was on the other side. He said that he was tired and high, so I pulled the gas pipe toward the other side of the car.

Did you notice anything wrong with them?

They had beer with them, they might have had too much to drink.

They were cussing at each other in the car. One of the guys came out from the car. He said that he needed help because the car was overheating. I helped him and gave him water to add to the radiator.

It seems you got a long okay, how did the violence start?

The other guy in the car threw a bottle of beer in the water bucket that customers use to clean car windows. I asked him why he did that and told him not to do such things. He started yelling at me saying “You are disgusting Arab, you don’t tell me what to do, you live in our city, we do what we want here, we can kill you if we want.” I could see anger and violence on his face.

What did you do then?

I walked away towards my office, I pressed the emergency button which starts the alarm and calls security. The same guy heard the alarm and came towards me. He said, so, you are calling the police! You think something will happen to us? I am not afraid and I am going to kill you. You are disgusting Arab, and started cussing at my mother and sister using an word Arab between every other word. Suddenly he walked towards me and started punching me, and the other two guys ran out of the car and held me while the other guy hit me. Then they threw me on the ground and they kept kicking me and hitting me.

What made them stop?

Fortunately, a few minutes later, group of workers at the Dominos Pizza nearby passed by the gas station after finishing their shift. They saw what was happening and came and pulled these guys away from me. They saved my life.

Did you call the police?

Yes, The police came, I told them what happened. We have cameras at the station so they could find out the car number and all the details they needed. Then they left. They told me that they will find them and bring them to justice. I on the other hand went to Shaare Zedek hospital in Jerusalem.

The police were contacted by Ynetnews on Saturday night and they said the “were aware of the case and that it will be investigated once a complaint is filed.” So, they are not looking for the perpetrators because you didn’t file a complaint yet. But you say they came and took your testimony on site.

What was the reason these guys attack you? Was it alcohol or is it another reason?

One of them was shouting, “You disgusting Arab, I am going to kill you.” It was clear that they attacked me for being an Arab. They didn’t see me as a human being, they didn’t care about hitting me. Maybe alcohol made had an effect but I don’t think they would have attacked me if I were Jewish.

Are you afraid to go back?

I told my boss at the gas station that I am not going to work night shift again. I don’t want to put my life in danger. I was lucky that the Dominos Pizza guys heard me and saved my life otherwise I would have been dead. It is not worth it to work the night shift and be killed.

What do you want to happen to the perpetrators?

I want them to be held responsible for what they did to me. They should be arrested and taking to court and sentenced.

Do you believe the police will be arrest them and charge them?

I can’t tell. From what I hear and know it is hard to believe something will happen to the guys who attacked me. I am worried that the police paid me lip service. They have all the evidence they need to get them and charge them. It is up to them to really make it happen or not. The perpetrators called the Dominos Pizza shop and asked them to organize a sulha [reconciliation] between me and them. I refused and passed the phone number to the police. These guys are not hiding so there is no excuse for the police not to arrest them.

Why is your faith in the Israeli police is so shaken?

Do you believe there is a chance that coexistence can happen in Jerusalem between Jews and Arabs?

From the news and reality on the ground. I don’t have much faith in peace or reconciliation anytime soon. things are getting worse. As I said, attacks against Palestinians happen every day in Jerusalem. People say peace needs to happen between people, but I am not sure it is possible. Maybe if our politicians make a decision for peace, it can happen.

At this point, Fathi Abu Ramuz,  Nassim’s father, joined the conversation to contribute a few points. Fathi was more expressive and perhaps more angry than his son. He stressed:

When an Arab attacks a Jew in Jerusalem or anywhere, the Israel Police declares an emergency and the Palestinian is caught within minutes or hours. However, when a Palestinian is assaulted, the police do nothing even when they have all the evidence in their hands.

I believe the police wants the violence against Arabs. The country lack of response to attacks against Arabs is a proof that it is encouraging these attacks. The youth that are going around attacking Arabs are carrying the policy of the Israeli state. Their hatred is coming from their government.  So I say to the police, please make a decision to stop violence. Enough is Enough.

They might ask you why you choose to work in an Israeli place?

I live in Jerusalem, I have to work in Jerusalem. You came to Jerusalem after me.  If you don’t want us to work here give us our state and we will not work in your shops. But if you hire our children then you have to guarantee their safety. You cannot hire our children to be attacked and killed and then ask us to do nothing about it. You are generating violence by allowing these attacks. You are feeding into racism.

Are you hopeful that the guys who attacked your son will be brought to justice?

I hope so, but I am not delusional. The police works from racist ideology themselves. If they wanted to catch the perpetrators they could have already. These guys are free because the police doesn’t care. So, I am pessimistic. but I hope they prove me wrong and deliver on their promise of bringing us justice.