The medical care Ahlam Abu Musa needs isn’t available through Gaza’s debilitated health system, but the Israeli army has denied all four of her exit requests. 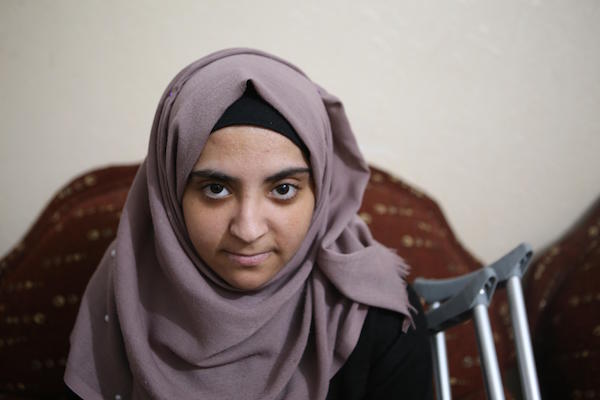 Ahlam Abu Musa, 20, was diagnosed with cancer in May 2018. The treatment she needs is not available in the strip, but the Israeli army has denied her multiple requests to exit through the Erez Crossing. (Photo by Amjad Yaghi)

Ahlam Abu Musa was diagnosed with bone cancer last May. The 20-year-old from Shaboura refugee camp in Rafah, south of the Gaza Strip, has since tried to obtain an exit permit to receive treatment at Al Makassed Hospital in East Jerusalem, but the Israeli army has denied her multiple requests.

Ahlam sought care in hospital after hospital, but Gaza’s health system is dealing with severe shortages in supplies, and the lines of patients awaiting treatment at government-funded hospitals is especially long.

By the time a doctor could finally examine Ahlam, he misdiagnosed her condition. She was first told the pain she felt was a result of a broken foot. When the pain grew worse, Ahlam went to see another doctor, who discovered a cancerous tumor in her left foot.

According to Dr. Jamal Abu Hilal, the orthopedist treating Ahlam, the cancer is spreading rapidly, and it needs to be monitored carefully. Dr. Abu Hilal is refusing to operate on Ahlam, however, because the medical equipment required to conduct the surgery is not available in Gaza, he said.

Ahlam and her mother then began making arrangements to have her receive treatment outside Gaza. The mother and daughter first submitted a permit request to leave the strip through the Erez Crossing in late July, both were denied. They tried again in October through the Palestinian General Authority for Civil Affairs, but their request was denied again based on security concerns. Their third attempt, in December, was also denied.

Shortly after, Ahlam’s family managed to secure donations to cover the costs of the surgery at a hospital in Jordan, and the procedure was scheduled for late January. When they applied for an exit permit the fourth time, their request was denied yet again.

Ahlam’s mother, Wahida, is the family’s sole provider. Her father has been unemployed for years, and suffers from diabetes and high blood pressure. “We’re not affiliated with any political party to be denied a permit based on security reasons,” said Wahida. “I don’t know what we did to be punished this way.”

Ahlam says the pain has gotten so intense, she can’t sleep at night. “I can’t build a future for myself in this condition. I’ve been stuck at home since May,” she said. “All I want is to have the surgery so that the pain can go away. Why are my mother and I being denied a permit? We don’t pose any danger to Israel.”

According to a response received on Feb. 10 from the Coordinator of Government Activities in the Territories, the Israeli military body responsible for administering the occupation, “over the past few years we have witnessed a significant increase in the number of requests submitted by Palestinian residents of the Gaza Strip for permits for medical and humanitarian purposes,” and in 2018, there was a 15 percent increase in the number of permits issued to residents of Gaza for medical and humanitarian purposes relative to the prior year.

Regarding Ahlam’s case, COGAT noted that “in contrast to what was claimed in the article regarding Ahlam Abu Musa, two applications for medical permits were sent to the Coordination and Liaison Administration to Gaza requesting permission for her to exit the Strip in order to receive medical treatment that is available in Gaza. For privacy reasons, we are unable to go into further detail, but we do note that the treatment in question is not a treatment for cancer.”

Since Hamas took over Gaza in 2006, Israel has allowed Palestinians to cross through Erez only based on “specific Israeli-defined categories,” according to the Office for the Coordination of Humanitarian Affairs (OCHA) in the occupied territories.

Patients in Gaza are referred to hospitals in East Jerusalem when they require treatments that aren’t available in most of the occupied territories, due to Israel’s restrictions on goods, including medicine and medical equipment, as well as fuel for electricity. According to OCHA, most referrals are for cancer treatment.

Based on data collected by Gisha, an Israeli rights group that focuses on freedom of movement in and out of Gaza, in 2018, a total of 103,325 Palestinians were allowed to exit Gaza through the Erez Crossing, of which 30,174 were patients and their companions. The resulting average of exits per month last year was higher than in 2017, but lower than the monthly averages for 2015 and 2016.

Editor’s note:
The article was updated on Feb. 11 to include a response from the Coordinator of Government Activities in the Territories.