Mohammad Saba’aneh, an important Palestinian political cartoonist, has been in prison for about a month now. Friends and supporters suspect his detention is related to the growing protests on the issue of Palestinian prisoners and the international concern over hunger strikers, including a new resolution in the European Parliament. 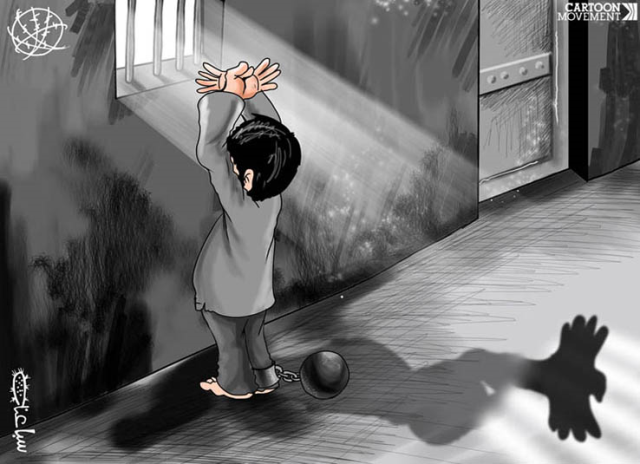 A recent drawing of Saba’aneh’s

Mohammad Saba’aneh (30) was arrested on February 16 while returning from a work-related trip to Jordan. After taking part in an Amman conference of the Arab-American University in Jenin (a private institute that works in coordination with the PA’s Ministry of Education and the California and Utah State Universities), where he works in the spokesperson’s office, Saba’aneh was captured by Israeli authorities at the Allenby border crossing and taken for interrogation.

The young cartoonist, whose drawings are regularly published in the Al-Hayat al-Jadida newspaper, was not allowed to see an attorney for the first three weeks of his interrogation, and so far, no official charges have been brought against him. The Ofer Military Court has prolonged his detention time after time, and an appeal against the latest addition to his detention was denied by the Military Appeals Court on Monday. Attorney Jawad Boulos, who was finally allowed to see Saba’aneh last week, told his family that he is doing well and that he is being broadly interrogated for allegedly aiding an illegal organization. Last week, soldiers raided the family’s house and arrested Saba’aneh’s brother, and confiscated computers.

Since his arrest, local and international artists and journalists have been calling for Saba’aneh’s release, claiming that his only crime is criticizing the occupation with his pen and palate of colors. The Palestinian Journalists’ Syndicate, Reporters without Borders, the Committee to Protect Journalists and several Israeli cartoonists and artists have already taken a stand against their colleague’s prolonged detention without charge, and some demonstrated outside the courthouse during the latest detention hearing. Cartoons advocating his release were published on the Cartoon Movement website, and other works of art by Israeli artists were gathered as a form of petition in the Erev-Rav website. “As Israeli artists we call for the release of Mohammad Saba’aneh,” they wrote, “his pictures of reality are not a crime – reality itself is the crime, and the criminals are the ones who had made it so.” 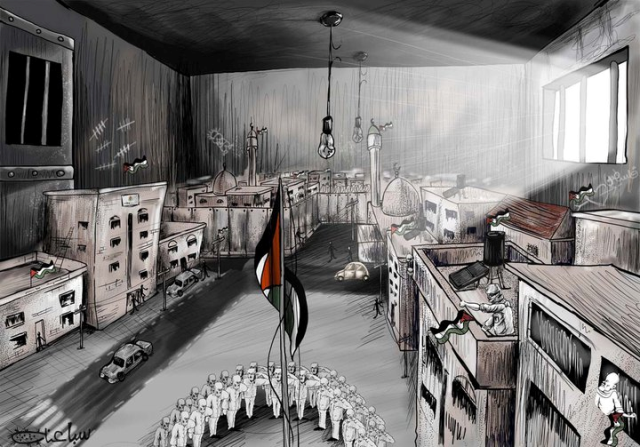 The independent prison of Palestine according to Saba’aneh

Members of the Saba’aneh family, who have not yet been allowed to see their son, also released a statement, calling on individuals and NGOs around the world “to work hard to save our son and all prisoners from the Occupation prisons to end their suffering by raising their case in international forums to assure their safety and their legal right.”

Saba’aneh’s friends and colleagues fear that the real reason for the detention is the cartoonist’s devotion to the issue of Palestinian prisoners, shown in many of his recent works. In other works, collected by Haaretz columnist Tamer Masalha (Hebrew), the cartoonist has also been critical of the illusion of an “independent” PA, and of the sad results of the Arab Spring.

The IDF Spokesperson’s Office did not respond to a request for comment by the time of this report.

Criticism of the artist’s detention is mounting while the general struggle for the Palestinian prisoners grows. It has been almost six months since the start of administrative detainee Samer Issawi‘s hunger strike, who is only taking intravenous minerals and drinking water. The recent death of detainee Arafat Jaradat in an Israeli prison sparked more protests throughout the West Bank and for more than 40 consecutive days, small vigils have been taking place in Jaffa. 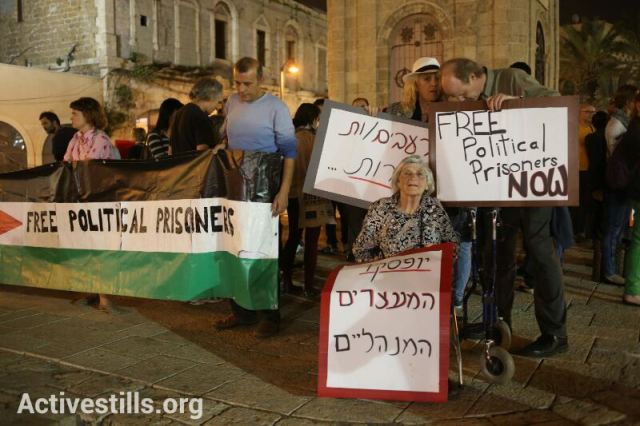 A vigil in Jaffa this week. More than 40 consecutive days of protest (Yotam Ronen / Activestills)

The death of the inmate and the practice of arbitrary administrative detentions also led the European Parliament to vote in favor of a motion to investigate Jaradat’s death. The resolution also stated that the EU is “concerned by the Palestinian detainees held in administrative detention without charges, stresses that these detainees should be charged and face trial with judicial guarantees in accordance with international standards, or be promptly released.” The Parliament also stated it would consider sending a fact finding mission on the issue of prisoners and detainees to Israel-Palestine.

Update, 19.3: The Military Court has just added three more days to the detention of Saba’aneh.