Palestinian children in Israeli jails classified as ‘security prisoners’ are denied the right to speak to or see their families, sometimes for months on end. 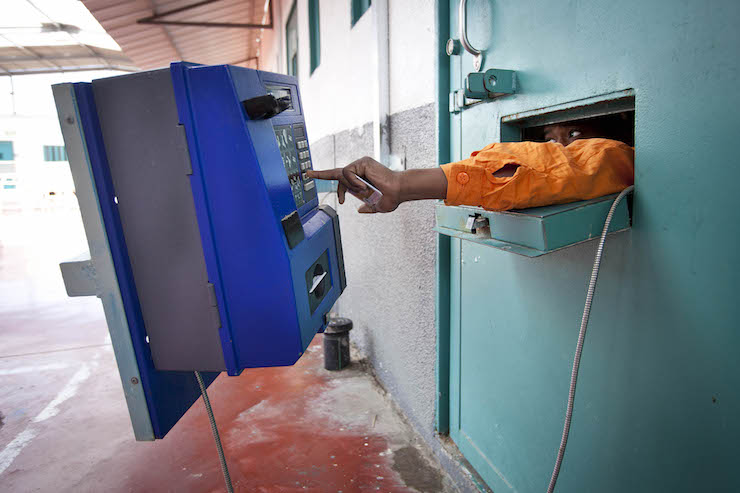 Israel’s top court will hear arguments about whether Palestinian children held in Israeli prisoners should be allowed to call their parents on the phone.

Palestinian minors classified by Israel as “security prisoners,” including those awaiting trial for crimes such as stone throwing, are subject to numerous restrictions identical to those imposed on adult prisoners such as the denial of telephone contact with their parents.

The prison service allegedly refuses to treat minors classified as “security prisoners” according to Israeli laws and rules regulating the treatment of children.

According to Israeli human rights organization HaMoked: Center for the Defence of the Individual, which petitioned the court, the Israel Prison Service imposes these restrictions on all minors, without considering the severity of the allegations or the length of the prison term.

Palestinian minors in the West Bank, as opposed to those arrested in East Jerusalem and Israel, are often prevented from contacting their parents for months on end, well into their incarceration, since their parents must undergo a lengthy process to obtain a permit to visit them in prison ­— even if those prisons are inside the West Bank.

According to testimonies collected by HaMoked and many other rights groups over the years, Palestinian minors are systematically denied any contact with their parents upon arrest and are interrogated without the presence of one of their parents, contrary to legal requirements inside Israel. Those testimonies also show that Israeli interrogators often resort to verbal and physical violence, solitary confinement, and the denial of the right to see an attorney.

The petition argues that it is crucial for Palestinian minors to be allowed to have regular phone contact with their parents, while detailing the psychological damage that they may face in absence of those phone calls.

One 15-year-old Palestinian boy imprisoned by Israel told HaMoked about how he had yet to contact his parents two months after he was arrested in the middle of the night.

“I haven’t received a visit,” a press statement from HaMoked quotes the boy, identified only as K.N., as saying. “I still haven’t talked to them [the family] at all. There’s no phone and no possibility of making phone calls from prison to the family… I miss everyone, and I don’t know when I’ll see them.”

The way the IPS classifies and treats Palestinian minors is “contrary to the language and spirit of the Israeli law relating to minors in custody; disregards the principle of the child’s best interests, which constitutes a binding basic principle for any action by a state authority; and contravenes international law, primarily the Convention on the Rights of the Child, to which Israel is signatory,” according to HaMoked.