We are an integral part of the Palestinian people, yet we are virtually invisible for those in the White House who claim to care about Christianity. 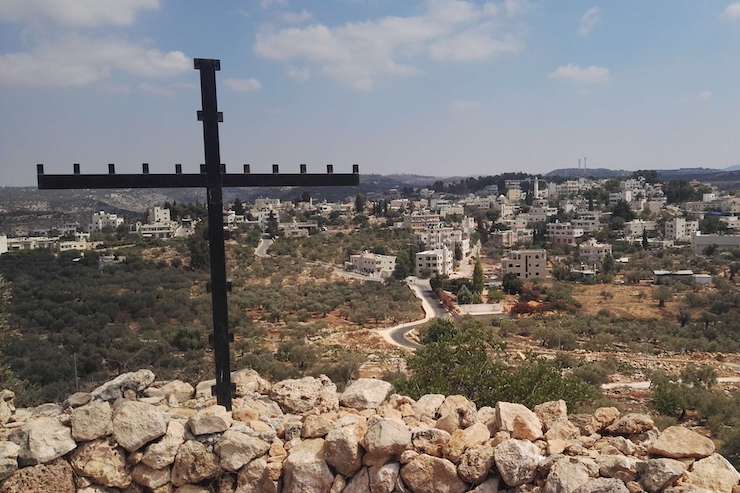 A photo taken near the ruins of the shrine of Saint Barbara in the West Bank village of Aboud. (Bukvoed/CC-BY-4.0)

When Israel barred Reps. Rashida Tlaib and Ilhan Omar from visiting Palestine last week, it was a clear attempt to keep the congresswomen from witnessing the impacts of military occupation for themselves. This decision, however, also revealed the extent to which the very leaders who claim to care about Christians in the Middle East are willing to weaponize religion.

I was supposed to meet with the congressional delegation. My plan was to introduce them to the reality of my people, and particularly the Christian Palestinian community, by telling them about Aboud, the village I have been serving for over a decade. I was hoping that our village could symbolize not only the hardships of life under military occupation, but also a message of hope for the prospects of peace through the fulfillment of the rights of everyone, including the right for Palestine to be free.

Aboud is located around 30 kilometers (18.6 miles) northwest of Jerusalem and has a population of around 2,000 people. I serve in a church that has had uninterrupted services since the year 332 AD. The Church of Saint Mary was built at the same time as the Church of the Nativity in Bethlehem and the Church of the Holy Sepulcher in Jerusalem. Historically, Aboud had around nine churches and monasteries, including the shrine of Saint Barbara, which dates back to the fifth century and was blown up by the Israeli army in 2002.

We are a village full of history yet almost no pilgrims or tourists visit us. The fact that Aboud was part of the path taken by the Holy Family from Jerusalem to Nazareth doesn’t seem to impress those in charge of making touristic packages. Instead of having a responsible and ethical pilgrimage to the Holy Land, including engaging with the local population, visitors prefer to tour stones without getting to appreciate the traditions and customs of those who have been taking care of those places for centuries.

Three settlements, Halamish, Beit Aryeh, and Ofarim, have been built on our village’s land. The existence of these Jewish-only settlements has become part of the daily nightmare that our people must endure. Aboud, known historically as the “City of Flowers,” once had enough water to survive on its own. Today, its main water resources are under Israeli control, and mostly serve the Israeli settlements nearby. Some of our villagers have access to their own water only if they buy it from an Israeli company.

Aboud has been deprived of developing almost 12,000 dunam of land (2,956 acres) due to restrictions imposed by the Israeli occupation. In other words, there are only 2,000 dunams, or 608 acres, available for development. This has dealt a major blow to our local economic and housing needs. Young people today can’t find affordable places to live, and many are leaving our village.

While some prefer to talk about Christians leaving this region, we have chosen to set an example of resilience by doing everything possible to stay on our land. That is why, with the initiative of our own community, we are developing housing and tourist plans with one main goal in mind: to keep a strong and vibrant Christian presence in the birthplace of Christianity.

In this context, we can understand why neither President Trump nor Prime Minister Netanyahu wanted the congressional delegation to visit Palestine. It is not only the reality of the occupation that they did not want Tlaib and Omar to see, but particularly how it affects Palestinian Christians. We are an integral part of the Palestinian people, yet we are virtually invisible for those in the White House who claim to care about Christianity.

When they talk about “Christianity,” they seem to be reading from a different Bible: we talk about a God of love and compassion, while what we mainly hear from them is about hatred and the political use of religion. Our region knows exactly what happens when holy books are used to justify crimes.

On Dec. 16 and 17 we will be celebrating – once again without much fanfare, as we have done for centuries – the feast of Saint Barbara, one of the most important pre-Christmas celebrations in the Holy Land. Our families will be celebrating an ancient festival that very few get to see simply because places like Aboud, and others such as Burqin, Taybeh, Jifna and even Nablus and Jericho, are rarely visited by foreign Christian tourists.

We open our arms to Representatives Rashida Tlaib and Ilhan Omar, as well as other members of Congress, to join us for the celebration of Saint Barbara. Here they will meet a proud people that have carried on their traditions for generations and will continue to do so. All we are asking for is actions that will help us achieve what any human being wants: to live in dignity, freedom, justice and peace.

Fr. Emmanuelle Awwad is the parish priest of the Palestinian village of Aboud.