Amad Abu Sharah was walking home from morning prayers when he was allegedly jumped by a group of men with sticks. 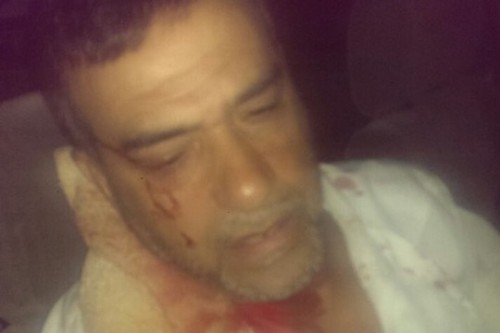 Palestinian resident of Lydd, Amad Abu Sharah, after he was attacked in the early hours of the morning, allegedly by religious Jews. (photo courtesy of ledawy.net)

Amad Abu Sharah, a Palestinian citizen and activist from Lydd (Lod in Hebrew), was attacked in the early hours of Sunday morning at the entrance to his house on his way back from morning prayers at a nearby mosque.

Activists in Lydd are planning to hold a meeting Sunday in light of the growing tensions between the settlers from the “Garin Torani” (a core group of national-religious Jews who often move into poor, mixed Jewish-Arab neighborhoods in order to strengthen its Jewish character) and the Arab residents of the Ramat Eshkol neighborhood in the north of the city. A protest denouncing the attack is also scheduled for Sunday evening. The Arab residents of Lydd have been on high alert ever since the arson attack on a Palestinian home in the West Bank village Duma burned an 18-month-old infant to death on Friday.

According to his police testimony, Abu Sharah was attacked by a group of religious Jewish men, who were armed with sticks, jumped on him and attacked him before fleeing. Neighbors brought Abu Sharah to Assaf HaRofeh Medical Center, where he is currently hospitalized.

According to the police, it is unclear whether the attackers were Jewish, and the matter is currently under investigation.

Update (Aug 3): Police on Sunday announced that they arrested three Arab suspects in the attack. Following the police announcement, local activists held a new situational assessment and decided to delay the rally scheduled to take place Sunday evening. The activists further decided to wait for the initial results of the police investigation. The victim himself, Amad Abu Sharah, is convinced that his attackers were Jewish youths, and not the Arab suspects in custody.