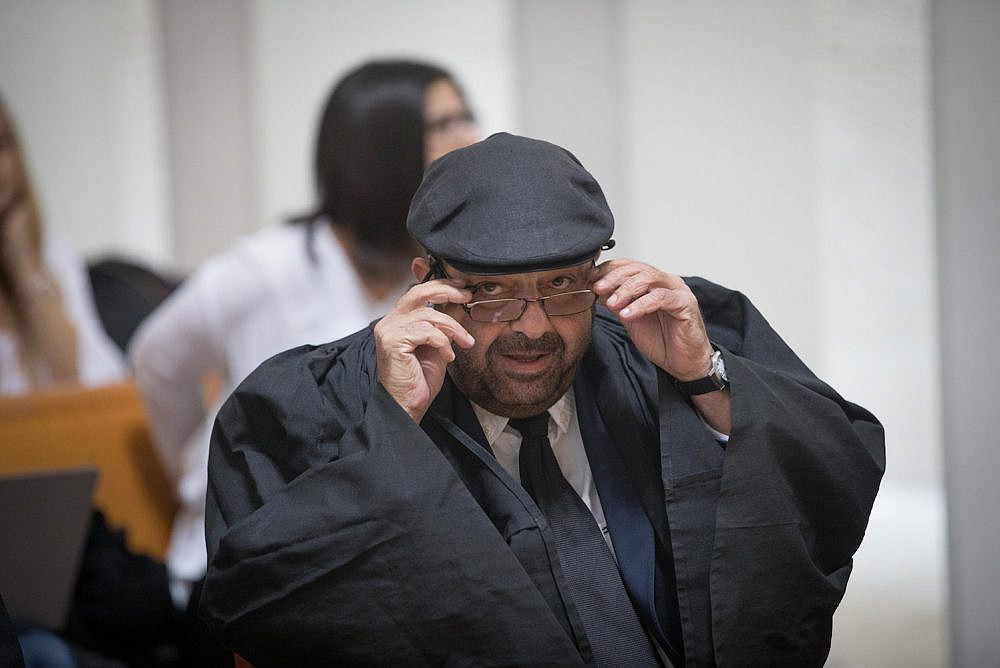 At the height of the coronavirus crisis last month, as Israelis buckled down in their homes and braced for a possible breakdown of the public health system and a major economic fallout, the Israeli government pulled an old trick out of its hat. Instead of passing legislation through the Knesset to regulate the everyday lives of citizens, it circumvented the process and introduced a number of emergency regulations granting authorities far-reaching powers.

The most prominent of these was the Shin Bet’s mass surveillance of Israeli citizens who were infected with or came into contact with someone infected with COVID-19 — considered among the most severe steps taken by any government to stem the spread of the virus.

But those emergency regulations, 37 in all, also enabled steps that received far less coverage yet affected millions, including broadening the authority to make arrests, allowing the firing of pregnant women from their jobs, and cutting teachers’ salaries by 50 percent. In the 20 years prior to the pandemic, the Israeli government has issued only 16 emergency regulations, which have the legal standing of regular laws.

Among those at the forefront of the legal battle against these far-reaching measures is the legal center Adalah. A small, Haifa-based NGO that focuses on issues relating to Palestinian citizens of Israel as well as Palestinians in the occupied territories, Adalah has filed a number of interventions to the Supreme Court against the new regulations.

According to the petition against the Shin Bet’s surveillance, which Adalah filed alongside the Association for Civil Rights in Israel, the government is “using the emergency situation as a fiction, a blank check that permits the government to implement emergency regulations whenever it sees fit. That fiction is creating a clear dictatorship of the executive branch.” 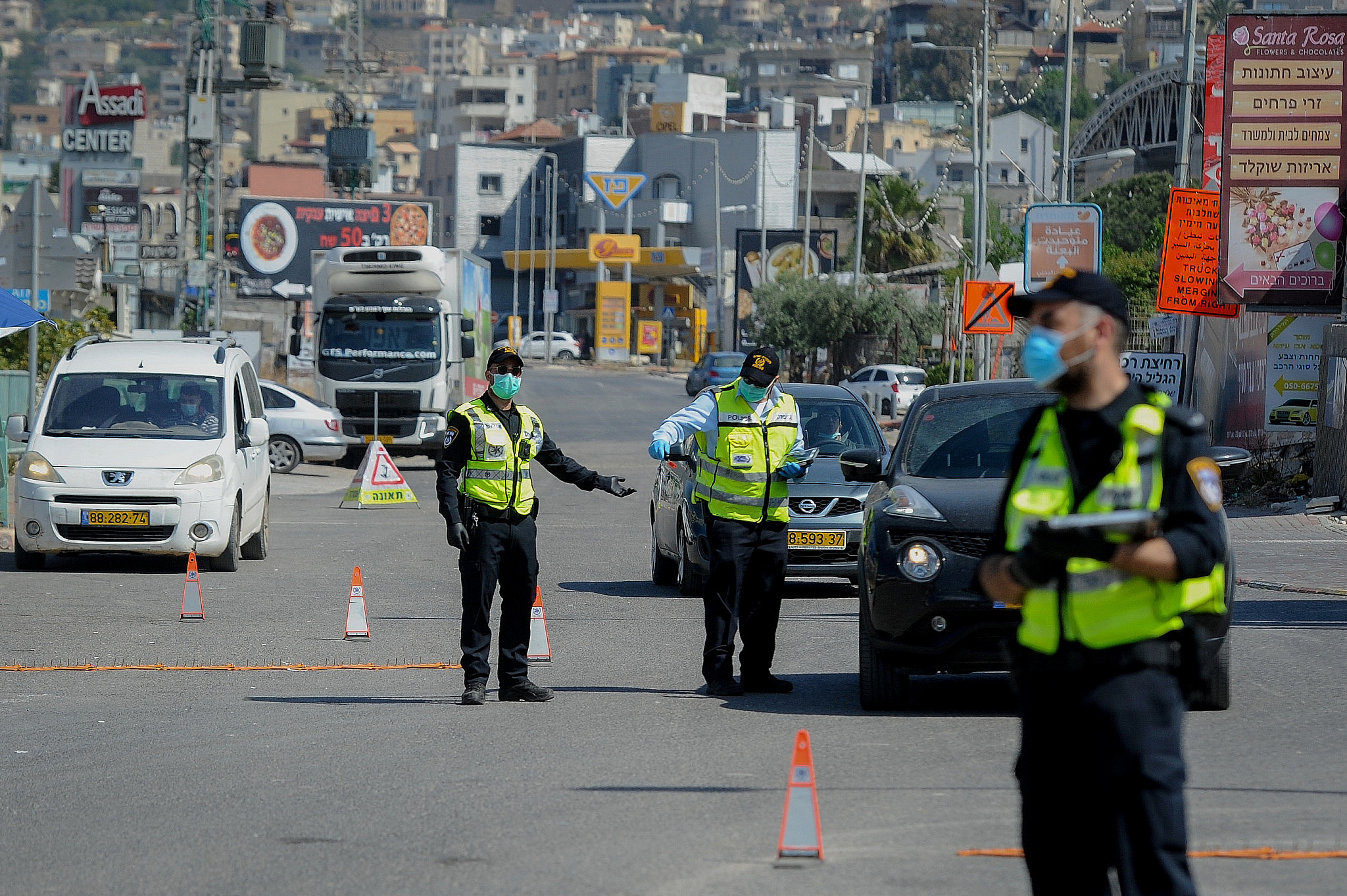 Police at a makeshift checkpoint in the Palestinian town of Deir al-Asad in northern Israel, April 18, 2020, following the government decision on a full lockdown on the town. (Basel Awidat/Flash90)

The petition is the latest example of how Adalah — and by virtue, Palestinian citizens — has helped to lead the fight against draconian measures that not only harm their community, but affect all Israeli citizens.

“If the court does not explain itself vis-à-vis the emergency regulations, it will be a historic precedent,” explains Hassan Jabareen, Adalah’s general director. “We know that those who will be most harmed by a dictatorship are those without representation in the government. Usually that means the Arabs, but under coronavirus, everyone’s rights are violated, so our work suddenly seems more understandable [to the Israeli public].”

The fact that Adalah has filed petitions in recent weeks concerning all citizens in Israel is not a change in direction, insists the organization. Adalah, by its nature as a human rights NGO challenging discrimination, is consistently fighting for equality and social justice for all.

All the while, its work in the Palestinian sector has been tireless. Along with the emergency regulations, Adalah has filed petitions to make both coronavirus testing and distance learning accessible to unrecognized Bedouin villages in the Naqab/Negev. It has also demanded the Health Ministry provide explanations about the virus in Arabic, and demanded that Palestinian prisoners be allowed to meet with family members.

An attack on all women

The current crisis has laid bare the fact that, in the wake of the rise of the Joint List and the dissolution of the “old left,” Palestinian citizens of Israel — who for decades have been suppressed and discriminated against by the state — have become a main guarantor of protecting the rights of all citizens.

“I don’t think there are many political or civil forces left who can play the role of defending democracy and civil rights in a real way,” says Joint List MK Aida Touma-Sliman, who filed the petition with Adalah against the dismissal of pregnant women. 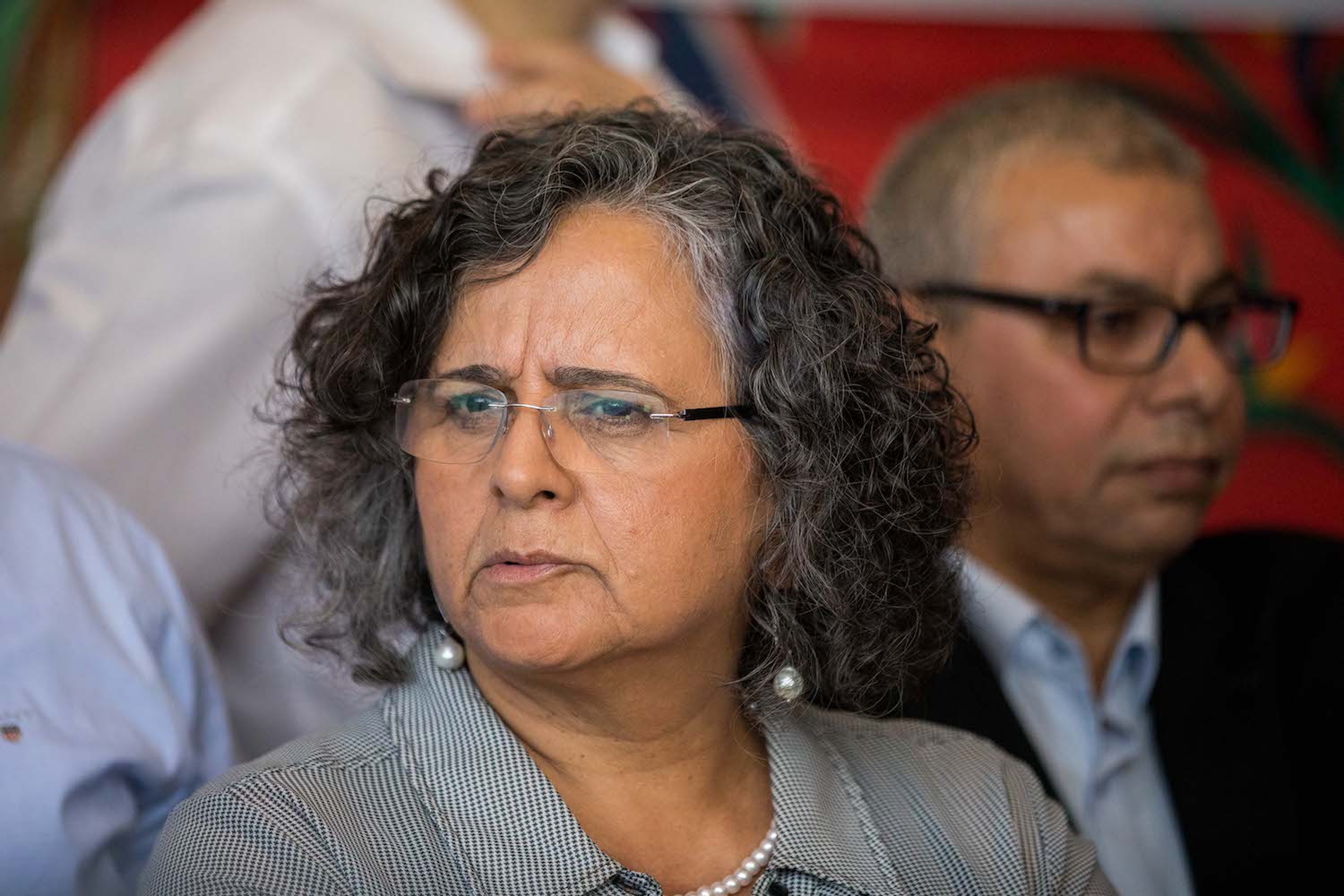 “As a political force, only the Joint List remains. When it comes to civil society, the only organizations left are Adalah, ACRI, and some groups such as Mossawa Center that don’t focus on the Supreme Court.”

Touma-Sliman, who temporarily heads the Knesset’s Labor, Welfare, and Health Committee (at least until Thursday, when the new government is to be sworn in), held an emergency meeting at the end of March on the status of “women with protected status,” such as pregnant women, women on maternity leave, or women undergoing fertility treatment. It was revealed that employers had been taking advantage of the economic emergency regulations to furlough or fire 4,000 of these “protected” women.

Following the hearing, Touma-Sliman asked Welfare Minister Ofir Akunis to put an end to the firings. But the next day, the government issued a new sweeping regulation exempting employers from permission to dismiss women with protected status.

Touma-Sliman says that while she considered the feminist Israel Women’s Network to challenge the regulation, she ended up going with Adalah. “It’s not that I don’t believe in women’s lobby groups,” she said. “But it’s easier with Adalah. I don’t have to argue about every sentence. I believe in their professionalism and their vision.”

While the government decided to cancel the regulation, the High Court hearing on the petition itself has not been canceled. The court has ordered the government to provide the Labor, Welfare, and Health Committee with data on the women who were fired during the 11 days following the regulation’s announcement. 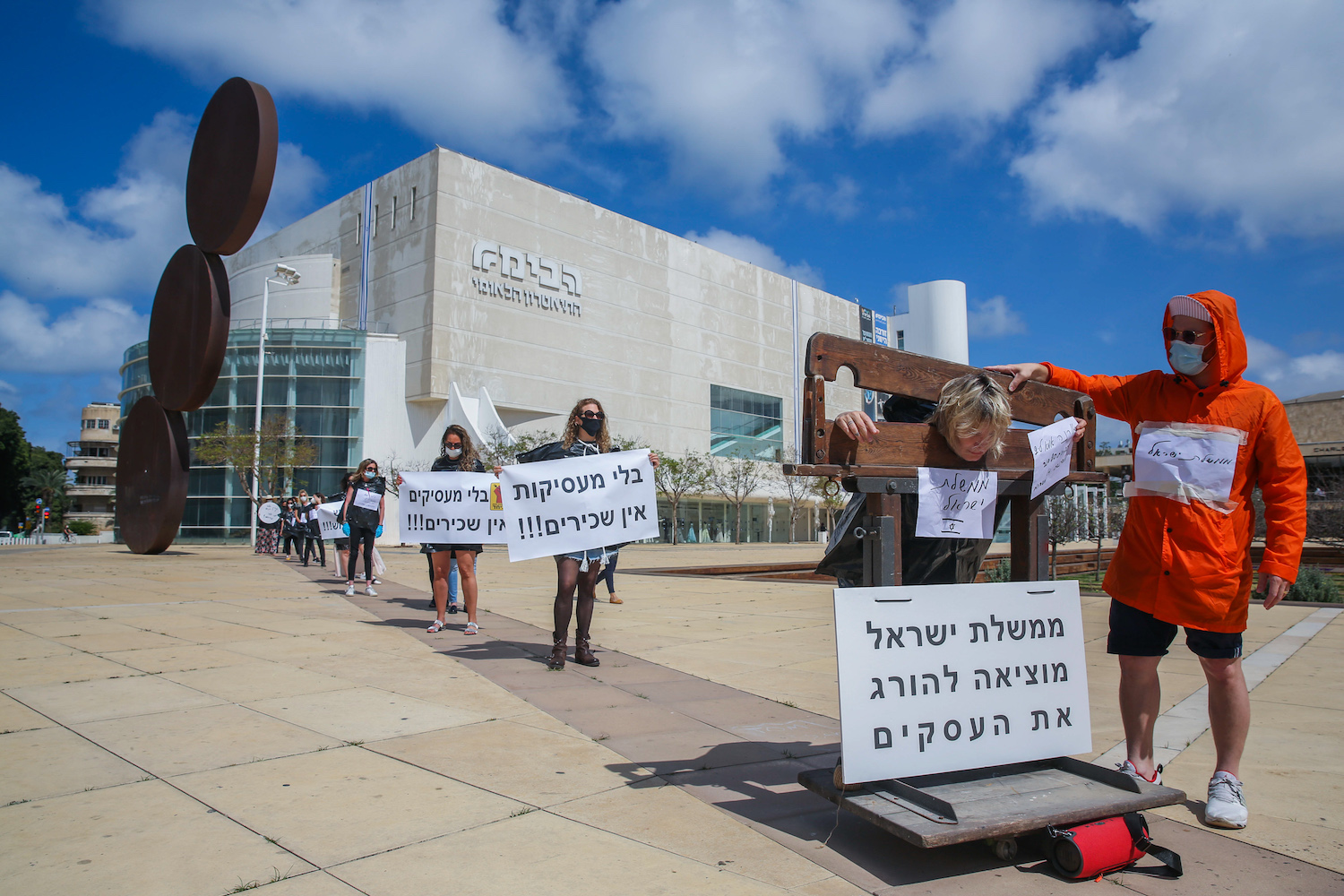 In a separate, successful petition in April, the High Court accepted Adalah and ACRI’s demand to revoke a regulation that allowed for the Shin Bet surveillance of Israelis as a method of COVID-19 prevention. Acknowledging that the regulations were a serious violation of civil rights for both Palestinians and Jews in Israel, Chief Justice Esther Hayut wrote in her ruling that, “The use of tools that have been developed to combat hostile elements against citizens and residents who wish no harm should disturb anyone who believes in democracy.”

Despite the court decision, however, the government is now trying to pass legislation that would allow Shin Bet surveillance to remain.

The last line of defense

Another major case advanced by Adalah in recent weeks, filed together with the Joint List, is the demand to abolish the government’s wholesale use of emergency regulations during the coronavirus crisis.

The state claimed in its response that the new measures were issued in accordance with Israel’s state of emergency, which began with the state’s founding in 1948 and has persisted ever since. According to Adalah, the attempt to apply the emergency regulations — which originally derive from the British colonial mandate, and which are a key component of the military regime in the occupied territories — to the coronavirus is dangerous and would allow the government to bypass parliamentary opposition on almost any issue it wants, and well beyond the pandemic.

During the hearing last Thursday, the justices expressed their dissatisfaction with the continued use of emergency regulations, the latest of which, it turned out, was just issued the night before. The court gave the state 10 days to prepare a framework for passing such emergency laws through the Knesset. 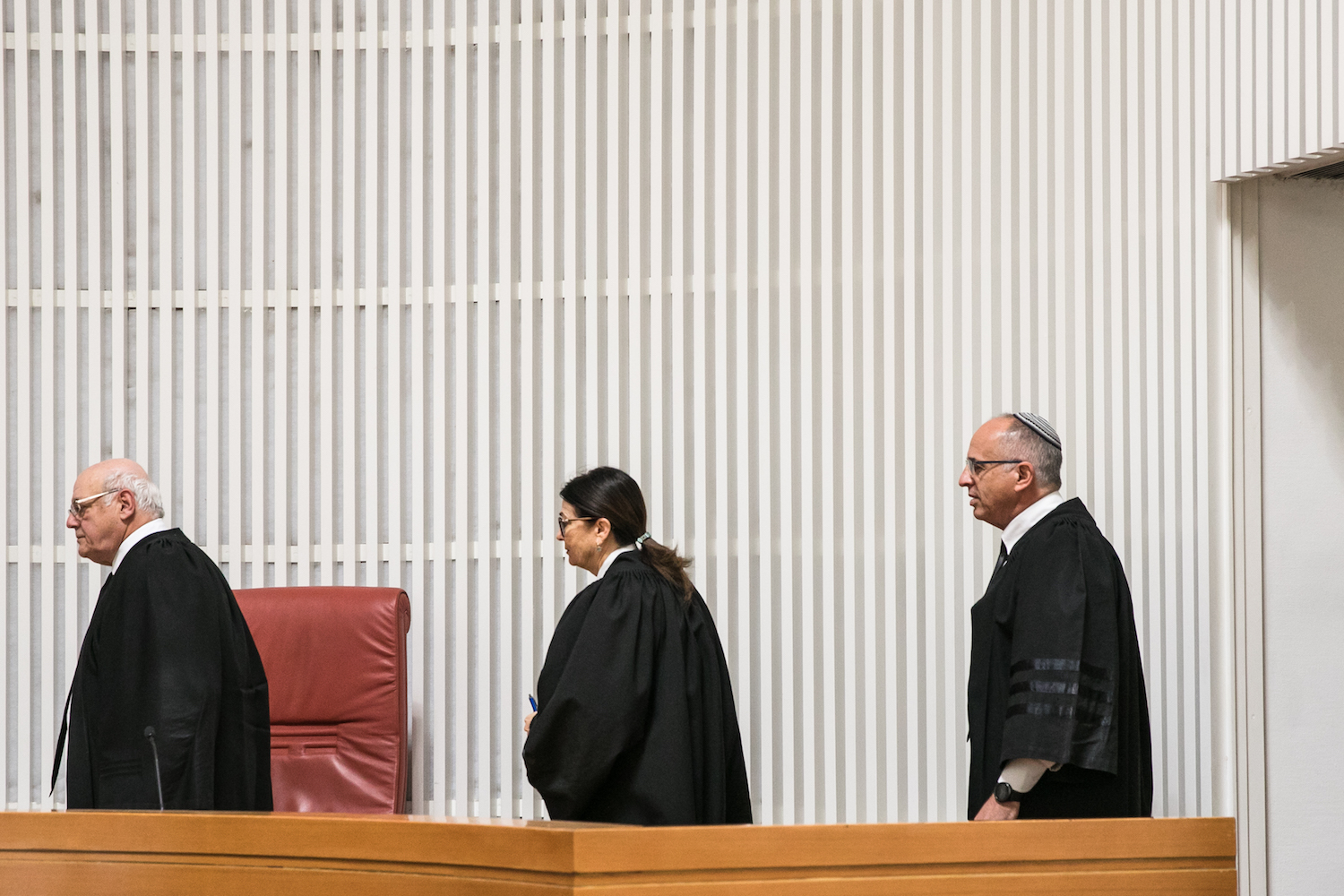 Supreme Court Chief Justice Esther Hayut and other justices arrive at a court hearing on the decision to allow the Shin Bet to track cellphone location data to help combat the coronavirus, March 19, 2019. (Olivier Fitoussi/Flash90)

Notwithstanding this collective approach, Touma-Sliman points out that “The emergency situation has exposed a lot of lacunas that show the ugly face of discrimination.” In her eyes, the last few months have revealed how the government’s economic policies have been running roughshod over Israel’s disadvantaged groups. Most of all, she says, the fallout from the pandemic has revealed that groups like the Joint List and Adalah have effectively become the gatekeepers of “formal democracy” in the country.

Palestinian citizens, Touma-Sliman explained, have always maintained that there is no substantial democracy in Israel; according to Adalah, for example, there are over 60 laws that discriminate against them. But now, she says, the government wants to attack what is left of the “formal democracy that existed, while damaging the sovereignty of the Knesset, the ability of the opposition to have an influence, and the High Court.”

Touma-Sliman emphasizes that she does not long for what existed before. “The current demonstrations talk about how democracy has lost its way. Israel has never been a democracy, and those who come out to defend it need to make that distinction and understand why we have found ourselves in this situation, so that we can build something else.”

Touma-Sliman does not, however, believe that the Jewish center-left views Palestinian representatives and groups as the last line of defense. “Once they (the Jewish center-left) feel that they are strong enough, I have a feeling that many of them will forgo this partnership, as usual. But it also depends on us, how we conduct ourselves in this time.”

For example, Touma-Sliman describes how Joint List head Ayman Odeh was invited at the last minute to one of the recent “black flag” demonstrations organized by Jewish Israelis against Netanyahu’s corruption and attacks on democratic norms. This is not what true partnership looks like, she says. “If you really see us as partners, don’t invite us to speak at your demonstrations so that you can feel good about yourself. Invite us to build the stage from the beginning.”

In any case, she says, the petitions are a sign that the Joint List is “taking responsibility” for the deterioration of democratic rights.

“When you are facing a fascist right-wing offensive, the struggle for formal democracy, which you may have previously criticized, becomes the last refuge,” says Touma-Sliman. “Those who are most discriminated and oppressed are the ones who are defending [democracy] because they know they are going to lose whatever is left. There is something very absurd about a situation in which the persecuted national minority constitutes the most promising political force on the Israeli political map today.”