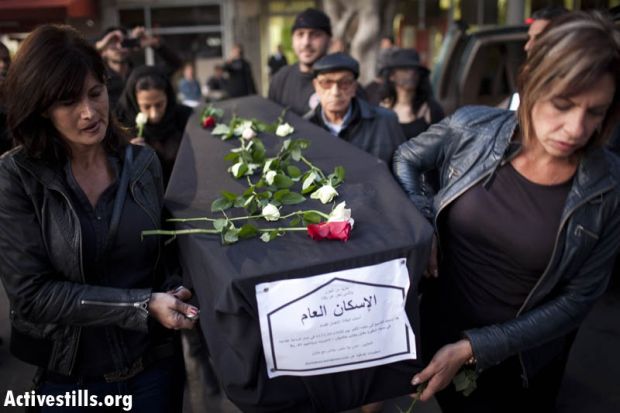 The group of Palestinian and Jewish Israeli protesters held the demonstration in front of Halamish offices in Jaffa. Halamish and Amidar are the two companies that manage public housing in Israel. Currently, more than 800 Palestinian and Jewish families face eviction from their homes in Jaffa and impoverished areas of South Tel Aviv. Many of these people are in dire financial straits and have nowhere to go.

By evicting the residents, the companies pave the way for wealthy developers who stand to make a profit by either renovating old buildings or replacing them with new structures. While both Jaffa and South Tel Aviv are undergoing intense processes of gentrification, in Jaffa, the housing struggle has nationalistic undertones and is fraught with racial tension.

In recent years, land in Jaffa has been turned over to Bemuna, a company that constructs Jewish-only housing for religious nationalist Israelis, often in West Bank settlements. Its first project was in the predominantly Palestinian neighborhood of Ajami. And some of Jaffa’s new Jewish residents are former West Bank settlers who have moved into this “mixed” area with the intent of Judaicizing it.

The struggle of Palestinians and low-income Jewish Israelis creates, at times, an uneasy alliance between the two groups. Many of the Jewish Israelis who face eviction from their homes are Mizrachim – Jews from Arab countries – who typically vote for hardline parties like Likud and Shas. But, when they realize that the state privileges the interests of settlers and capitalists over those of low-income Jews, some understand that they have a common cause with Palestinian citizens of the state.

Although this summer’s protests brought Israel’s housing issues to light, both Palestinian citizens of the state and low income Jewish Israelis have been protesting home evictions for years. In 1982, a Mizrachi resident of South Tel Aviv was shot and killed by Israeli police as he tried to defend his property from Israeli forces.