The Jordan Valley village of Hadidiya is no stranger to human rights violations by Israeli authorities. This is the story of one family whose life and livelihood have been affected by home demolitions, time and time again. 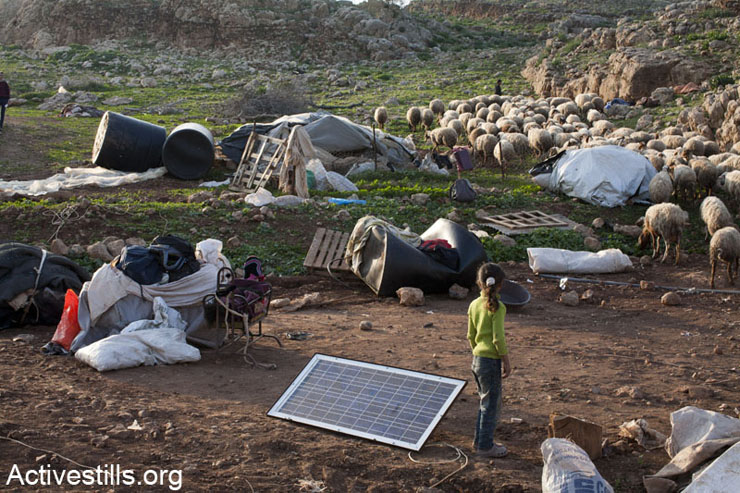 “Watch out! The bulldozers and the jeeps are coming.”

Shirin Salamein heard the warning from one of her neighbors as she finished milking her sheep and goats close to her home. She lives in the village of Hadidiya, behind the Israeli settlement of Ro’i in the West Bank.

“I was about to start making cheese, and there was not enough time to get everything out of the way,” she told us. “The children, the livestock, food: we had no time. The sheep were all scattered over the land. We had to rebuild everything. Thank God, we survived.”

The village of Hadidiya in the northern Jordan Valley and located in Area C (under full Israeli civil and military control), is home to around 150 people. Living in tents and shacks, the local shepherds make a living on the reddish, rocky earth.

Shirin’s family has become used to demolitions. Their homes and the buildings were knocked down by the Israeli army twice in the summer of 2013 – and four times before that.

The young mother invited me to her tent to meet her family. Clotheslines criss-crossed the “room” laden with clean wet laundry. On the floor there was a mattress and under a heavy blanket two small children.

Caring for her children hasn’t been easy, particularly in the summer heat when their home was demolished. According to the Israeli army, the simple shacks, tents and animal pens are illegal because they do not conform to Israeli plans for the area, which is under complete military jurisdiction.

Local Palestinians have no input into the planning decisions for Area C, which benefit Jewish-only settlements. So far in 2014, the Israeli government has issued construction tenders for more than 1,000 new housing units. According to the UN Office for Humanitarian Affairs, 565 structures were demolished there in 2013. More than 800 people lost their homes. One of the most recent demolitions took place on 3 December, three days before we visited.

But despite Israeli efforts to remove her community, Shirin values her way of life. She and other women in the community have an essential role in its economy, which relies on the production of dairy and meat products. These are sold in the market in the city of Nablus, approximately 20 kilometers away.

To make a living, the community needs to use the pasture lands of the hills of Hadidiya. This is why the residents remain in the village, despite human rights violations by the Israeli authorities, including obstacles in access to routine health services.

Shirin’s second child suffers from severe cerebral palsy – he has to be cared for in the summer heat during demolitions as well as during the winter rains. He was born in a hospital in Jerusalem after neighbors managed to get a military ambulance to take Shirin there. But since the birth, she has not been able to get a travel permit for her son to receive the treatment he desperately needs.

“There has been no more treatment for my son since the birth; he’s in the hands of God,” she said.

Shirin also faced the consequences of the travel bans when her third child was born and her family had to negotiate with the Israeli army for an ambulance to be allowed to take her to the hospital in Nablus. The Palestinian ambulance was only allowed to pick her up with an Israeli military escort.

January in Hadidiya is the season when the hills are green and the animals produce more milk. It is also  “demolition season” – every building in the community is at risk.

“Every day, I do the milking at dawn, start making cheese, then prepare breakfast, then wash the clothes and clean the homes. All the time I’m looking out to see if there’s going to be a demolition. The biggest problem here is the demolitions,” she said.

Under international law, the Israeli settlements in the occupied territories are illegal, and demolition of Palestinian property is prohibited unless absolutely necessary for military operations. But in Hadidiya, the Israeli authorities are determined to bulldoze through their homes, and international law.

Nancy Hawker is a Campaigner in the Middle East and North Africa Program at Amnesty International.