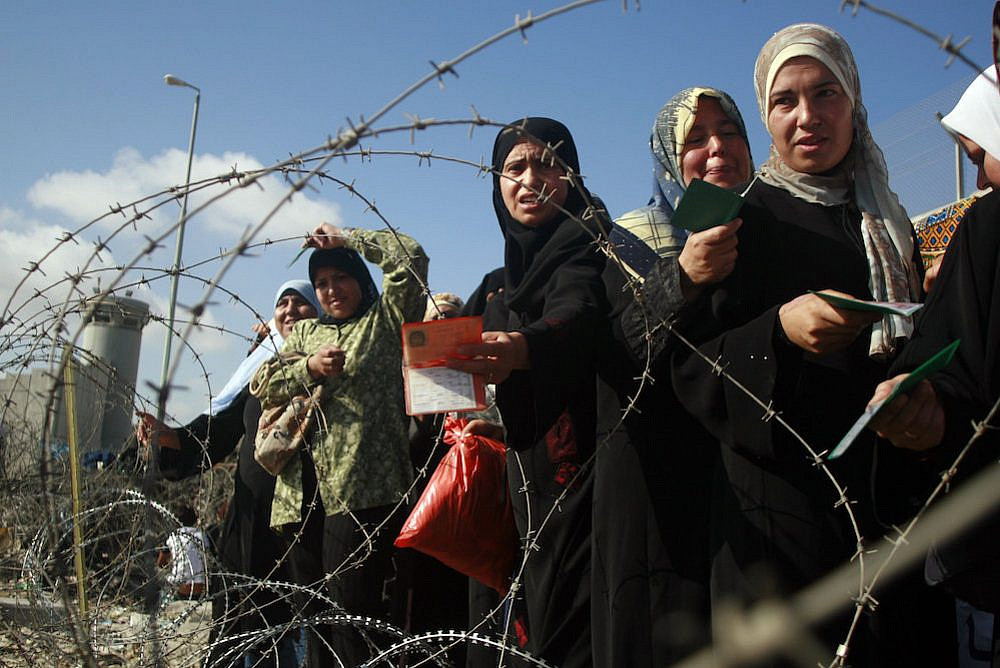 Illustrative photo of Palestinian women standing in line as they try to pass through Qalandiya checkpoint, which separates the West Bank city of Ramallah from Jerusalem. (Issam Rimawi/Flash90)

Staring at the filthy sea on the coast of Gaza City, a young Palestinian man tells me in a whimper, “Gaza is ready for its burial.” This was in September 2019, well before COVID-19 began spreading across the world and arrived at the strip. As haunting as his statement was back then, it is even more so in the shadow of the pandemic today.

Months later, when Palestinians in the West Bank were placed under lockdown because of the disease, a friend phoned me in a panic. “We were already attacked indiscriminately by Israel, now we have to deal with corona[virus]?” she said. “Even if we manage to take all the right measures, what about the ongoing military raids? The soldiers? Gaza?”

When the first cases of COVID-19 sprung up in Palestine, in the city of Bethlehem, Palestinian officials in both Gaza and the West Bank acted quickly to contain the coronavirus. Schools were closed, restaurants were shut down, employees were encouraged to work from home, awareness campaigns were launched, and strict quarantine was imposed in hotspots like Bethlehem and Jericho. Vulnerable and resource-insecure after decades of occupation, Palestinians could not afford to be slow.

So far, these rapid responses seem to have worked. At the time of writing, there are about 480 confirmed cases in the West Bank, including East Jerusalem, and 17 cases in Gaza; far fewer than the 15,400 cases in Israel.

And yet, these early measures still mean very little. A Palestinian municipal employee disinfects a street at the entrance to the West Bank city of Bethlehem, March 12, 2020. (Wisam Hashlamoun/Flash90)

The countless daily sieges Palestinians face at the whims of Israel’s military regime are now colliding with an invisible, rapidly-spreading disease. No matter what we do, our health and safety always hinges on the decisions of a state whose care for Palestinian life is almost non-existent. Even Palestinians with Israeli citizenship, who are discriminated against in all fields of life, come second to Jewish Israeli lives.

Why does this matter when the world at large is at risk during this global crisis? Because Palestine offers a blatant display of how man-made inequalities, in intricate and structural ways, purposely diminish people’s chances at survival. The occupation resembles a torturer stripping a prisoner of all their clothes, with no tools or resources, and throwing them into a hungry lion’s den. The prisoner may survive with wit and luck, but the odds are entirely choreographed against them.

Beyond the immediate and direct attacks inflicted by the occupation — from arrests, to home demolitions, to sniper bullets, and more — Israel’s policies have deliberately carved a weakened and divided Palestinian community, leaving it unable to fend for itself in times of need. Even when there is “cooperation” between the Israeli and Palestinian health sectors, the occupation’s impact on our social, economic, and political fabric has assured our collective fragility in confronting the pandemic.

For example, under the 1994 Paris Protocol — an Oslo-era agreement signed by Palestinian leaders under the false pretext of gaining an independent state — all imports and exports related to the occupied territories fall under Israeli regulations. Trucks loaded with goods enter the Gaza Strip from the Kerem Shalom crossing, the only crossing between the Gaza Strip and Israel entering aid and goods, in Rafah in the southern Gaza Strip, on May 12, 2019. (Abed Rahim Khatib/Flash90)

This means that health needs, like pharmaceutical expenditures and medical supplies, are heavily restricted by Israel under the guise of security. The Palestinian Health Ministry is thus forced to overpay for medicines because of the Israeli regulations, with no guarantee they will receive them in a timely manner. In 2018, for example, Israel delayed the delivery of vaccines to the PA after it decided to enforce legislation that had previously been waived.

The high unemployment rates and lack of work opportunities, caused by the dependency on the Israeli economy which already plunders Palestinian resources and infrastructure, also means that Palestinian families are unable to afford the medical care or nutrition that can help them against diseases like COVID-19. Palestinians are thus trapped in a de-developed health sector, dependent on an occupier that is simultaneously crippling their ability to care for themselves.

The obstacles in the West Bank do not stop there: restricted movement due to checkpoints; lack of sanitation systems due to constrained town planning; lack of shelter due to home demolitions and evictions; arrests and detention through night raids; refugees living in overcrowded spaces; soldiers throwing toxic materials like tear gas and “skunk water”; and countless other injuries that have harmed our physical well-being, make us all the more compromised against COVID-19.

These conditions are even worse in Gaza, which was already on the brink of being uninhabitable. For the strip’s two million people, there is no escape or ability to practice “social distance.” In an open-air prison, choked by a 13-year siege and devastated by repeated military assaults, people are rendered helpless not just in the face of a pandemic but in daily survival. 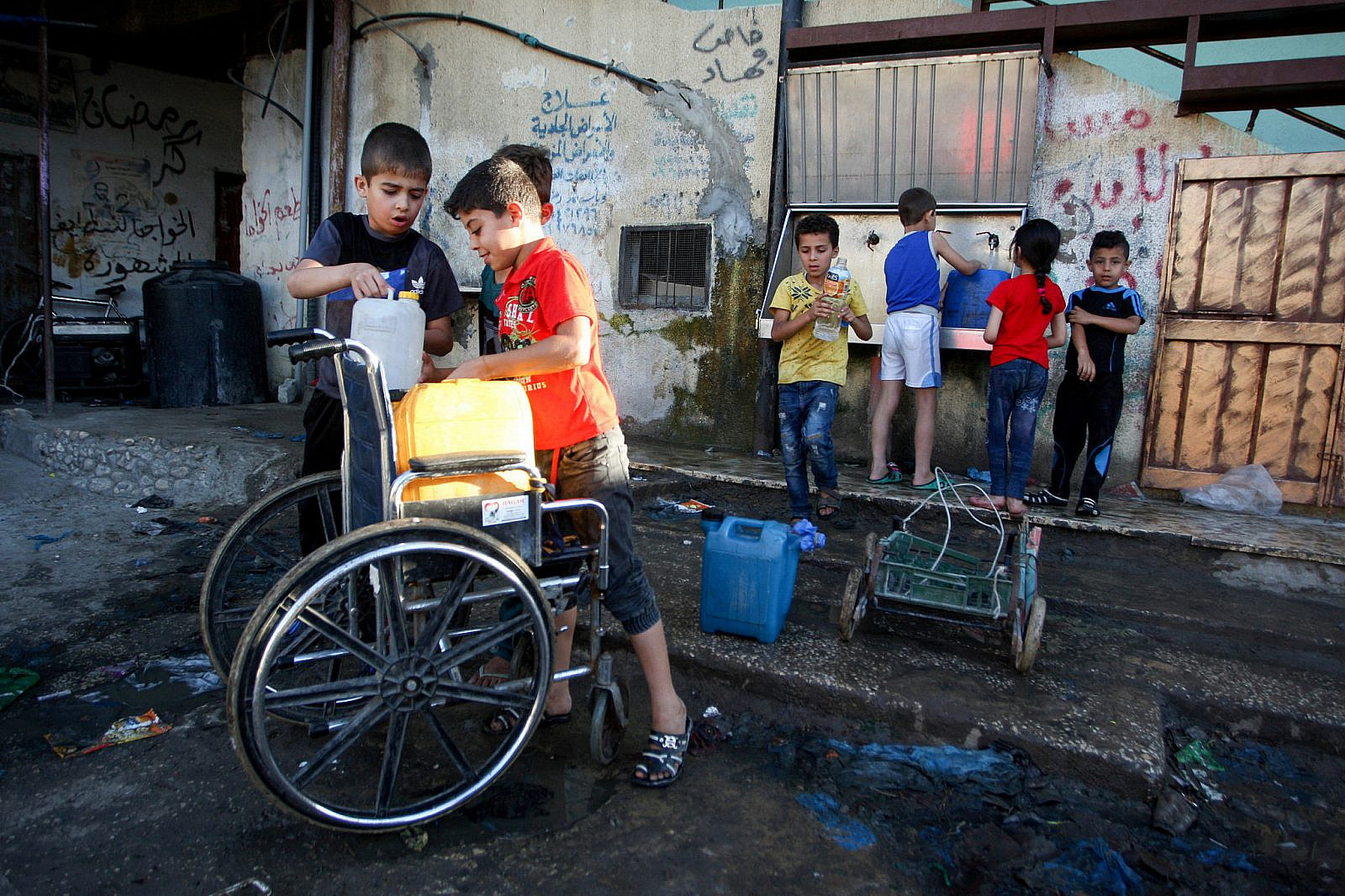 All this means that we Palestinians are not just unsupported, but are unable to support each other. Even if Palestinians manage to contain the spread and make efficient use of what little resources we have, we remain at the occupation’s mercy. This is without even mentioning the economic blow, the heightened poverty and food insecurity, and other damaging effects that will be felt for years to come.

And while there is a severe shortcoming from the Palestinian political leadership, it does not compare to their Israeli overlords. Israel, as a de facto occupying power, is obliged to provide services to the occupied population under international law; in other words, the prison warden is responsible for the welfare of the prisoner. With that duty comes the prohibition of any measures that would permanently compromise the rights of the local population, including their right to health.

Palestinians have protested against these oppressive measures for decades; but even when our shouts did not fall on deaf ears, international intervention did not take our demands seriously.

The importance of having control over our fate — or in simpler terms, to have our freedom — is so we can have a fighting chance. Freedom on its own is not enough to overcome the pandemic, but at least it would give us the power to try without being consistently beaten down, and without suffering the consequences of choices that are not of our making. This is the meaning of oppression: violently and forcefully designing a reality whose brutal outcomes fall on the oppressed.

If decades of occupation, mass imprisonment, killings, land theft, and resource theft are not enough, perhaps the tragic flames of a pandemic will more vividly expose the injustices that are tailored to impair and immobilize Palestinians. Just as we take measures to confront COVID-19, we must also confront the forces that strip us bare and throw us into the lion’s den.

Mariam Barghouti is a Palestinian writer based in Ramallah. Twitter: @MariamBarghouti.