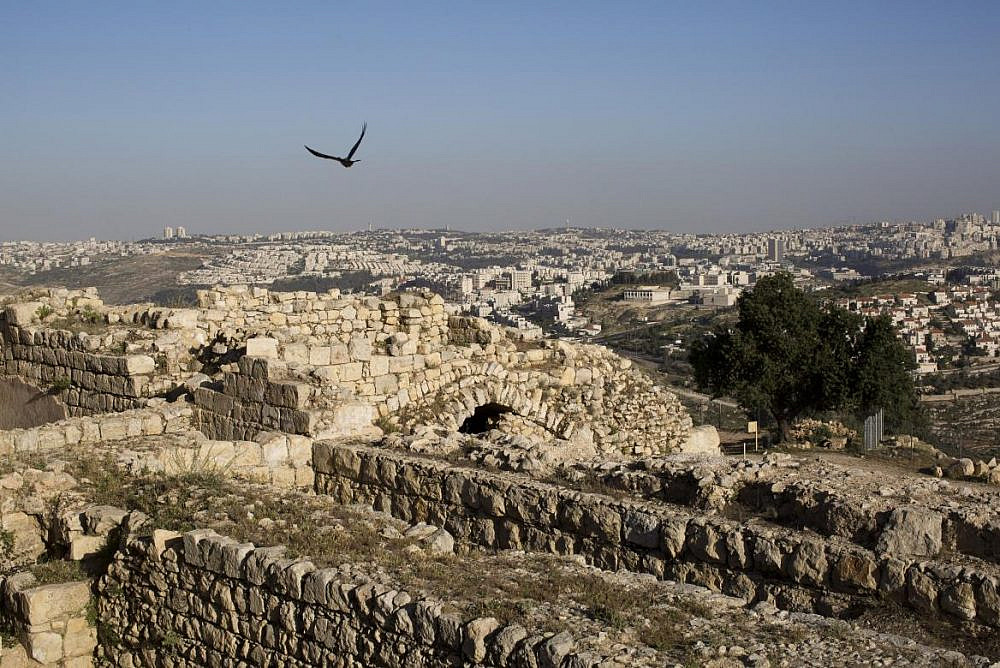 The Palestinian village of Nabi Samuil, also known as Nebi Samuel or Samuel's tomb, April 28, 2014. The mosque has been cordoned off and the section containing Samuel's tomb has been converted into a synagogue. (Keren Manor/Activestills)

Israel’s takeover of the mountain ranges and hills throughout the occupied West Bank has not spared sacred places of worship for Palestinian Muslims. According to a new report by Israeli anti-occupation group Machsom Watch, maqams — tombs or shrines built on a site associated with a Muslim saint or religious figure — across the West Bank have been informally annexed to Israeli settlements through military orders, the expansion of IDF open-fire zones, and entrapment in nature reserves and antiquity sites.

These houses of worship served as religious, cultural, and community centers in the rural areas of Palestine long before villages had their own mosques. Palestinians would make pilgrimages to maqams and the sacred woods that surrounded them on holidays, and during family celebrations and weddings.

This communal aspect can be seen in places to which Palestinians still have access, such as the sanctuary of Sheikh al-Qatrawani in the village of Atara and the Nabi Saleh Maqam, located in the village of the same name. In recent years, Palestinians have built well-kept and vibrant public gardens around these sanctuaries for the benefit of their communities.

Since the occupation of the West Bank began in 1967, Israel has, according to Machsom Watch, made a clear distinction between holy sites that honor Jewish biblical figures — which receive official recognition by the Israeli authorities and are maintained on a regular basis — and maqams that are holy to Muslims alone.

Muslim holy sites are generally not recognized by Israel and those rendered inaccessible have been abandoned by the state, jeopardizing their continued existence. Preventing Palestinians from visiting these maqams is a violation of international law, which grants occupied populations the right to worship at their holy sites.

Machsom Watch’s study found 40 such sites. The following are three examples of maqams that are trapped inside settlements and nature reserves.

Sit Zahra Maqam, built 400 years ago, is located in the Kochav HaShachar Nature Preserve, just northeast of Ramallah. Established to honor Sit Zahra, the patron saint of motherhood, the maqam has a classic square structure, thick walls, and a dome. Pilgrims from the town of Deir Jarir used to regularly worship at the maqam. 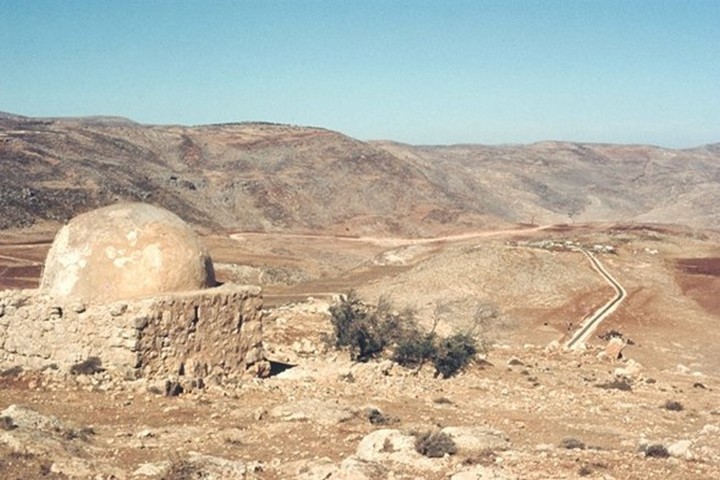 In its vicinity now stands the Rehavam Ze’evi Lookout — named for an extreme-right Israeli politician who promoted the wholesale expulsion of Palestinians from the country and was assassinated by Palestinian militants during the Second Intifada — which overlooks the settlement of Kochav HaShachar and the outpost of Mitzpe Kramim.

The maqam used to be located on the mountain right across from the Kochav HaShachar settlement, which would later expand and form the Mitzpe Kramim outpost — which the High Court ordered evacuated the week before last — on land belonging to Deir Jarir. Today, the maqam is almost completely destroyed. According to a member of the Deir Jarir town council, the shrine was destroyed by either army or settler bulldozers.

Not far from the ruined maqam, settlers built a large, round stone stage and lookout in honor of Ze’evi. The Kochav HaShachar Reserve, which spreads out of 3,500 acres, is off limits to Palestinians, as the only entrance to it is through Kochav HaShachar or Mitzpe Kramim.

In the heart of Yitzhar, one of the most radical settlements in the northern West Bank, lies a mosque and maqam in honor of Salman Al-Parsi, named for the close friend and personal barber of the Prophet Muhammad. The maqam is surrounded by a grove of ancient oak trees and now stands cracked and dilapidated, begging for restoration and care. Palestinians are forbidden from worshipping at the site.

The site mentions neither Salman al-Farsi nor his Muslim faith. Nor does it mention the six Palestinian villages at the foot of the mountain: Burin, Madma, Asira al-Qabiliya, Urif, Einbus and Huwara. These names are known today mainly due to brutal attacks by the settlers of Yitzhar and its outposts — often accompanied by Israeli soldiers — on these villages’ residents, vineyards, and the local school in Burin. 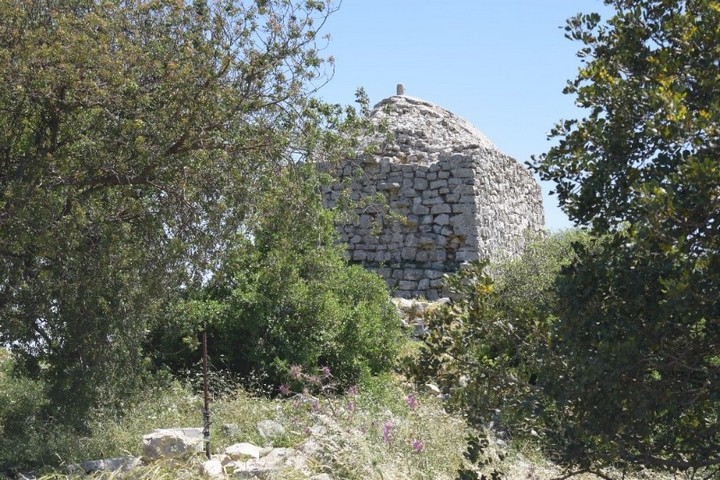 Samir Musa, an Arabic teacher from Burin who owns land on the mountain, says in the Machsom Watch report that the land upon which the maqam stands was expropriated by military order in 1983, and the landowners were not given an opportunity to appeal or object. The Palestinian residents of the area were told that they had 40 days to appeal, but only received word of the expropriation 35 days after the fact, leaving them only five days left to file the appeal.

“We were surprised to find that two years later, the place had turned from a military installment into a civilian settlement inhabited by extremist settlers,” says Musa. “I hope I can visit the mosque just once before I die, to see it and remember the places I would pray and sit, and the places I would study.” Musa studied for matriculation in the Salman al-Farsi Mosque, under the shade of the ancient and sacred oak trees.

The settlement of Elon Moreh in 1983 became the proud owner of 6,400 acres of Palestinian agricultural land, which would become the Mount Kabir Reserve, without so much as lifting a finger. The entrance to the reserve is only through the settlement gate, and Elon Moreh’s farmers are free to plow and plant on the Palestinian land there.

On the eastern ridge of Mount Kabir stands the Sheikh Bilal ibn Rabah Maqam, named after Islam’s first muezzin and a close friend of the Prophet Muhammad. The maqam previously welcomed pilgrims from the villages of Deir al-Hatab, Salem, Azmut, Rujib, and Awarta, as well as from the city of Nablus, which lies at the foot of the mountain.

The maqam has a unique structure, with a pointed dome upon which leans an ancient oak tree. Today, under the management of the Nature and Parks Authority, the building lies desolate, covered in cracks and dirt. There is no sign indicating the building’s religious significance.

On the other hand, under the shade of a large, well-kept oak tree facing the Tirza River and the Jordan Valley, settlers built the Mitzpe Luntz memorial site in the 1980s in honor of Yosef Luntz, formerly commander of the Ramallah and Nablus districts, one of the military governors of the Gaza Strip, and the head of the Civil Administration, Israel’s military government in the occupied territories.

These three examples show how Israel’s land takeovers are carried out through the destruction of Palestinian heritage and religious sites. These takeovers prevent Palestinians from accessing these sites, all while Judaizing the area through the establishment of memorial sites for Jews who supported and took an active role in the occupation. 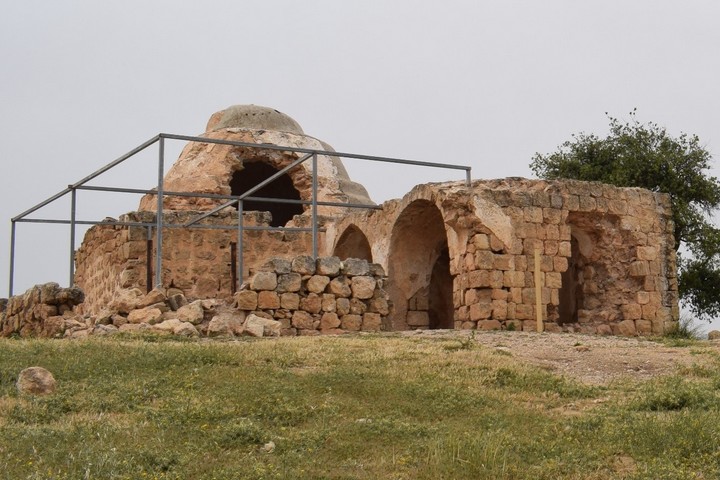 There are other ways that Israel shows the occupied population that its heritage is unworthy. The Ahmad al-Katsav Maqam, for example, belonged to the village of Marda. Today, over 55 percent of Marda’s land has been built over by the settlement of Ariel. The maqam was demolished for the purpose of erecting another security fence for the settlement, and no trace of it remains. The destruction was not accompanied by an act of recognition or an apology, and the maqam is still marked on official Israeli maps.

And what about sites holy to both Jews and Muslims, such as Nabi Samuil (Tomb of Samuel the Prophet), Al-Haram al-Ibrahimi (Cave of the Patriarchs), Bilal ibn Rabah Mosque (Rachel’s Tomb) and Nabi Yusuf (Tomb of Joseph)?

The occupation regime has not been able to keep Muslims away from Palestine’s well-known mosques, but only a few Palestinians manage to actually pray in Nabi Samuil, just north of Jerusalem, because of the many checkpoints on the way. Mass pilgrimages of Jews, on the other hand, take place at the tomb without interruption. The same goes for the Cave of the Patriarchs/Ibrahimi Mosque in Hebron.

Israel has also managed to completely block Palestinian access to Rachel’s Tomb/Bilal ibn Rabah Mosque in Bethlehem and Joseph’s Tomb/Nabi Yusuf in Nablus, turning them into sites for Jewish pilgrimage only.

Joseph’s Tomb is located just outside Balata refugee camp. A Muslim prayer niche, known as a mihrab, is hidden in its southern wall. An entire chapter in the Qur’an is dedicated to Joseph. Muhammad had great respect for him and saw many similarities between their life stories.

Today, the tomb is open to Jewish pilgrimage only, and a number of Israeli ministers and members of Knesset have visited the site. Palestinian cars are allowed to use the main road leading up to the tomb but are not allowed to stop near the compound. Mass pilgrimages of Jews take place at night and are a point of friction between Palestinians and Israeli security forces — not only inside the tomb itself, but also along the road. Israeli forces are stationed for miles on both sides of the road, which winds through several neighborhoods in the city. Many Palestinians have been wounded and even killed in protests against the closure of the tomb to Muslim worshipers.