LISTEN: Israeli human rights lawyer Michael Sfard speak to Raji Sourani, founder and director of the Palestinian Center for Human Rights, about the ongoing destruction in Shujaiyeh, the use of human shields and the fate of Gaza’s civilian population.

By Michael Sfard and Raji Sourani

Michael Sfard: Raji? This is Michael. Can you speak now?

R: Well last night was difficult, the worst in the last two weeks. This is incredible evil. Ambulances weren’t able to reach the areas which were under heavy bombardment by tanks and F16s. And F22s were used too last night. And these kinds of bombs that we are not familiar making the houses last in an earthquake. You know, it just shakes for a few seconds.

M: There are no warnings before?

R: No no no. It just on the top of the people, on their heads. It is a war zone, not bombing. You see slain [people]. Six to eight bombed per minute. Not for 10 minutes, or one hour, all the east side of Gaza, Zeiton, Shujaiyeh, eastern Jabaliya, nothern area, eastern Khan Younis, eastern Rafah…

M: Israeli friends reported that the IDF, the Israeli army made notifications that the civilians could go to some areas. Are there any areas that are safe to be?

R: No, there is not safe place in Gaza. You can be in the street, in my office or home and you will be bombed and away from my house, sixty meters a house was bombed by an F16. This can anywhere, whether it a drone, F16, and tonight they used F22. Gaza, Michael, I’m telling you, 350 square kilometers, two million people are living in it. It is one of the most densely populated areas on earth. Anywhere you move. You can ask people from the northern or eastern areas to move but you are taking about 400,000. They ask eastern Khan Younis, where to go? 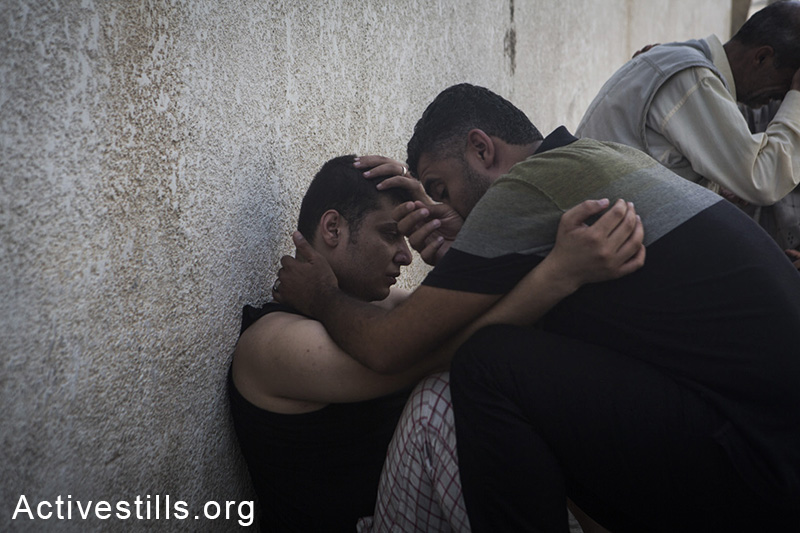 M: Do you think it is worse than Cast Lead?

R: That was a joke. This is very, very serious. I think the army is losing their minds. They really want to inflict pain and terror on the civilians. I have no objection to do that with Fatah, with Hamas, with PFLP, they are competent, they are resistance. But I’m telling about hitting the flash, they are bombarding randomly. Bombing the civilians houses. Many, That is why many families fled. I challenge if in Gaza, one million people, if any of them slept.

M: Raji, what are the PCRH figures of civilians killed since the beginning?

R: Only yesterday we had something between 70 to 80 killings. And injuries you have much, much more.

M: And since the beginning?

M: Now you told me before that there is a suspicion for the use of DIMES?

R: Yes, that is what the doctors are telling us, including international doctors. They see we don’t see clean wounds, they see sharp ones; it is a very strange kind. There are hemorrhages, amputations.  You hear the rockets and then it is over, you are hurt. It is like X-Files.

M: And there is no shrapnel?

R: No. Tonight and the night before, they are using tanks heavily, and using heavy artillery. On the civilians areas. Of course the tanks don’t use DIMES – these are tank bombs.

M: Are the Hamas forces visible around the streets of Gaza?

R: No. You can’t figure out one of them. You don’t see them, they are ghosts. They don’t function from the civilian areas. They don’t move anything. Everything was planned in advance.

M: But what do you mean they don’t function from civilian areas? They do shoot.

R: You don’t see any of them them.

M: But some of the rockets are shot from civilian areas. This is something that is quite clear, no?

R: Of course. All of Gaza is a civilian area. By definition. Where these rockets are coming from? Of course. But “using civilians as shields” is nonsense and disgusting. And it doesn’t exist. The plains they (Israel) are using [for targeting Hamas), but you don’t hear any second explosion, Michael. You don’t hear. They would say we bombed the south because it is a storage area, but if they would bomb [a storage area] it will destroy 20-30 houses around them, but this is not the case.

M: Raji, how many PCHR people do you have on the ground now?

M: I mean, are field workers still going out? 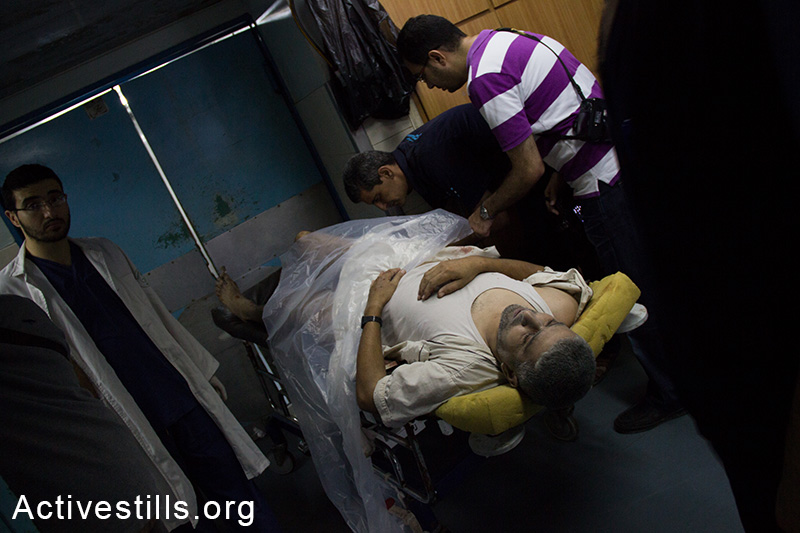 R: Yes, we had our own field workers, and we depend only on our accounts. We don’t take any over accounts, including hospitals. We may take these numbers to compare. We have field workers from Rafah to Beit Hanoun, and in between, and we have our lawyers, for this documents, also. We have an aim to represent most of the families who has been raided, including the family who lost their children on the beach.

M: Now I understand that as this time there no indications of use of white phosphate right?

R: No. We haven’t noticed that at all.

R: Last night people were pleading for them to go and take the injured. And they couldn’t do anything for them. People died bleeding, literally, especially in Sajahiya, and Zeiton, and Turkman area

M: I will be in touch, and what can say, I hope this ends soon.

R: We will remember this in a good way. This is tough, it’s  unprecedented, it never ever came up to this. Keep well.

Related:
PHOTOS: Scenes of devastation from deadliest day in Gaza
WATCH: Dozens of bodies strewn in the streets of Gaza
How can you possibly oppose this war?
Gaza war diary: ‘A second of silence, then the bombs go off’