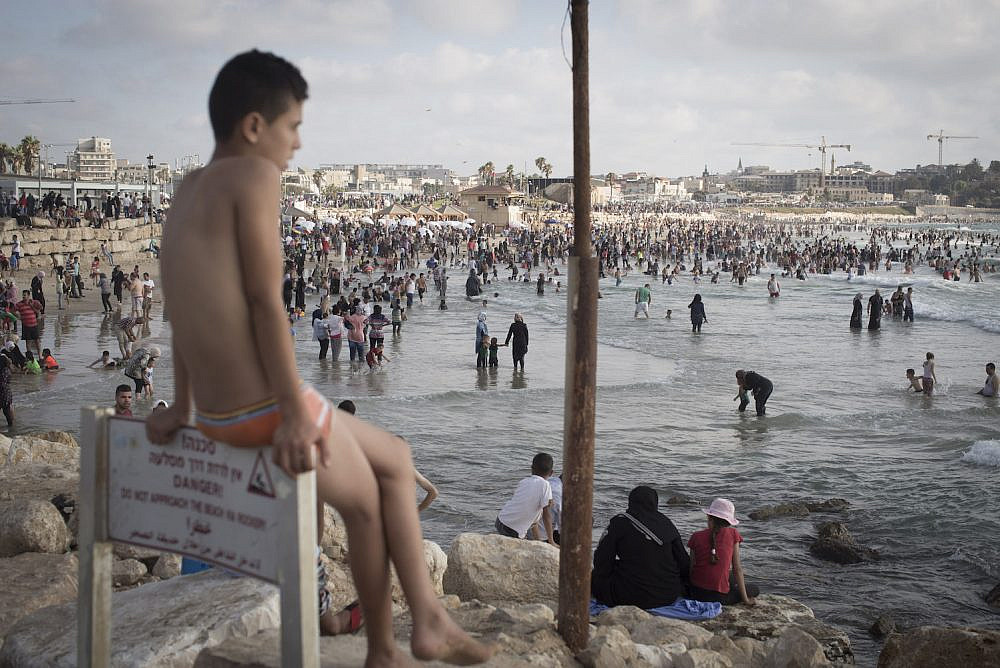 Palestinians bathe in the Mediterranean Sea during the last day of the Eid al-Fitr holiday as the sun sets in Jaffa, July 19, 2015. (Oren Ziv)

My son, Mahmoud, celebrated his 18th birthday a week ago. Alongside the joy, the day brought back memories of the countless moments he experienced throughout those years as a Palestinian child growing up in Jaffa, a citizen of this state.

Already from the age of three or four, Mahmoud understood this state differentiates between people — a hierarchy determined according to skin color, religion, and nationality. Mahmoud understood that Jewish children are deemed more important. He understood this because there was no playground near our house, and even when one was built later it was pitiful, despite the fact that there were many small children in the neighborhood. If Mahmoud wanted to play in any sort of park, we were forced to drive north to an area where there were white children. In those areas, Mahmoud had more than two old swings, and he did not have to pull down his shirtsleeves to hold onto the swing’s handle because here it was smooth, unlike the one near our house which was rusty and sharp.

At the age of 12, Mahmoud understood that the resources provided to the Arab education system were less than those of the Jewish system. He understood this when he saw the difference in quality between the Arabic and Hebrew schools here in Jaffa, which forced us to transfer him to a Hebrew school. There, unfortunately, he lost his Arabic and was forced to take tests during the holy month of Ramadan. The staff in the school are wonderful and tried their best to enable Mahmoud to succeed and feel comfortable, but some things are beyond their control.

Around the age of 13, Mahmoud realized that his language was a particularly problematic matter. When he needed a psycho-didactic diagnosis, the clinic suggested that we travel to the Triangle area in central Israel-Palestine to meet with someone who would speak to him in his mother tongue for a subsidized price. But at the same time, the clinic offered another boy in Mahmoud’s class, who lives nearby, to meet with a diagnoser close to home who speaks Hebrew — also for the subsidized price. Thus, in order to get a diagnosis in Arabic and close to our home, I had to pay full price. Only after a long wait and a battle did the clinic agree to reimburse me.

Shortly before the age of 14, Mahmoud understood that not only was he less important than a Jewish child, he is a suspect by definition, exposed to police bullying and violence. 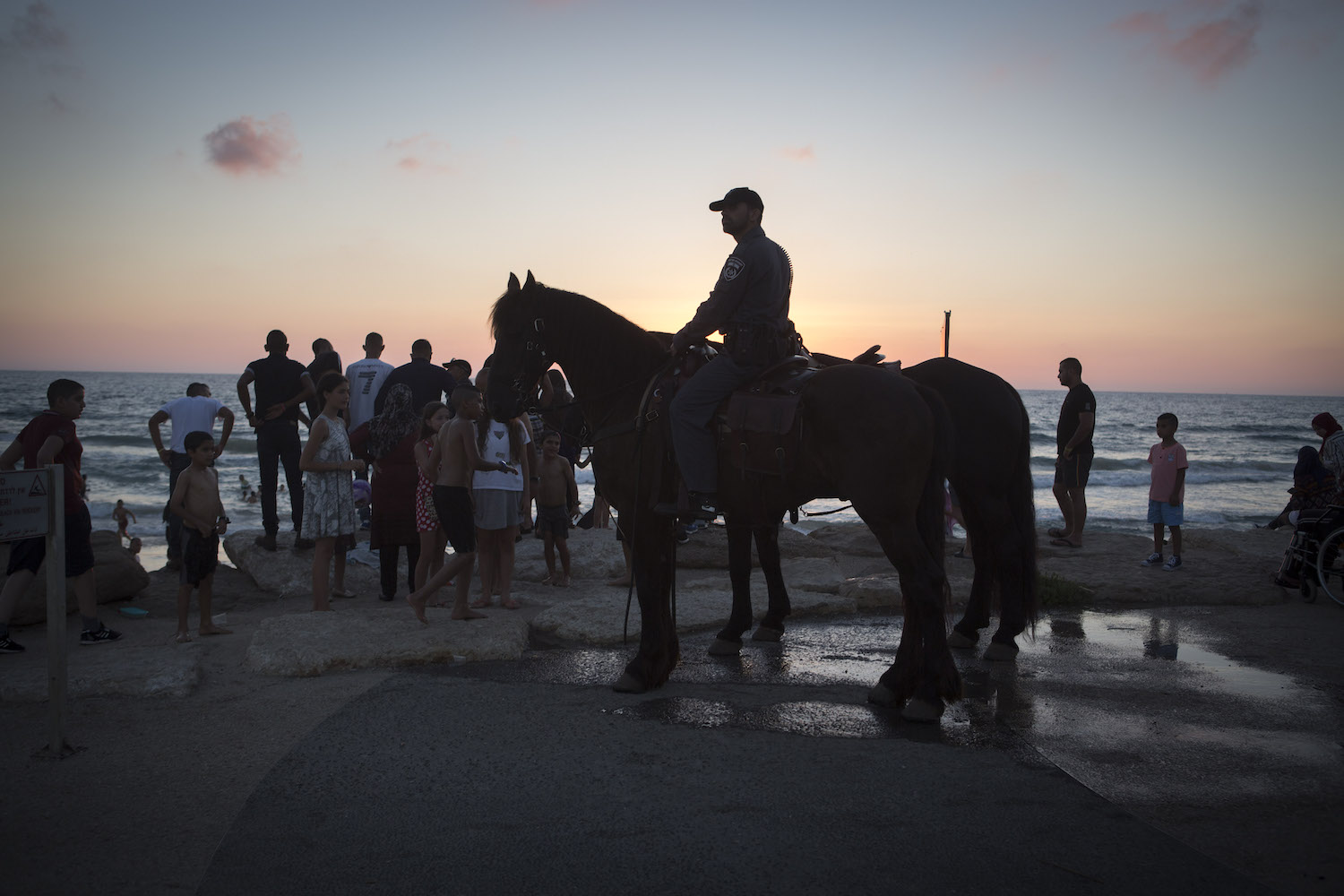 A mounted Israeli policeman looks on as Palestinians enjoy an evening on the beach on the border of Tel Aviv and Jaffa during the second day of Eid al-Fitr, July 7, 2016. (Oren Ziv)

On the eve of Rosh Hashanah, Mahmoud was hanging out with a friend on the Jaffa promenade. Riot police stopped him and asked him to identify himself. But why do it like human beings when it can be done with threats and bullying? Mahmoud understood that the police who were meant to protect him were the same police that attacked and threatened him. Naively, I complained to the Police Internal Investigations Department. If I once had any hope in fair treatment, it faded when that case was closed. This is how my son understood that the so-called justice system is light years away from real justice.

At the age of 17, Mahmoud understood that he had no basic right to personal security, and that bullets fly left and right in his neighborhood, with no one to stop it. After 10 murders in Jaffa in the past two years, only one of which has been solved, Mahmoud was fortunate enough not to be present at a completely routine shooting incident near a friend’s house in Jaffa. Photos of the bullet-pierced vehicle made it totally clear: Mahmoud has no personal security.

At the age of 17-and-a-half, when Mahmoud finished studying citizenship and democracy, he understood that in practice, these concepts have nothing to do with the reality of his life. He understood that he does not really have the right to protest or demonstrate, and that if he did, he would be considered a “rioting Arab.” 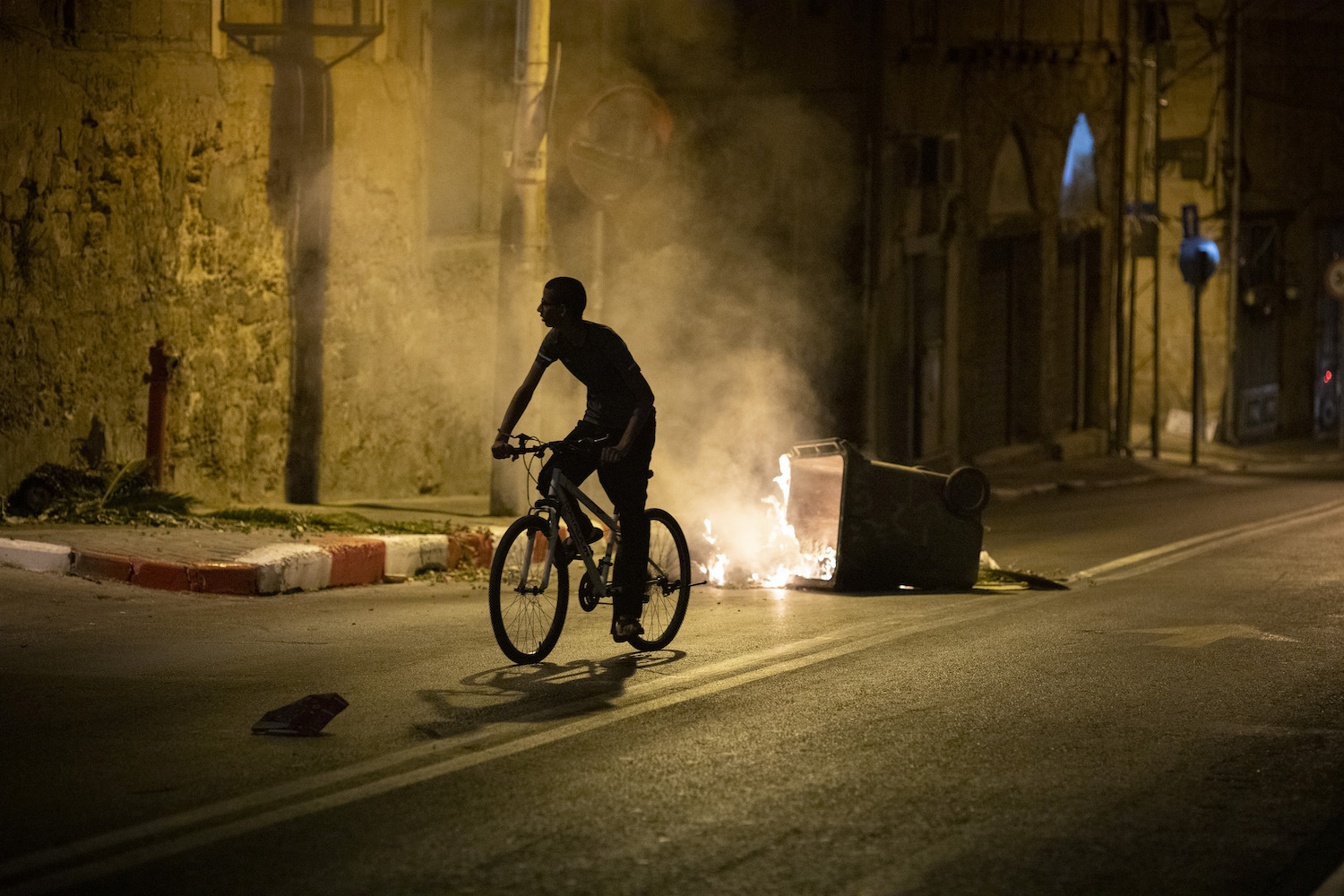 A young Palestinian rides his bike in Jaffa as Israeli police disperse Palestinians protesting against the Tel Aviv municipality’s plan to build a homeless shelter and commercial space over an 18th-century Muslim cemetery, July 18, 2020. (Oren Ziv)

The events of May 2021 illustrated this nicely: I reached a point where I had to deprive my son of his freedom of movement and stop him from participating in the protests because I was worried about him. Because I was afraid that he would get hurt, like the others. Because I was afraid he would be struck in the face by a stun grenade. Because that’s what the police here did and continue to do. This is what we tell our sons — on the one hand to be proud of who you are and stand up for yourself, to not be afraid to protest legally; and on the other, to sit quietly at home so that the police won’t hurt them.

Now, weeks after his 18th birthday, Mahmoud is setting out on his own path. He is no longer a minor, and yet I worry whenever he leaves home. The amount of violence that exists in this country, the proliferation of illegal weapons that the police do nothing to stop, the amount of violence from police officers themselves — it all terrifies me.

In spite of all this, I will continue to support him and encourage him to study, work, develop a career, fulfill his dreams and contribute to society, and of course continue to be proud of who he is — in the hope that he will learn something about equality, justice and fairness in the state of which he is a citizen.

Ayat Abou Shmeiss is a poet and blogger from Jaffa.