Israel has been holding Palestinian journalist Omar Nazzal without charge or trial for over four months. In an interview, his attorney says that is because he criticized the PA over its handling of an assassination at its embassy in Bulgaria.

By Oren Persico and Nimrod Halberthal 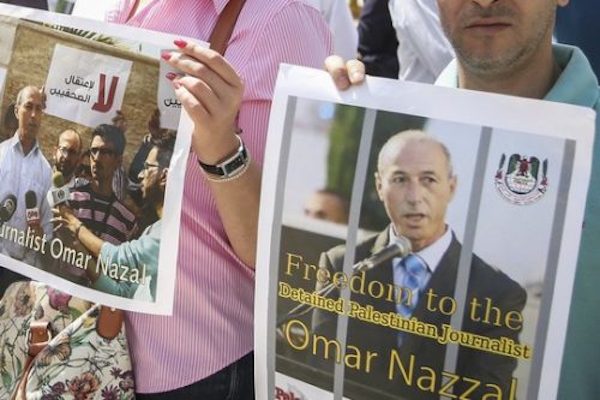 This past April, Palestinian journalist Omar Nazzal set out to travel from his home in the West Bank to a conference of the European Federation of Journalists in Sarajevo. Until about a year ago, Nazzal, 53, was the head of the West Bank-based radio station “Palestine al-Youm,” but left a short while before the station was shut down by the Israeli army. Ever since, he has worked as a freelancer, writing and publishing with various platforms.

When Nazzal arrived at the Israeli-controlled Allenby Bridge border crossing from the West Bank into Jordan, however, the Israeli army arrested him. Ever since Israel has been holding him in administrative detention, which was recently extended until November. The Shin Bet claims the arrest is related to Nazzal being a member of the Popular Front for the Liberation of Palestine (PFLP) and that his arrest is not related to his work as a journalist. Nazzal’s attorney, Mahmoud Hassan, believes the opposite is true.

“He’s a political journalist,” Atty. Hassan told journalists Oren Persico and Nimrod Halberthal on their radio show, Kol Ha’ayin. “He writes excellent articles and an audience that follows every word that he writes. Because it is an administrative detention arrest, we don’t know why he was arrested but we are of the opinion that he was arrested after writing an article about the case of Omar al-Naif.” Al-Naif was a PFLP member who was convicted in the 1986 murder of a Jewish man in Jerusalem, but who managed to escape from the country. In February of this year he was murdered on the grounds of the Palestinian embassy in Bulgaria, where he had been seeking refuge after Israel sought his extradition.

“Nazzal’s arrest at the Allenby border crossing took place after security coordination with the Palestinian Authority, which told him that a travel ban on him leaving the country had been lifted, that the path was clear and that he could travel. Therefore, we suspect his arrest was planned ahead of time by both Israel and the PA, because he caused a headache for the PA with the articles he wrote about al-Naif. Nazzal wrote articles in which he blamed Israel as the main suspect in al-Naif’s murder, in collaboration with the embassy staff in Sofia or with the Palestinian Authority. He angered them when he pointed out that they couldn’t protect a Palestinian citizen who sought refuge in the embassy in Sofia.”

Has he told you what they are interrogating him about?

“It’s administrative detention. They put you in lockup, close the door and leave. There aren’t any interrogations. He still doesn’t know why exactly they arrested him, what the suspicions are against him, if it’s about a specific incident or because of his persona, but the circumstances of the arrest indicate that they wanted a little quiet and chose prison as a way to get some reprieve from his voice.”

The [Israeli] High Court of Justice signed off on the extension of his administrative detention. Was anything said about the suspicions against him in the hearing?

The claim is that outside of his work as a journalist he is an activist — and holds a position — in the PFLP. But we argue that he has legitimate contacts as a journalist. There aren’t any journalists in the Palestinian arena who don’t have contacts in Hamas, or Islamic Jihad, or the PFLP, and who doesn’t get updates and invitations to cover various events. That is the essence of journalists’ work. We also don’t know who they are talking about, which contacts of his, what act [they say] he did. I think that they are portraying him as a dangerous person because of his writings and the political nature of his writing. Nobody can come and say that he did any specific thing [wrong] on any specific day. 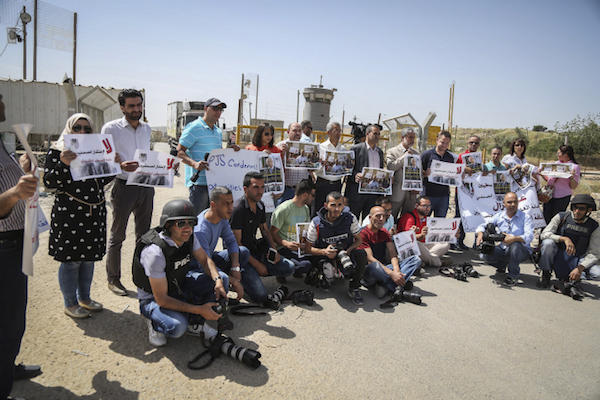 This case has gained a little international attention. Do you think that will help secure his release?

I wish I could answer your question in the affirmative. I don’t know if the [Israeli] security services are influenced by international pressure, but there is pressure. We are in constant contact, his wife especially, with international journalists’ organizations and they are sending letters to the [Israeli army’s] West Bank legal advisor and to the president of the [Israeli] Military Court of Appeals. There is also some movement among Israeli journalists, who have been signing petitions in favor of his release in recent days.

In the High Court of Justice I gave the example of an [Israeli] Channel 10 reporter who entered the Qalandiya Refugee Camp (Hebrew), who coordinated his arrival, his meetings, and his departure with the various groups there. He couldn’t just enter without talking to Hamas or Islamic Jihad or the PFLP. He didn’t just show up and start interviewing people. He’s in contact with them, they send him messages from time to time and he answers them, but nobody is going to interpret that as this reporting joining Hamas or Islamic Jihad. It’s a part of the job of a journalist.

What’s going to happen in November, when the administrative detention order expires?

We filed an appeal against the decision to approve the administrative detention, which hasn’t yet been heard by the court, and we are considering appealing again to the High Court of Justice to have him released.