High-profile Palestinian journalist Omar Nazzal has been arrested on terror charges that Israel considers classified and therefore neither he nor his lawyer can see. The army issued an order to keep him in jail for another four months – without trial. 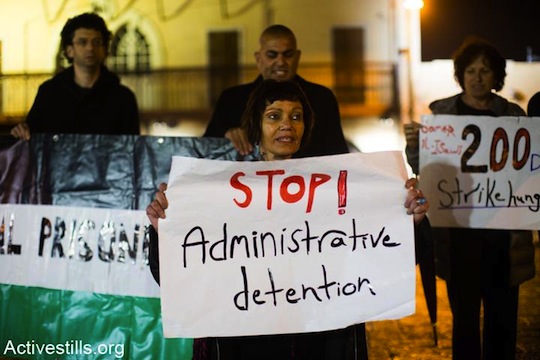 The Israel Defense Forces issued on Monday a four-month order for the administrative detention of Omar Nazzal, a Palestinian journalist who was arrested last week at Allenby Crossing on his way to a meeting of the European Federation of Journalists in Sarajevo.

Initially the Shin Bet claimed that Nazzal, a freelance journalist and a member of the Palestinian Journalists’ Guild, was an active member of the Popular Front for the Liberation of Palestine (PFLP), which Israel defines as a terror group. But Nazzal’s attorney has denied that his client is involved with the PFLP. The military prosecutor acknowledged on Wednesday, at a hearing held at Ofer Military Prison, that there was insufficient evidence to bring charges against Nazzal. Nevertheless, he claimed that there was enough classified material against him to justify administrative detention. The military court accepted this claim.

Nazzal’s attorney, Mahmoud Hassan, tried last week to convince the military court that his client was just a journalist, and that the state could not possibly regard him as an authentic security risk given that the army chose not to arrest him at home, but rather to wait until he arrived of his own free will at the Allenby border crossing in order to travel abroad.

The IDF Spokesperson’s Unit said in response that “Nazzal was arrested for his involvement with the Popular Front that, based on top-secret intelligence submitted to the court, poses a clear and present danger to Israel’s national security. His administrative detention was declared lawfully and as a last resort after every other option to neutralize the danger had been ruled out.”

The detention of Omar Nazzal has elicited condemnations from journalists’ organizations around the world, while demonstrations in his support were held last week in various locations throughout the West Bank and Gaza.