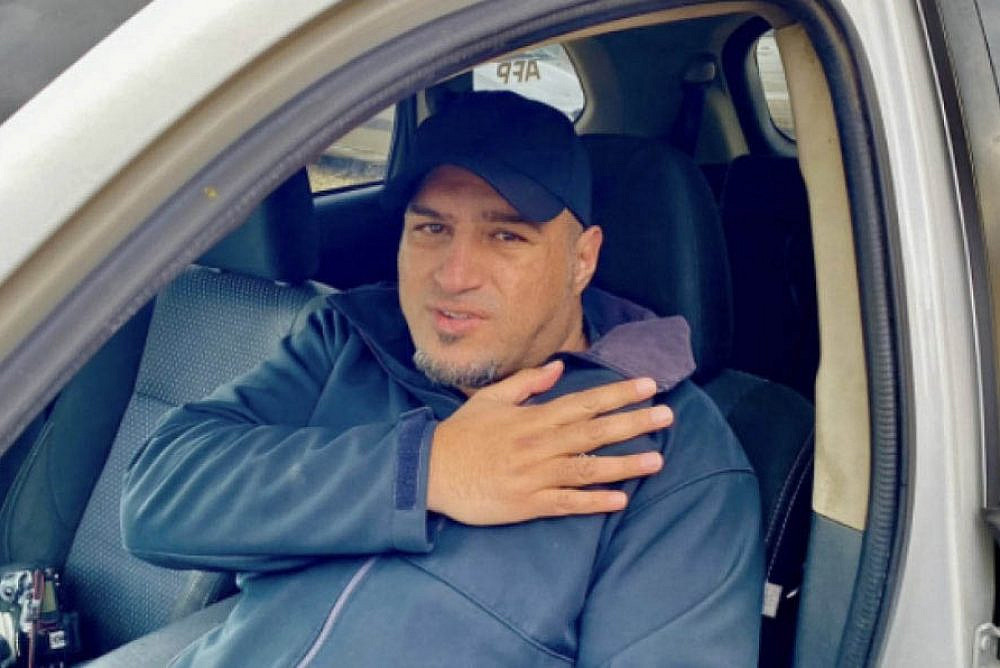 On Tuesday, during a home demolition in East Jerusalem, Israeli police shot a Palestinian photographer in the chest with a sponge-tipped bullet. Ahmad Gharabli, who works for the French news agency Agence France-Presse (AFP), was taken to the hospital for treatment, before being released that evening.

Gharabli and a number of other journalists had arrived at the scene of the demolition in the neighborhood of A-Tur shortly after police began demolishing a two-story housing unit. The homeowner and other residents protested the demolition, upon which the police dispersed them with stun grenades and sponge-tipped bullets.

“I was standing about 60 or 70 meters [195-230 feet] from the police,” Gharabli said. “There was no one nearby, just me and a few journalists. The police were on a hill opposite and fired a sponge-tipped bullet at me without warning. I was surprised, I did not understand where it came from.”

Gharabli noted that he was at the scene long before he was shot. “The officer who shot me was on a hill to my left and was positioned there to protect the police [doing the demolition] from above. He could see the whole area and could clearly tell that I am a photographer. I was standing there for three hours before I was wounded.”

Gharabli described how the incident began as a routine home demolition, the kind that takes place on a weekly basis in East Jerusalem. “The house was evacuated, people took the equipment, the demolition started and then some neighbors came to protest, maybe 10 people,” he recalled. “The photographers were on a hill in the distance behind a stone wall, so we wouldn’t have gone down toward the police. We were six or seven photographers, and the officers saw us — how would we be able to disturb them? I shot with a zoom lens. Every [demolition] the police push and threaten us, so this time I decided we should stand far away from the demolition. I did not know that this would not help me either. 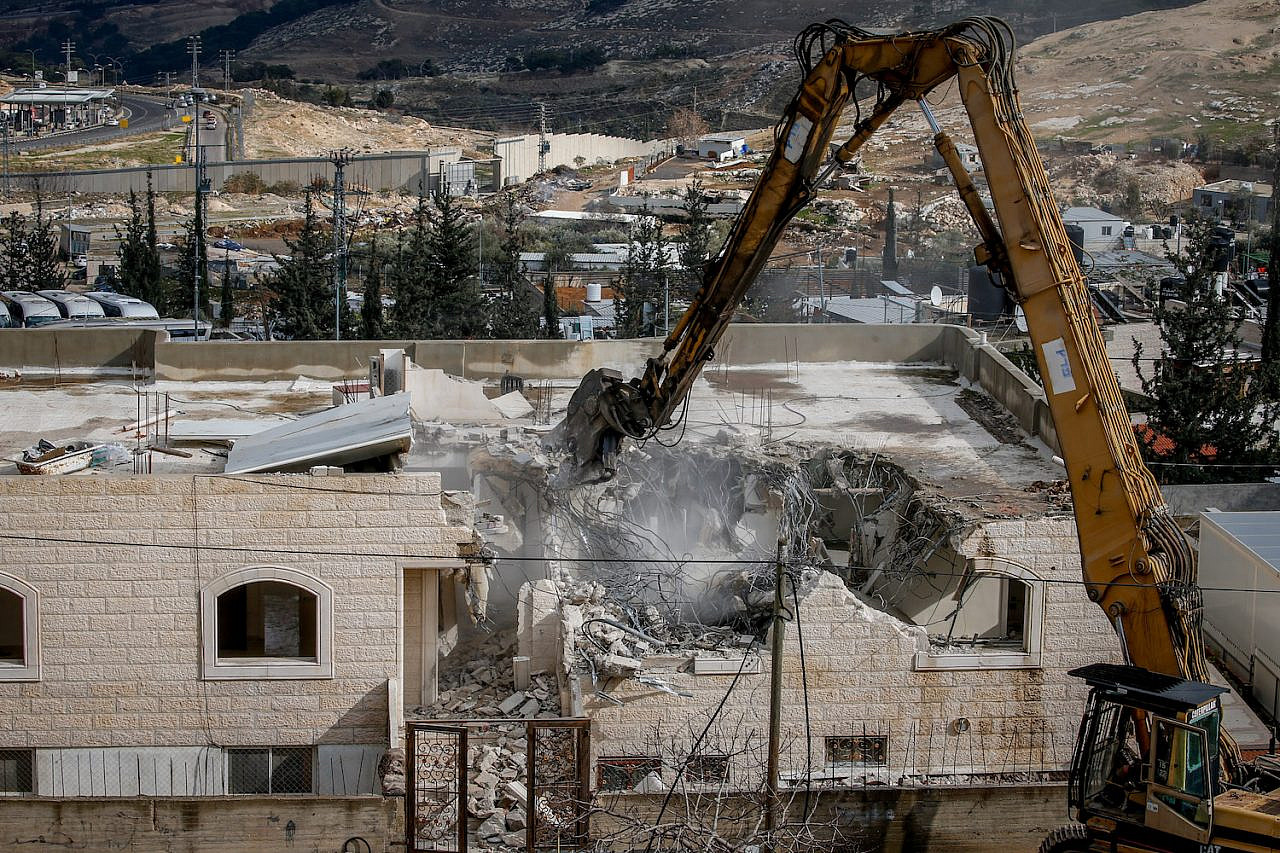 The next day he went back to the hospital for further examinations.

“I was lucky,” Gharabli, who had to return to the hospital for further evaluation the following day, said, “If the bullet had hit a few inches higher up, my situation would be different.” Eight other Palestinian residents were also wounded by sponge-tipped bullets during the demolition.

This is the second time that Gharabli has been wounded by Israeli police in the last half year. In May, amid violence in East Jerusalem, police beat him with batons inside Al-Aqsa Compound, even after he identified himself as a journalist and was carrying numerous cameras. A number of other journalists were also wounded by sponge-tipped bullets at the time, despite not standing next to protesters.

“It can’t be that every six months I am wounded by the police while doing my job,” Gharabli said.”I have two large cameras; I want to ask the policeman who shot me: why shoot? Who did I endanger? Who did I disturb or approach?” Talking to him while he is at home resting and suffering from chest pains, he described the situation in recent months: “Since May the condition has worsened. Lately, I’m scared. Even at this event, I did not get close because I was scared. I stood as far away as I could and I was shot with a sponge-tipped bullet anyway. How will I continue to work? I’m not at war. This was a house demolition, why shoot people?”

#Watch | The Israeli occupation forces fired tear-gas and sound bombs at the Palestinian journalists and photographers who were documenting the Israeli demolition of the Karama family house in #Jerusalem.@gharabli_ahmad pic.twitter.com/AzCEjszEwg

The Foreign Press Organization (FPA) issued a scathing condemnation following the incident, pointing out that “Ahmad was clearly distant from the protesters and the police and was easily recognizable with his camera.” According to the FPA, Gharabli’s injury “raises serious questions about the discipline and professionalism of the officers.” They linked this attack to “similar incidents in which journalists were injured in Jerusalem.”

The statement mentioned the incident in which officers beat AP photographer Mahmoud Illean during a protest in the East Jerusalem neighborhood of Sheikh Jarrah last month. The FPA stressed that after the attack on Illean, the police stated that they would open an investigation, but that “in what has become a pattern, there has been no communication from the police or any evidence of any investigation since then.”

Gharabli noted that in the past he had complained to the Justice Ministry’s Police Investigation Unit (known colloquially as “Mahash”), but that he had no faith the incident would be investigated. “I complained a few times and they did not even reply. Last time I complained in May, they called me in and I went. I explained to them what had happened, but nothing has been done since. Mahash protects police officers, that’s why they continue [to act like this].”

In recent years, Israeli forces have wounded many Palestinians with sponge-tipped bullets in East Jerusalem. In 2014, 16-year-old Muhammad Sunuqrut was killed after he was shot with a sponge-tipped bullet. The case against the officer was closed. In 2016, Haaretz reported that despite one death and 30 injuries from sponge-tipped bullets, not a single indictment had been filed against police officers involved in these incidents.

An Israeli police spokesperson told +972 and Local Call that officers “disperse the riots in order to ward off lawbreakers and continue their activity at the scene,” and that due to the “complexity of the incident and the safety risk in the area,” the officers decided to keep the public at a distance for “fear that they would be harmed as a result of the violent disturbances.”