Fatah-affiliated security forces arrest five journalists in the West Bank; Hamas forces are holding at least one journalist in Gaza. Palestinian rights groups demand both parties keep journalists out of their political rivalry. 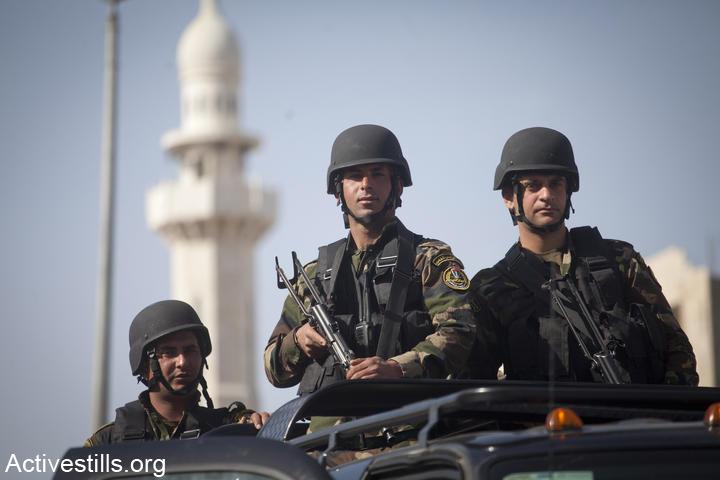 Palestinian Authority security services arrested five Palestinian journalists in the West Bank Tuesday night in what appears to be a worrying manifestation of escalating tensions between Fatah and Hamas.

WAFA also published a parallel report on Wednesday about Hamas security forces arresting and detaining two journalists, at least one of whom works for a Fatah-aligned media outlet. One of the two, Fouad Jaradeh, has been imprisoned for two months by Hamas, which accuses him of collaborating with the Palestinian Authority government in Ramallah, according to a Gaza-based rights group.

The idea that rival political groups are targeting journalists because of their affiliation with either Fatah or Hamas is particularly troubling.

In a statement published Wednesday, the Palestinian Center for Development and Media Freedoms (MADA), “call[ed] on the Palestinian security services in the West Bank and the Gaza Strip to stop the policy of arresting journalists, and keep these journalists far from the internal political division and their internal frictions.”

The split between Fatah and Hamas has escalated in recent months, most notably when Palestinian President Mahmoud Abbas (Fatah) cut off funding for the Hamas-run Gaza Strip’s electricity supply, making an already dire humanitarian situation even worse.

Hamas then made a deal with Abbas’s arch-rival, Mohammad Dahlan, to help the Gaza-based group broker better relations and an alternative source of electricity with Egypt.

MADA condemned the latest arrests of Palestinian journalists as “part of a marked escalation of violations against media freedoms and a blatant violation of the Palestinian Basic Law, which protects freedom of expression and the press.”

The Palestinian Center for Human Rights (PCHR) also expressed concern that internal Palestinian political rivalries “is descending to a very dangerous situation, where the basic rights are denied and public freedoms are totally undermined.”

“PCHR follows with concern the measures taken by the authorities in the West Bank and Gaza Strip, and warns of the arbitrary use of [the law] or fabricating charges to beat their political rivals,” the Gaza-based rights group said in a statement Wednesday.

The Israeli military also targets Palestinian journalists with arbitrary arrests and even missile strikes due to the political affiliation of the media outlets they work for, particularly Hamas-run newspapers and television stations.

The Israeli army regularly shuts down Palestinian media outlets, and arrests and interrogates Palestinian journalists, generally on charges of incitement.

Most recently, Israeli security forces held two Palestinian journalists, Omar Nazzal and Muhammad al-Qiq, in administrative detention for months on end — without charge or trial. Al-Qiq only gained his freedom after a months-long hunger strike that brought him to the brink of death.