Ahmed sat in jail for six days after being accused of trying to attack soldiers with a knife. How many other Palestinians are sitting in jail because of planted evidence? 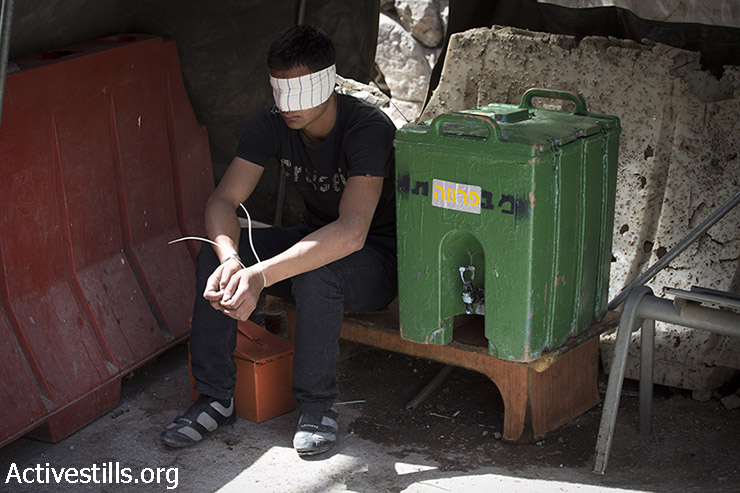 Palestinian youth sits blindfolded in a checkpoint after Israeli soldiers arrested him during clashes in the West Bank city of Hebron, June 16, 2014. (Oren Ziv/Activestills.org)

A Palestinian minor was released from military prison last Thursday after spending a week in detention on suspicion of carrying a knife and attempting to stab soldiers.

Israeli soldiers stationed in the Tel Rumeida neighborhood in Hebron said they saw the youth, Ahmed, walking around a military post with a knife with the intention of stabbing soldiers stationed there. After six days in detention, Ahmad was released with no conditions following several tests that proved that he was not in possession of a knife.

Ahmed was arrested last Friday along with nonviolent activist Issa Amro at the “Youth Against Settlements” community center, where young Palestinians come to learn Hebrew and English, as well as nonviolent tactics against the occupation and take part in video and photography workshops. Following their arrest, dozens of settlers from Hebron — accompanied by Israeli soldiers — arrived at Amro’s front yard, blocking the entry way. The settlers remained there from Friday until Saturday evening under the army’s protection, despite the fact that the IDF itself admit that the settlers and soldiers illegally trespassed on private property.

Amro told +972’s Hebrew sister site, Local Call, that the arrest was “further proof that soldiers are lying with the full support of their commanders, lies that lead innocent Palestinians to be jailed.”

Ahmad himself said that he was assaulted by the soldiers and kept handcuffed on the floor of the base at Tel Rumeida for one night while his eyes were covered.

“I think the soldiers lie a lot, and that they feel like they are above the law and that there is no one who will hold them for crimes,” says Amro. “We suffer greatly from the soldiers’ lies. We have two more teenagers who were accused by soldiers of throwing stones, even though they never did so. Now they are under house arrest and their trial hasn’t ended. We are planning on submitting a complaint regarding the soldiers’ behavior through our attorney, Gaby Lasky. I do not think this will lead to anything, but it is important for us to file this complaint as an act of protest against what took place.”

The soldiers identified a suspicious person who fled while tossing a knife. A young man who matched the description was found. During his interrogation he denied carrying a knife and was imprisoned. His detention was extended by the court. The fingerprints were too weak to prove they were his. A DNA test eventually revealed that the young man in custody did not toss the knife. The need for detention is being examined by the court. The soldiers’ testimonies will be checked and, if necessary, will be handed over to the prosecutor for operational affairs.