Upon our visit to the Qumran Caves we appeared to be strange and unusual creatures, as Palestinians do not usually come here. The Israeli family that we met did not even understand why we are not allowed to visit the Dead Sea. 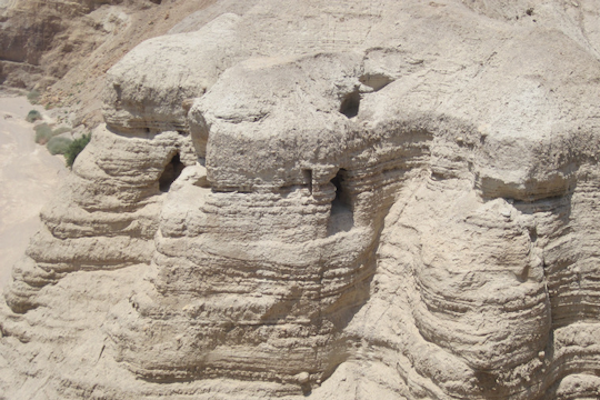 On the banks of the Dead Sea is an ancient village belonging to a tribe that abandoned their lives and the commotion above, descending to the lowest place on earth, as if they had descended below the earth to the home of Hades, god of the underworld. They retired to a life of simplicity, humility, and purity, carving their writings on scrolls that they delicately rolled and hid in the belly of the earth, until they were found 2,000 years later.

We arrived to Qumran in the middle of the day, after the temperatures had already risen to this year’s record high. The parking lot was completely quiet and there were no vehicles apart from one bus whose driver was fast asleep in its air conditioning. The three of us parked our motorcycles in a parking space allotted for one car in order not to take up too much space. We walked in the shade past the security guard who sat by the shaded entrance, struggling not to fall asleep. He sat in his chair with his legs outstretched and his head tilted back. Big sunglasses hid half his face. I said hello to him but he did not answer.

The three of us sat by the ticket booth to eat fruits and talked a bit until the guard cut us off when he awoke from his slumber, noticing that our bikes had three foreign license plates, as if they were not from this country, as if they came from the moon.

He acted as if the devil had possessed him, dashing toward the motorcycles to check them out, speaking into his radio: “Three Palestinian license plates, numbers 69… 33, 48… 65, and 64… 30.” He turned to Omar and said: “Come with me, I want to check your motorcycle. Open your bag, take your bike onto the sidewalk here.”

He returned to us, still talking on his radio and repeated the numbers on our license plates. He asked us to move the motorcycles onto the sidewalk, “It’s a parking lot for buses not motorcycles. Park your motorcycles on the sidewalks,” he ordered in his Russian Hebrew. 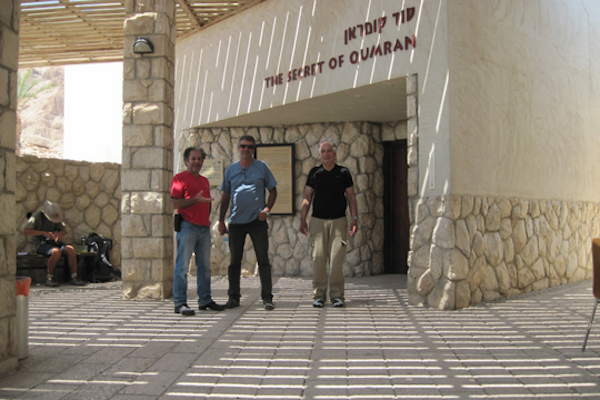 Motorcycles at the entrance to Qumran. Bassem on the left. (Bassam Almohor)

The lady at the ticket counter, however, smiled at us. “Twenty-nine shekels per ticket. We don’t have brochures in Arabic about Qumran, Arabs don’t come here, you’re the first, though the film screened inside is translated into Arabic,” she continued to smile. “You can leave your coats and helmets here, I’ll keep an eye on them,” she added with considerable admiration. God! We were welcome here in this place run by Israelis.

Where are the keys to the house?

The sun beats down here, 330 meters below sea level. There is one lady here with a hat to protect her from the sun. She walks ahead of us and looks at the bathrooms that were renovated with huge sums of money. “This village has been so carefully renovated to the point that it doesn’t look like an archaeological village, but rather as if it were built yesterday. Right?” I asked her and she completely agreed with me. “You came from Jordan on your motorcycles, right? She inquired. “From Jordan? Why? We are from this country, from Ramallah.”

I do not know why this woman thought that we were from Jordan. Is it related to the fact that we are from the Jordan Valley? She was visiting Qumran with her family, and lives on the coastal plain in Netanya. We talked a bit and she introduced her family, her partner Yishai who is in his 50s, and their three children.

Yishai asked us why we don’t visit the coastal areas, “Why don’t you ride your motorcycles to the sea? It’s close. Come with us, we’re sleeping in a hotel in Ein Gedi, come eat lunch with us there.” 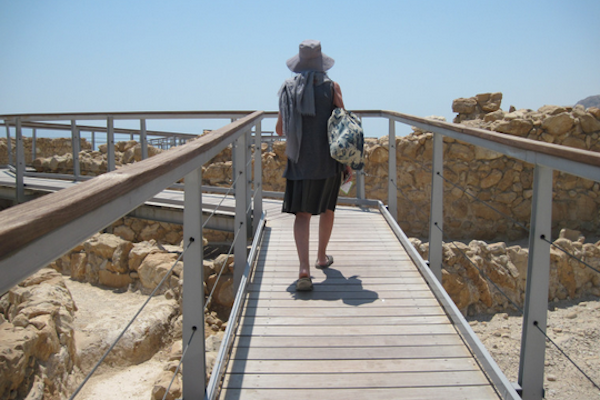 What do Israelis know about the occupation? A tour of Qumran. (Bassam Almohor)

Israelis do not know anything about the reality in which nearly 5 million Palestinians in the West Bank and Gaza Strip exist. They do not know things that seem so obvious and clear that there is no need to ask about them, for example why we are prohibited from visiting Ein Gedi.

And really, why should Israelis remember that our freedom of movement is limited to the degree of terrible boredom? Why should Israelis living on the coastal plain, very far away with their backs turned to us, remember that there are 5 million Palestinians living under occupation without freedom of movement, air to breathe, and the keys to the house?

When I told Yishai that we live under his country’s occupation, he did not understand what that word meant. He could not make the connection between the occupation and our lack of freedom of movement, along with the checkpoints that they probably do not see. Should I be angry? I do not know. It really saddens me, and sometimes even makes me laugh.

This piece was originally published in Bassem’s blog in Arabic, and was translated into Hebrew by Dima Darawshe for Local Call. Read it here.