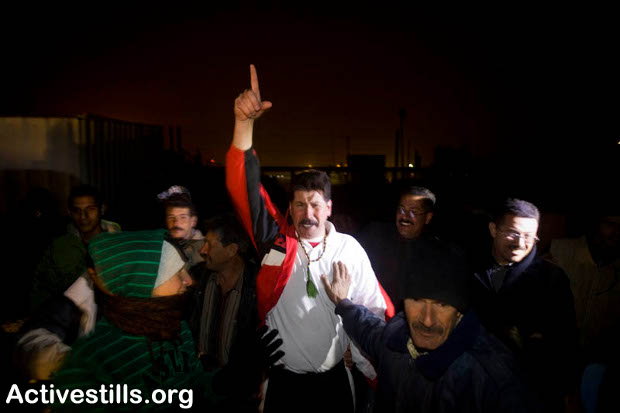 Adeeb Abu Rahmah moments after being released from Israeli prison. (photo: Oren Ziv/Activestills.org)
Before he had even reached the gate of Ofer military compound, Adeeb Abu Rahmah had his hands in the air in celebration. Abu Rahmah crossed the iron gate of the compound and walked into freedom after eighteen months in military prison. Despite the frigid mountain air, the warmth of Adeeb’s presence could be felt strongly by all present. He embraced his daughters immediately with tears in his eyes. With barely a moment to catch his breath, Adeeb kissed and hugged everyone that was present, occasionally throwing his hand high in the air with a peace sign and yelling out one of the many chants that are common on demonstration days in Bil’in.
[youtube]http://www.youtube.com/watch?v=-St2hn_qPwE[/youtube]

A taxi driver and father of nine who has been active in the unarmed resistance in Bilin from its outset, Adeed Abu Rahmah was arrested in Bil’in on July 10, 2009 while taking part in one of the weekly Friday protests. The Israeli army accused him of participation in ‘violent demonstrations’ against the Israeli separation wall, presence in a ‘closed Israeli military zone’ and disturbing public order. 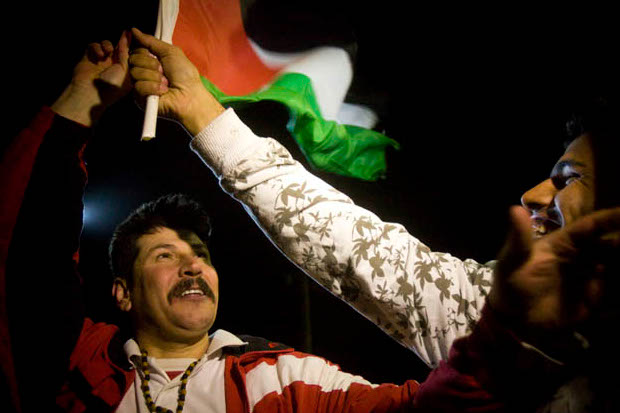 From the jail, a large procession of cars drove slowly towards Bil’in with music blaring, flags flying and lots of honking. A Palestinian Gandhi had been set free. Once in Bil’in, fireworks, dancing and chanting filled the winter air as the village broke out in celebration. Banners covered houses with pictures of Adeeb demanding a ‘release to the prisoners of the Popular Struggle.’ Among those greeting Adeeb were a handful of Israelis and internationals who have created deep bonds with the people of Bil’in through joint struggle. As the wind and rain continued pounding Bil’in, the celebration moved inside. In the long battle of non-violence in the West Bank, a small victory was felt in Bil’in last night. A Palestinian Gandhi returned home to his village and his people.