UPDATE: Issa Amro was released on Sunday evening from Israeli prison after being held since Thursday. He had to pay NIS 1,500 upon being freed, and his terms of release include a  guarantee of NIS 5,000. He is prohibited from engaging in demonstrations for the next 3 months.

Issa Amro, Coordinator of Youth Against Settlements, was stopped Thursday night by Israeli authorities at the Allenby Bridge. He was arrested and taken to the Hebron police station, where he was interrogated for hours on suspicion of involvement in organizing the women’s action that took place in Hebron last Wednesday, at the segregated Shuhada Street.

Amro was traveling to Italy for a speaking tour organized by the Italian Peace Association to meet members of the Italian Parliament and Senate, and municipality representatives from different Italian cities. 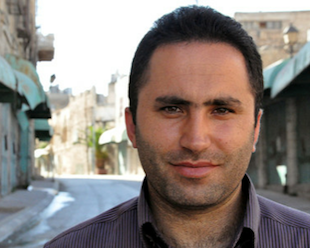 Issa Amro, a prominent popular resistance activist in Hebron, was arrested several times in the past by the Israeli army for participating in activities to protest occupation practices in Hebron. In the past few years, Youth Against Settlements has led the global campaign to re-open Shuhada street, Hebron’s main commerce center that was closed to Palestinian movement in 1994.

Last Wednesday, approximately 15 Israeli and International women dressed in Palestinian traditional clothing walked through Shuhada Street in silence protesting the policy of preventing Palestinian women from accessing the street.  The women were stopped by Israeli soldiers and attacked by both soldiers and settlers.  Five activists and one journalist were arrested during the action. Later that day, a Palestinian man was also arrested on suspicion of “conspiracy” related to the same action. All seven were released within 24 hours, three with a a 90-day restraining order forbidding them from entering Area A and the Hebron area.