Neither Palestinians nor Israelis should be fooled into believing that separated bus lines are part of an overall policy that benefits Palestinian workers. 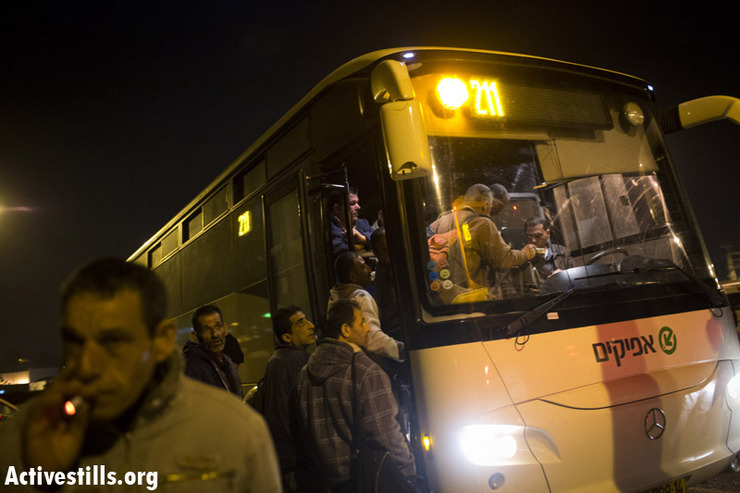 Palestinian workers with Israeli work permit stand in a line to broad a Israel bus line only for Palestinians, after they crossed the Eyal checkpoint, near the West Bank city of Qalqilya, March 4, 2012.

The announcement that Israel’s Ministry of Transportation would begin a “Palestinian-only” bus service from the Eyal checkpoint in the West Bank might appear to be a harmless policy. Indeed, many Palestinians working in Israel may be inclined to use the new service. If the advertisements are correct, Palestinians might avoid overcrowded buses, save hundreds of shekels from cheaper tickets, and even avoid unnecessary scuffles with Jewish settlers on the bus.

The catch is that these messages are being used by Israel to force Palestinians to conform to a rather twisted agenda. Despite the Ministry’s attempts to sugar-coat the initiative as a policy to help the workers, neither Palestinians nor Israelis should be fooled into thinking otherwise: the government is incentivizing segregation. In this case, the segregation is born out of the desire to keep the occupied population at a distance, away from the state’s infrastructure and its settlers.

The new bus service is an institutionalization of this racist agenda, adding another feature to a system described at best as a segregationist society, and at worst an apartheid regime. Fears that Palestinians will be forced off the original bus lines and required to use the Palestinian-only buses are a disturbingly real prospect; disturbing for its moral reprehensibility and for the social-economic dynamics it shapes.

This is certainly not the worst case of state-sanctioned discrimination in the Occupied Territories, and it won’t be the last. What makes the bus case notable, however, is that it starkly presents the pervasiveness of the state’s segregationist mentality by evoking the memory of the infamous buses under the Jim Crow laws of the southern United States, when black Americans had to sit at the back of public vehicles, or were forced to give up their seats for white passengers.

It is in the spirit of that memory that this writer, alongside many other activists and citizens, would appeal to the Palestinian population to emulate the Montgomery Bus Boycott of the Civil Rights Movement against Israel’s new bus service – a “Qalqilya Bus Boycott”. Palestinians should instead continue to use the original bus lines, in defiance of the attempt to separate passengers by their nationality. It not only sets a principled stance against the idea of segregation, but also condemns the Israeli state for bowing to the wishes of the settler population – and for entrenching the occupation’s policies ever further.

Such a boycott demands sacrifices and steadfastness from the Palestinian workers. But these are the same costs that were endured by black American boycotters in Montgomery, Alabama, whose nonviolent struggle succeeded in abolishing racial segregation on public transportation, a significant step forward in the movement for freedom and equality.

It is that same foresight and dedication that Palestinians must employ against Israel’s separate bus services at the Eyal checkpoint. It is not the most important issue in the Israeli-Palestinian conflict, nor will it create drastic changes. But it is a symbolic battle that Palestinians should confront to reveal to Israelis just how far the occupation’s racism goes, and to show that Palestinians refuse to accept Israel’s incentives to make them tolerate that racism.

Amjad Iraqi is an International Advocacy intern at Adalah – The Legal Center for Arab Minority Rights in Israel. He is a graduate of the University of Toronto with a degree in Peace and Conflict Studies. The opinions expressed in this article are solely those of the author’s and do not represent the views of Adalah or +972 Magazine.