A near-universal conviction rate, testimonies provided under duress, prolonged detention, the absence of attorneys and tolerance to crimes by IDF soldiers: the trials of Bassem Tamimi and Ashraf Abu Rahmah demonstrate the lengths that military courts will go to in order to keep peaceful Palestinian activists behind bars. 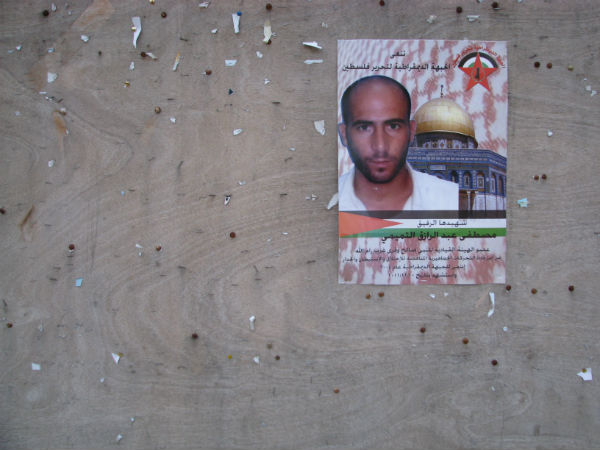 99.76. That, according to a new study, is the percentage of convictions in Israeli military courts in which Palestinians in the occupied territories are tried (for some reason the translation of this piece to English has it at 99.74, perhaps trying to make things look better for the foreign audience ). It is a figure not too remote from the one former Egyptian President Hosni Mubarak used to enjoy in his periodic re-election “victories,” and it is one worth remembering as we examine the recent updates in the trials of popular resistance activists.

It is worth remembering as we consider new developments in the trial of Bassem Tamimi, a local organizer in the village of Nabi Saleh. Tamimi was arrested in March, charged with inciting the village’s youth to hurl stones at soldiers (a charge which he outright denies, in light of his commitment to non-violent action). He has been held in custody since. In June, he declared the trial illegitimate, and said that “despite claiming to be the only democracy in the Middle East, you are trying me under military laws which lack any legitimacy; laws that are enacted by authorities that I have not elected and do not represent me.”

Two sessions in Tamimi’s trial took place last week at the Ofer military court. The first was the interrogation of prosecution witness Islam Dar Ayyoub, a 15-year-old boy, who was just 14 when first interrogated about Tamimi. In his testimony before the court, Dar Ayyoub stated that his initial statement at the police station was taken under duress. One person who attended the trial – alongside twelve diplomats from EU countries who came to monitor the trial of Tamimi, who was recently acknowledged by the EU as a Human’s Rights’ Defender – reported that during the boy’s arrest, “He was beaten up and kept in blindfold and handcuffs for several hours until the interrogation. Dar Ayyoub said to the court that he had been advised by one of his interrogators before the official questioning began to point out Bassem and Naji Tamimi as main organizers, and made to believe by another that he would be released if he does.”

A recorded video of the interrogation shown in court exposed the fact that the minor was questioned by three adult policemen, without being read his rights, and without the presence of his parents or a lawyer, as required by the law. Dar Ayyoub is seen yawning and crying during the interrogation.

The following day, two more testimonies were given in court, those of Mo’atassem Tamimi, 15, and Udai Tamimi, 20. Both of these witnesses for the prosecution said to the court that they were told by interrogators to frame their relative, Bassem. Like Dar Ayyoub, Mo’atassem Tamimi was also handled as an adult in his interrogation, and denied sleep. Udai told the court directly and simply that Bassem and the rest of the leadership were promoting non-violent resistance, while he and other youngsters were disobeying their elders when throwing stones. It is worth mentioning that both these witnesses were arrested by the army in the dead of night, about a week before their testimony, and held in custody just so that the army could ensure they would testify. Bassem himself is still detained, and will be so for the remaining period of his trial.

Meanwhile, the army is also pressing charges against one of Bil’in’s most prominent activists: Ashraf Abu Rahmah – a dedicated non-violent activist, whose brother and sister were killed by the army during demonstrations against the separation barrier in the village. Abu Rahmah was arrested in Bil’in on October 21, and is charged with throwing stones at soldiers. On the face of it, the prosecution is likely to have a hard time reaching a conviction, as the soldiers testifying against Abu Rahmah supposedly saw this action from a distance of about 100 meters, while Israeli activists who stood next to him testify he did no such thing. This, however, did not persuade the judge or the military court of appeals, with both ruling that he is to remain in detention until the end of proceedings. According to the prosecution, one of the reasons for this decision, along with the desire to ensure Abu Rahmah appear for sessions, is to “make sure he no longer participates in demonstrations.”

Abu Rahmah is likely to stay in prison for many more months. With a conviction rate of 99.76 percent (or even 99.74 percent), his chances of being acquitted are close to naught, no matter what he actually did or did not do. It is interesting to compare this case with that of Lieutenant Colonel Omri Borberg and Sergeant Leonardo Korea. In 2008, the two arrested Abu Rahmah in a demonstration, and were caught on camera shooting him in the foot with a rubber coated bullet at point blank while cuffed and blindfolded. After a long judicial ordeal, the former was found guilty of making illegal threats. His punishment is a two-year promotion freeze. The latter was found guilty of the illegal use of a weapon, and demoted to the rank of First Private. None of them spent a day behind bars. Abu Rahmah has been in prison for more than a month now.