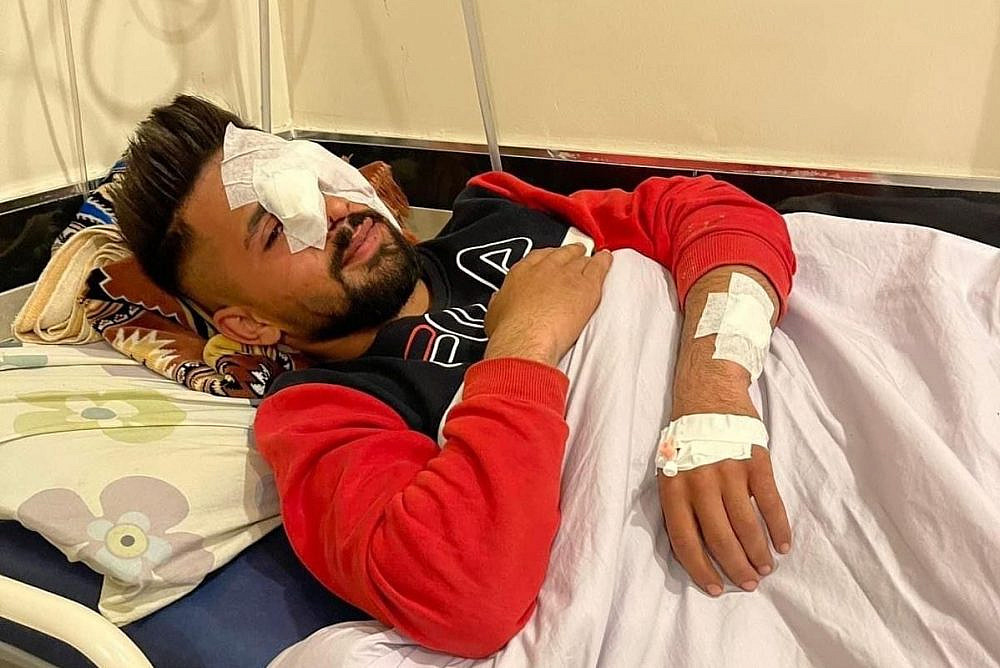 Israeli Border Police officers were filmed throwing a stun grenade without cause at a Palestinian man who lost his left eye as a result of the explosion. The video — which was taken on Jan. 2 in the area of Asira ash-Shamaliya in the north of the occupied West Bank, and which went viral on social media in the days following the incident — showed 20-year-old Abdullah Rawajbeh leaning on his car and smoking a cigarette on the side of a road when a military jeep drives toward him with the door open. Suddenly, the video shows a grenade being thrown his way, leading Rawajbeh to recoil.

“I work with my brother in road paving,” Rawajbeh told +972 a few days after the incident. “While we were working, dozens of army jeeps and bulldozers passed by, so we stopped to look at them. My brother was filming the convoy from inside the vehicle when suddenly threw a stun grenade at me, and it exploded in my face. People ran to me, called for first aid, and I was taken to the hospital. The doctor told me after some tests that there was nothing they could do — my eye was gone. I had an operation and they removed it. I’m blind. In a few weeks they will insert a glass eye, for the sake of appearance.”

That morning, the army demolished the homes of those responsible for a fatal shooting attack at the Jalama checkpoint near Jenin in September, killing Israeli army officer Bar Falah. During the demolition in Kufr Dan, soldiers killed two young Palestinian men: Fouad Abed and Mohammad Hoshiyeh.

In response to an inquiry by +972, the Border Police spokesperson said: “When the forces left the village, explosive devices and stones were thrown at the soldiers, including from the route of travel seen in the video, and measures were therefore used to disperse demonstrations.” This is despite the fact that in the video it can be clearly seen that there was no act of resistance, stone-throwing or otherwise, when the grenade was thrown at Rawajbeh.

‘I want whoever hurt me to be brought to justice’

Rawajbeh described the insecurity and fear that he feels in places where he previously felt safe. “Recently, there is a feeling that wherever you are, whether it’s at work or on the road near home, soldiers can shoot you. Even if you don’t participate in confrontations, if you don’t do anything, just go to work and come home, you can’t know what will happen to you.”

The medical report from An-Najah Hospital in Nablus where Rawajbeh was treated stated that he arrived with a tear in his left eye and a destroyed optic nerve. His eye is swollen and closed, and his face contorts in pain as he speaks to remove the clear protective covering and clean the area with a small sponge.

Upon his release from the hospital, Rawajbeh’s home filled up with journalists, and he was forced to tell the story over and over again: “There were no confrontations — nothing. [The officers] were on their way back from the demolition and shot me for no reason,” he answered in response to their questions.

His brother, Abadah, who filmed the video, told +972 that as well as the stun grenade that wounded his brother, the soldiers also threw two tear gas grenades at his car. “One grenade broke the windshield, and I fainted from inhaling too much gas and smoke,” he said. “Only when I woke up did I find out what had happened.”

Abadah explained that the brothers always work together for a contractor as a duo to provide for their families. Now, however, after his brother’s injury, they have no way of doing so. “We will try to act on the legal front against the occupation,” he said. “But beyond the economic harm, there is also mental harm.”

“I want whoever hurt me to be brought to justice, for the soldier who caused me to lose an eye to at least pay for it,” Rawajbeh said. “Every day someone dies, every day someone is injured or imprisoned. I feel part of a continuum, like everyone who was before and everyone who will be after.”