A Palestinian man died in Israeli custody, reportedly during or after being interrogated by Israel on Saturday. The death comes amid spreading West Bank protests in solidarity with hunger striking prisoners. Near Nablus, settlers reportedly shoot a Palestinian man in the stomach. 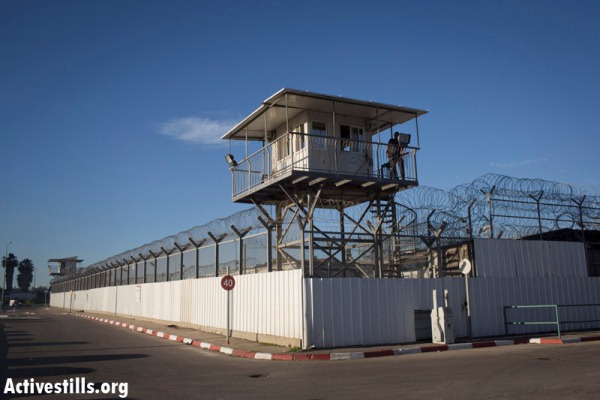 Ayalon prison facility, near the city of Ramla (photo: Activestills)

A 30-year-old Palestinian man, Arafat Jaradat, died while in Israeli custody today. According to Palestinian human rights organization Al Haq, Jaradat is believed to have died either during or shortly after he was interrogated in Meggido Prison.

Speaking to the Agence France Presse, a spokeswoman for the Israel Prisons Service confirmed the death. She claimed, “It was probably a cardiac arrest.”

But Al Haq reports that Jaradat, who was arrested on February 18, had no known health conditions. Jaradat was from the West Bank village of Sa’ir, which is north of Hebron. He is survived by two children and his wife is reportedly pregnant with their third child.

According to B’Tselem, more than 4,500 Palestinians are being held in Israeli prisons; 178 of the detainees are being held without trial in administrative detention. The UN reports that approximately 700,000 Palestinians have been held in Israeli prisons since the occupation began in 1967. Many of these prisoners have been held without charge on administrative detention orders. Children have also been jailed. In 2012, 143 children between 16 and 18 were held in Israeli jails, including 21 minors under the age of 15.

Jaradat’s death comes as Palestinian prisoner Samer Issawi has been on hunger strike for over 200 days. Al Haq reports that Issawi’s family is being harassed by Israeli forces. Issawi’s brother, Shadi, was arrested last week; Issawi’s sister, Shirin, was detained for 24 hours in December and was put on house arrest. On New Year’s Day, Israeli forces razed the home of Issawi’s brother, Rafat.

On Saturday, 26-year-old Hilmi Abdul Azizi was reportedly shot in the stomach by Israeli settlers who invaded the village of Qusra near Nablus, he was in serious condition in a Nablus hospital. A 16-year-old boy was also shot in the leg in the same incident.