Bassem Tamimi has been sitting in an Israeli prison for over a year. Tamimi is a prominent Palestinian activist from the West Bank village of Nabi Saleh, where he has led the small village’s popular unarmed struggle against Israeli occupation and takeover of land since its beginnings at the end of 2009.

Tamimi was arrested in his home on March 24, 2011 for organizing protests and inciting against Israel, based on testimony by Islam Dar Ayyoub, a 14-year old resident of Nabi Saleh who was taken from him home in the middle of the night by Israeli forces for interrogation. His military trial is still ongoing.

Tamimi has been arrested by Israel a total of 11 times and spent around three years in administrative detention, but never convicted of an offense. Amnesty International has declared him a prisoner of conscience and called for his release.

This photograph was taken of him in his home yesterday, April 16, after he was permitted a temporary release from prison for 48 hours to visit his mother in the hospital, who suffered a stroke. 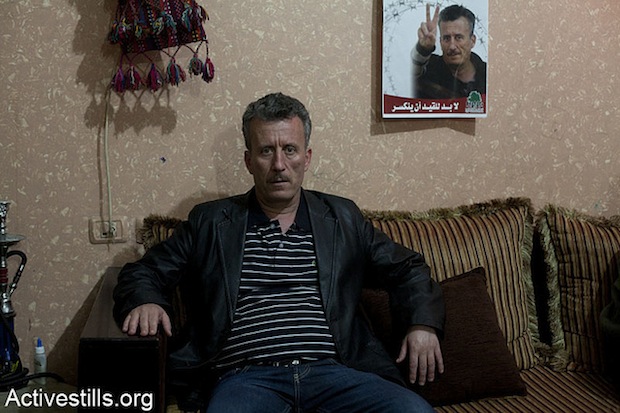 Read Bassem Tamimi’s statement to the military court nearly a year ago here, in which he explains his motivations for civil disobedience and fight for justice.