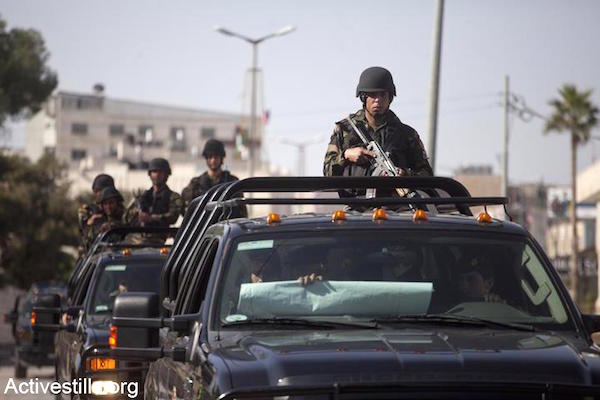 File photo of Palestinian security forces in the West Bank. (Photo by Activestills.org)

Palestinian security forces in Ramallah kidnapped and held a teenager hostage for three days in order to compel his father to turn himself in, according to affidavits secured by human rights organization Al-Haq.

The child was released when his father was eventually taken into custody.

Husam Abu Saleem, 16, was at his Ramallah home on the afternoon of September 18 when two military jeeps pulled up looking for his father, Jamal Abu Saleem. When he told the officers that his father wasn’t at home, a man identified as Brig.-Gen. Sharif ordered the teen be taken into custody.

When the boy’s mother attempted to intervene, Brig.-Gen. Sharif allegedly told her, “even if he stays for three months, he will not be released until his father surrenders himself.”

Kawthar Abu Salem, Husam’s mother, was familiar with the officer because her husband, who the security forces were looking for, works for the Palestinian National Security Forces.

“[T]he military jeep drove off and took me to the NSF Headquarters near the Ramallah Cultural Palace,” Husam recounted in his affidavit. “There, I was taken to the ground floor of the building. When I inquired why I was arrested, they said it was ‘from the brigadier general’.”

Security forces brought Husam a mattress and only two meals a day while he was being detained, he said.

In a letter to Palestinian President Mahmoud Abbas and Prime Minister Rami Hamdalah, Al-Haq director-general Shawan Jabarin noted that taking children hostage, or anyone for that matter, is a grave violation of international and Palestinian law. Furthermore, the Palestinian human rights NGO demanded that those responsible for the incident be held accountable.

The Prime Minister’s Office responded that there is no justification for holding a child hostage and that it does not reflect official policy,” according to Al-Haq. Regarding holding the NSF officers responsible before the law, the PMO stated that it has “alerted the party that caused this violation” and such an incident “will not be repeated.”

Read also:
It’s time to imagine a future without the Palestinian Authority
Why isn’t the West Bank rioting, too?