They navigate the racetrack, Palestinian society, competition in a male dominated sport, and a military occupation. But “outside the car is one thing. Inside the car is another world.” So begins the trailer for a documentary in the works that tracks the lives of five women race car drivers – Palestine’s own “Speed Sisters.”

Betty Saadeh, Maysoon Jayyusi, Noor Daoud, Marah Zahalka, and Mouna Ennab make up a team of Palestinian women competing against men and one another in monthly autocross races in the West Bank city of Jericho. Their lives are documented in “Speed Sisters,” a film directed by Amber Fares.

Fares, a Canadian filmmaker living in Ramallah, met the women when she was tapped to make short films about them for a British Consulate project. Those films have turned into what will be a full-length documentary. Fares hasn’t finished filming, but her movie has already generated substantial online buzz and has been picked up by Bungalow Town Productions, a prominent British documentary film company. A grassroots donation campaign was recently launched to bring the film into post-production, and funding from high profile film foundations is on the horizon. If all goes according to plan, the film will be released in the fall of 2013. 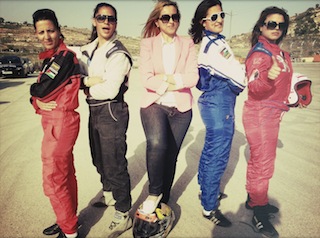 The Speed Sisters range in age from 21 to 34, and hail from all over the West Bank. Two grew up abroad, like Betty, 31, who was born in Mexico and returned to Palestine with her family during the Oslo period. (She is also the only Speed Sister to enjoy corporate sponsorship, from Peugeot.) Others, like Marah, 21, have spent their lives in Palestine. Maysoon, 34, an UNRWA employee from Ramallah, manages the group and is also an occasional racer. They all enjoy support from their families for what some – inside and outside the West Bank – may consider an unorthodox or unacceptable passion for women. (Marah, in fact, developed her taste for the road as a child, listening from the backseat as her mother, a driving instructor, gave lessons.)

Not just any hobby

In the West Bank, driving and racing evoke more than a means of transport or a fast and furious hobby. The military occupation that controls Palestinian roads often turns what would otherwise be a simple drive into a maze of checkpoints, permits and interrogations. Despite these obstacles, cars also represent ultimate freedom for some.

“Cars have a lot of symbolism in terms of freedom, in terms of movement, and in terms of control,” says Fares. “When you’re living a life without a lot of control and freedom, it [racing] really attracts a certain kind of person. And it’s surprising, when I tell other Palestinians about it, Palestinians I would never imagine, including women, are like, ‘Oh my God, I love to drive. I must drive.’”

[Suna, an early Palestinian woman racer and the first woman to break the top 10, describes her love of cars. She is now retired from racing]

Some of the early buzz is no doubt thanks to the exoticism, in Western eyes, of the film’s subjects: women in souped-up cars defying the Israeli occupation and Middle Eastern stereotypes to overcome odds and leave their male competitors in the dust. But Fares is determined not to reduce her subjects to victims of patriarchy or military occupation. She has developed close relationships with the Speed Sisters after three seasons with them on the tracks, and says that her own Middle Eastern origins have helped pave her way into their lives and homes, while enabling a personal exploration of her Arab roots a century after her grandparents left Lebanon for Canada. 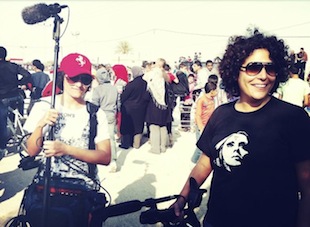 “Obstacles of the occupation aren’t the only obstacles that they face. The idea is to show these women’s lives. And through their lives you see Palestine, and you probably see it in a different way. You see the freedom in it as well as oppression. Because they do have a lot of freedom, and much more freedom than people would think. You see them and you’re like, this girl is just like me, she is 30-something years old, she’s not married, her parents want her to get married, she wants it to be the right guy, the choices are limited. I mean, come on. We all see that and understand what she’s going through.”

“I’m not out to make a political film,” she continues. “But you can’t make a film about Palestine without it being political. Their lives are political. I don’t want to make a film where the occupation is the third character. But will there be shots of the wall? Yeah, you can’t really avoid that.”

Click here to visit the official ‘Speed Sisters’ site, and here to learn how you can help get this film made.