An affidavit obtained exclusively by +972 reveals what appears to be the first documented case of a ‘human shield’ used by the Israeli military during its invasion of the eastern Gaza town of Khuza’a.

Ahmad Abu Raida, now 17, was separated from his family by Israeli soldiers on July 23 as he and his family were trying to flee to safety. During Abu Raida’s five-day captivity, an Israeli soldier, who insisted he be called “captain,” repeatedly asked the boy about alleged Hamas tunnels and rocket launching sites in his neighborhood.

“I told him I did not know,” Abu Raida, who was 16 years old at the time of the incident, said. “‘I’m young. I’m 17 years old. How am I supposed to know these things?’ I said to him, but he became angry and started punching and kicking me.”

Abu Raida’s case was documented by Defense for Children International-Palestine, which released a statement Thursday based on the affidavit it collected. +972 spoke with the 17-year-old earlier today.

Abu Raida’s ordeal followed two days of intense shelling from Israeli tanks, which had crossed the Gaza border near to his home. When his family decided to try and escape on foot, they were stopped by Israeli soldiers.

“I heard a soldier on one of the tanks ordering women, children and old people to stand on one side, and those between 20 and 40 years old to stand on the other side of the street,” Abu Raida said in the affidavit.

After seeing that men in the 20-40 group were taken to an empty field and made to strip down to their underwear, the 17-year-old “took two steps back to see what was going on.”

When he did, Abu Raida said an Israeli soldier took him to the open field, about 100 meters from the group of men, tied his hands with a plastic chord, and forced him to kneel down. According to Abu Raida, the soldier then proceeded to punch him in the stomach and face while saying repeatedly, “You’re not human, you’re a dog.”

At around 4 p.m., according to the affidavit, the men were taken away for questioning and the women, children and older residents were released. Abu Raida was blindfolded, made to strip to his underwear, and taken to a house. 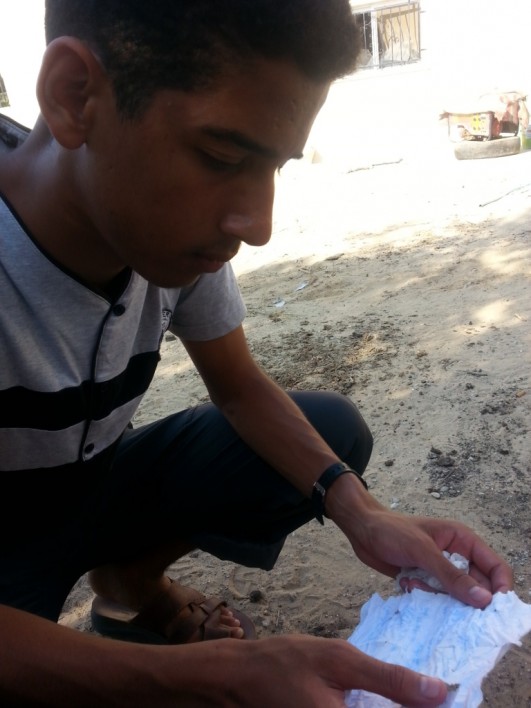 Ahmad Abu Raida holds a the letter he wrote while detained by Israeli soldiers and used as a human shield in Gaza for five days from July 23, 2014 in Khuza’a, Gaza Strip. (photo: DCI-Palestine)

“When the blindfold was removed, I found myself inside the house surrounded by more than 20 soldiers,” Abu Raida told DCI-Palestine. Someone “in military uniform” then approached him and shouted in broken Arabic: “I need to settle the score with Hamas. Are you Hamas?”

After the questioning, Abu Raida was taken to a nearby house, with soldiers forcing him to walk in front of them, the affidavit said. After they gave him “water, two cookies and some nuts,” the soldiers made Abu Raida sit in a chair and tied his hands behind his back.

Abu Raida told +972 that the fear he felt that first night was compounded because he “had no idea what was going to happen.” He added that “there was no one else in the area,” as most of Khuza’a’s residents had fled following the Israeli ground invasion.

“I was blindfolded at night,” Abu Raida told +972, “but I always tried to see where I was before they put the blindfold on.”

Abu Raida described being taken out of the house the following day, at about 1 p.m., by a soldier who “made me walk in front of him and [ordered] me in broken Arabic to [turn] ‘left and right’. He was walking about three meters behind me.”

The soldiers then took Abu Raida to two houses, ordering him to “[g]et in and see if there are tunnels or not,” according to the 17-year-old. He told them that he did not find any, which prompted the “captain” to physically assault the child.

“He started punching and kicking me. He even brought a wire and hit me with it on my back,” Abu Raida told DCI-Palestine.

Here is Abu Raida’s complete account of the abuse:

“I was crying and begging him to stop, but he did not show any mercy. He kept hitting me over and over. He poured a glass of water on my trousers. He insulted me using very dirty words that I am familiar with, and other dirty words that I have never heard of. Even soldiers who did not speak Arabic insulted me as well. They threatened to ‘shove a stick into my … bottom’ if I did not tell them where the tunnels were.”

Abu Raida described a similar experience that occurred the following day. After being forced to enter two more houses “to search for tunnels” and finding none, he was again scolded by one of the soldiers and placed in a room by himself. “While I was in the room, I found a notebook and a pen inside a bag… so I decided to write my will and leave it for my family,” Abu Raida said in the affidavit.

DCI-Palestine provided an English translation of Abu Raida’s letter (pictured below in Arabic):

“I spent Friday, 25 July with Israel occupation soldiers who were locking me in this room. I do not know whether I am going to live or they would kill me. I do not know anything about what would happen next to me. I am writing this letter hoping someone would find it and inform my family about it. In case I die or get arrested, please send my greetings to my family. Ahmad Jamal Abu Raida.” 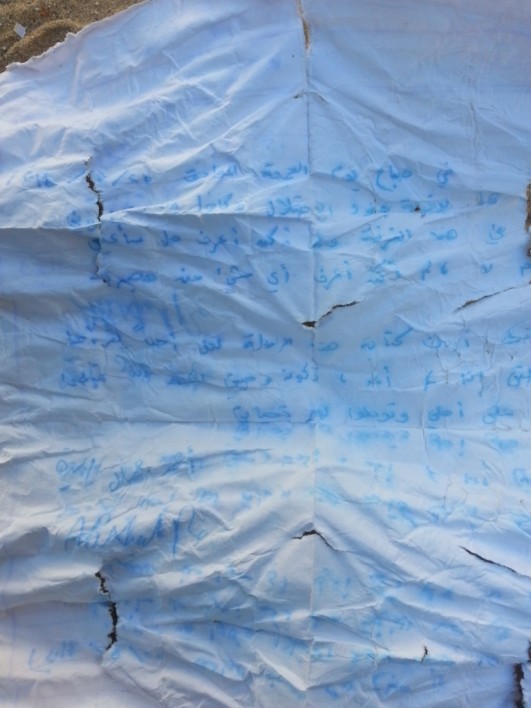 The original letter written by Ahmad Abu Raida while detained by Israeli soldiers and used as a human shield in Gaza for five days from July 23, 2014 in Khuza’a, Gaza Strip. (photo: DCI-Palestine)

An ‘offer’ to spy

On July 26, according to the affidavit, Abu Raida was ordered to climb down into a hole and dig for tunnels. When he replied that the hole was the beginnings of “a sanitation well,” the captain “took off his helmet and hit me with it on my head,” said Abu Raida.

After complaining that he was feeling ill and could not dig anymore, Abu Raida was taken to a relative’s house, where soldiers again interrogated him about alleged Hamas tunnels:

“I told them I did not know anything about the tunnels, so they would slap me across the face or on my neck, or punch me or kick me whenever they wanted,” Abu Raida said.

After a night of repeated questioning and physical abuse – including being forced “to sit and stand up again more than 60 times” – Abu Raida was asked the following morning if he would “work for them as a spy.” After he refused, a soldier “pointed to the police dogs they had with them and said, ‘You see that dog, it’s better than you.'”

According to the affidavit, at around 1 p.m. on July 27, the fifth day of Abu Raida’s captivity, the soldiers allowed him to put his clothes back on and released him.

“The Israeli military has consistently accused Hamas of using civilians – particularly children – as human shields, but this incident represents a clear case of their soldiers forcing a child to directly assist in military operations,” Rifat Kassis, executive director of DCI-Palestine, said in a statement the group released on the case.

Abu Raida is now with his family in nearby Khan Younis, where Khuza’a residents have sought shelter from Israeli tank shelling. The shelling, according to the United Nations, has displaced nearly half a million Palestinians and destroyed tens of thousands of homes along Gaza’s border with Israel. Abu Raida told +972 that his family’s home had sustained damage “on the outside and the inside,” with bullet holes evident on the walls.

DCI-Palestine advocacy officer Brad Parker added that the military’s actions could constitute a war crime: “War crimes are defined as violations of the laws and customs of war, or violations of international humanitarian law, and include willful killing, torture, attacking civilians or civilian structures, and using civilians as human shields, among other offenses. While Israel is not a signatory to the Rome Statute of the International Criminal Court, Israeli forces are obligated to follow international humanitarian law.”

Israel last week barred Human Rights Watch and Amnesty International researchers from entering Gaza. In a statement released Wednesday, Amnesty International’s director of research and crisis response, Anne Fitzgerald, said: “The victims’ and the public’s right to know about what happened during the recent hostilities requires the Israeli authorities to ensure full transparency about their actions and to refrain from hindering independent and impartial research into all alleged violations.”

+972 has approached the IDF spokesperson for comment, which will be added once it is received.