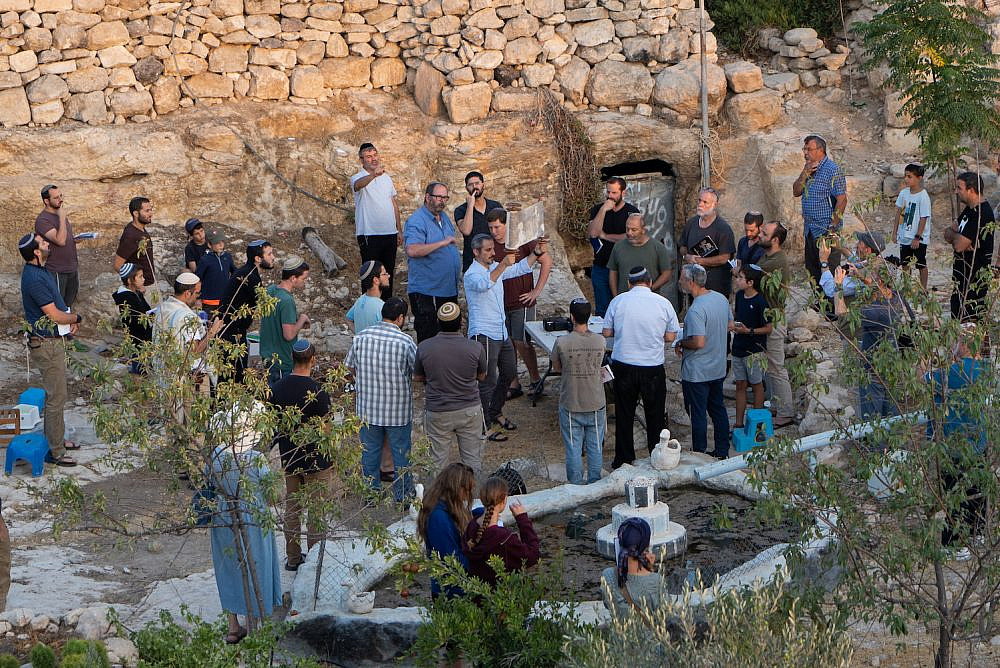 Settlers, under the guise of Israeli security forces, hold a Tisha B'av prayer service in the middle of the Palestinian village of A-Tuwani, South Hebron Hills, August 7, 2022. (Omri Eran-Vardi)

Earlier this month, Israeli settlers published an invitation on social media to a prayer service for the Jewish fasting day of Tisha B’Av. The service was to be held at 5 a.m. on August 7 in the yard of a Palestinian home in A-Tuwani, a village in the region of Masafer Yatta in the occupied West Bank. The event was organized in cooperation with the Israeli security forces, who turned our lives into hell that night in order to ensure the settlers would enter the village and hold prayers undisturbed right next to Palestinian homes on private Palestinian land.

The settlers claimed that in the plot of land they took over once stood a synagogue — an argument the army bought seemingly without question. Knowing about the event, most residents of A-Tuwani did not sleep the night before. Activists from the neighboring villages, along with Israeli and international activists, were also present that night, preparing to document and protest both the settlers’ and military’s actions.

At 11 p.m. that night, Israeli occupation forces raided the home of B’Tselem field researcher Nasser Nawaja in his village of Susiya. At the time, Nasser was with us in A-Tuwani to document whatever would happen the next morning. When his family called him to report that their home was being raided, we immediately rushed with him to his home.

When we arrived, we found two army patrols in front of his home, as soldiers searched inside, roaming outside with torches and waking up the whole family. When they asked for Nasser’s name, they immediately handcuffed him, put him inside the military vehicle, and drove away. The only thing the commander said to Nasser was: “You are detained for an intelligence investigation.” The next day, after the settlers finished their planned invasion in A-Tuwani, he was released. 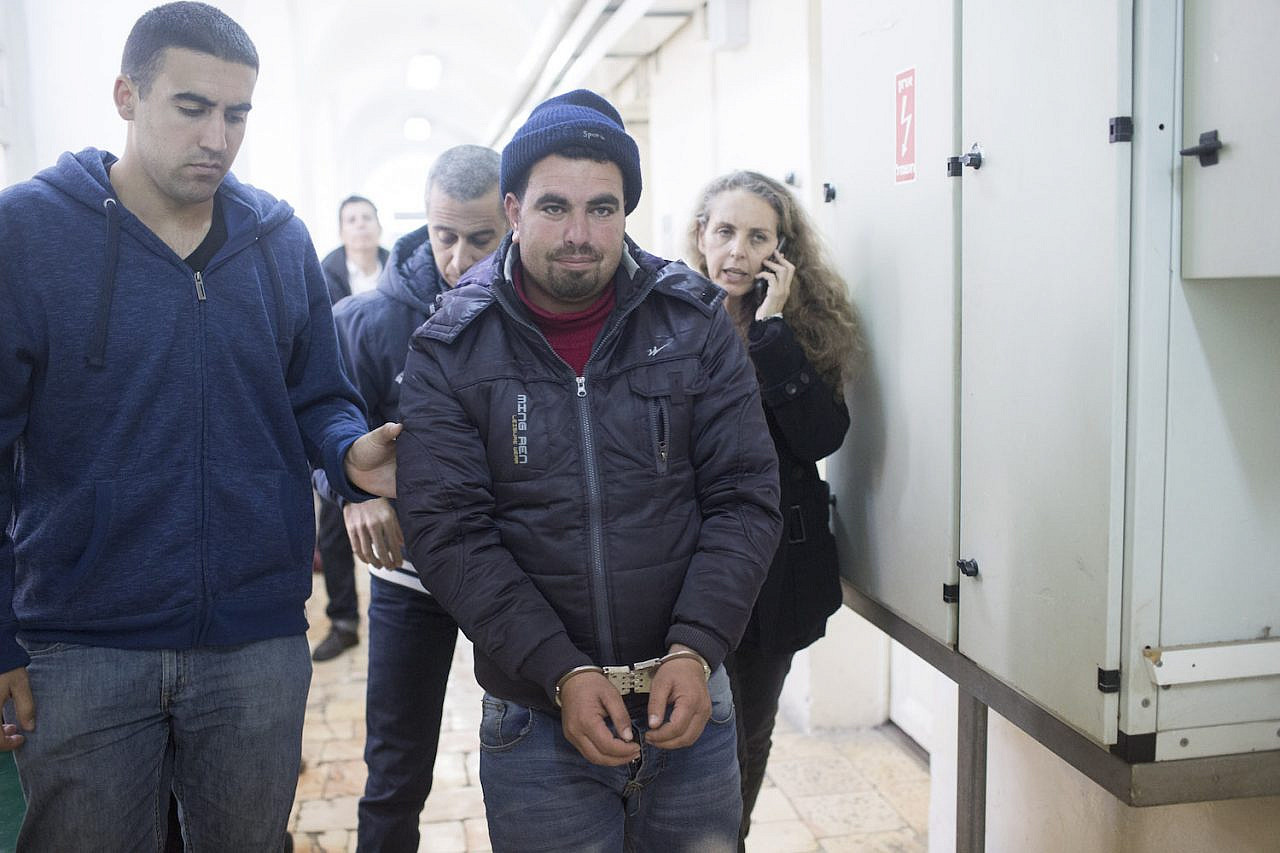 “The army took me to a military base in the settlement of Otniel in the South Hebron Hills,” Nasser told us. “They put me in a room until about 11 am; I spent almost 12 hours handcuffed and blindfolded before I was brought to the intelligence investigation center in [the settlement] Gush Etzion.”

Nasser explained that different soldiers guarded him in shifts as he waited.  “Every few minutes, a soldier came and clapped his hands close to my face to irritate me. Another soldier threw two pebbles at me from the window. I am sure that all of this was an attempt to use psychological pressure against me.”

After the long and harrowing hours of waiting, Nasser was taken to the Israeli intelligence investigation center, where an officer told him, “There are a few things we must talk about before you are released. You are present wherever there is activity, and you influence the rest of the active youth in the area.” Nasser responded that his work naturally requires him to be in places to document human rights violations.

It is no coincidence that the army arrested a B’Tselem researcher right before the planned entry of settlers into a Palestinian village. The way the arrest was carried out made that clear: usually, in investigations of human rights and anti-occupation activists, an Israeli intelligence officer summons the person for an interrogation without the army’s intervention. The summons requires the person to report to the investigation center on their own, as had recently happened to Nasser himself just last March. In this case, however, it seems that the army wanted to act swiftly to prevent Nasser from documenting the settlers’ invasion of A-Tuwani, and so decided to detain him just a few hours before the event.

Liked caged animals in a zoo

After Nasser was taken away, we immediately went back to A-Tuwani because we knew that the military would likely set up a flying checkpoint at the entrance of the village, preventing anyone from entering or exiting.

Indeed, two hours before the settlers were due to arrive, dozens of army and border police cars were distributed along the route from the entrance of the village all the way to the garden in front of the family’s home where the settlers planned to meet. The soldiers did not allow any Palestinians from the village to enter or exit those areas; even workers in the village who had to head for the checkpoint early in the morning in order to work in Israel were prevented from leaving.

Soon, two buses of settlers entered the village accompanied by military patrols. When the settlers got off the bus, the army forced all the Palestinians in the area to remain inside the homes, away from the garden where the settlers wanted to pray; even journalists and activists were prohibited from approaching to document. A group of soldiers stood before the front door of each nearby house, threatening families any time they tried to step outside. Snipers also used the roofs of some of the homes as lookout spots. 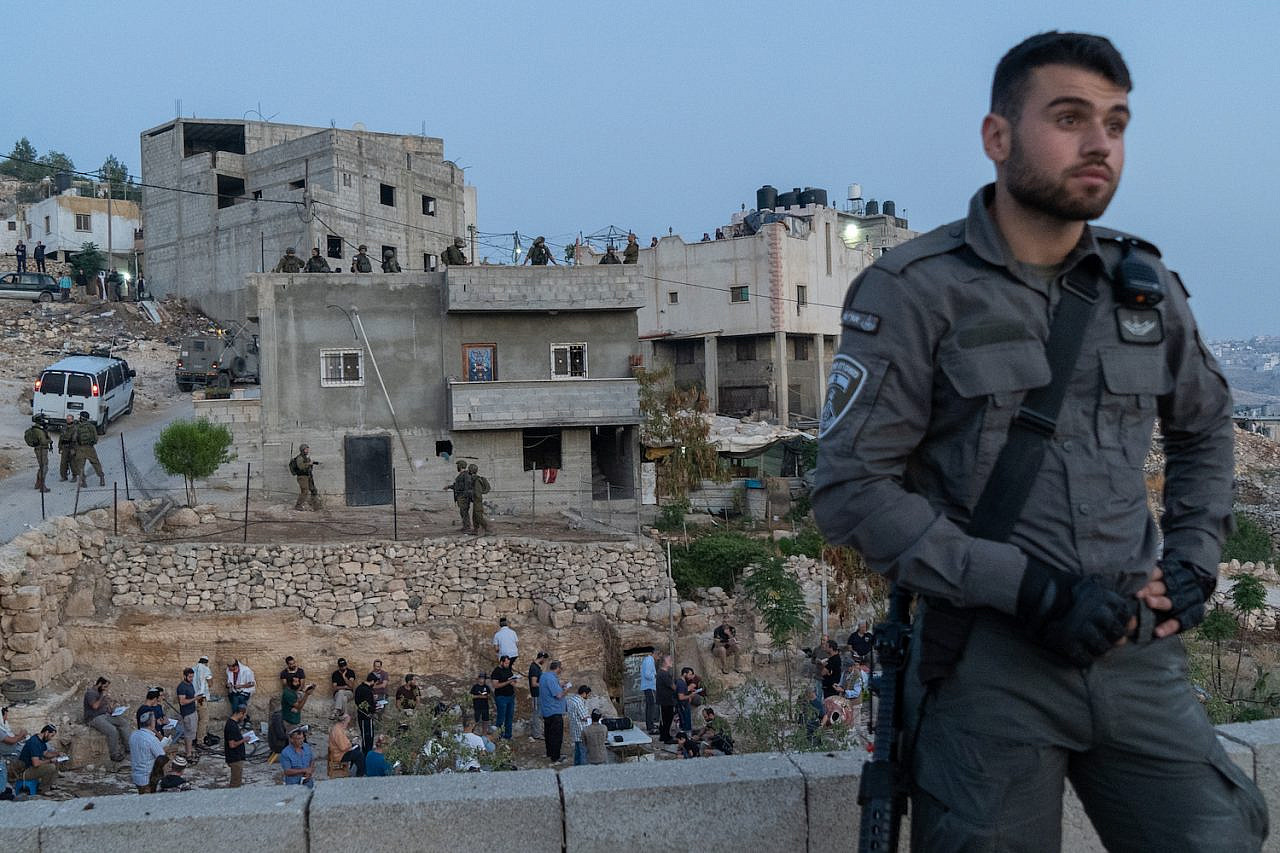 Settlers, under the guise of Israeli security forces, hold a Tisha B’av prayer service in the middle of the Palestinian village of A-Tuwani, South Hebron Hills, August 7, 2022. (Omri Eran-Vardi)

The settlers stayed in the village for almost an hour and a half. They entered and exited the village freely, and their children happily played in the Palestinian family’s garden, jumping, dancing, hugging each other, and taking selfies with the soldiers. The settlers’ children looked around at the nearby houses, while the Palestinian children from those very houses were forcibly shut inside – as if they were caged animals in a zoo – while soldiers aimed their guns at them. I saw one Border Police officer chase and scream at a three-year-old Palestinian boy to force him back inside his home after he tried to go out to the street.

It sometimes feels as if the Israeli authorities never have enough policies to enforce against us. They are never satisfied by how much they can displace us from our homes in Masafer Yatta. They have so many pretenses for stealing our land – from declaring occupied territory as “state land” to, quite popularly in our area, declaring a need for a “firing zone,” one of which has swallowed my own village.

Now, however, it seems that Israel is increasingly turning to archaeology and religion as a tool in the service of forced Palestinian displacement. Seeing the settler prayer service in A-Tuwani, I felt nervous that the same fate would befall the village as had befallen its neighbor Susiya, where Palestinians were forcibly displaced in the 1980s under the pretext of the presence of Jewish archaeological findings in the area. The residents of Susiya now live in a new location down the road from their previous homes, so that Israeli settlers can have their religious site. The narrative of “antiquities” is quickly turned into a reality of dispossession.

Palestinians are the only victims of this reality. Since the start of this year alone, the Israeli Civil Administration has already issued demolition orders against five houses in A-Tuwani, claiming that they are built on archaeological sites. “History,” of course, is not something that settlers will ever lose their homes over; it is manipulated solely to take over Palestinian land and homes. It is yet another weapon in our ethnic cleansing.