Hana Shalabi, a Palestinian woman currently being held in administrative detention by Israel, entered the 15th day of her hunger strike today in protest of the maltreatment she suffered during her arrest. Her elderly parents and two Palestinian prisoners have joined her hunger strike. 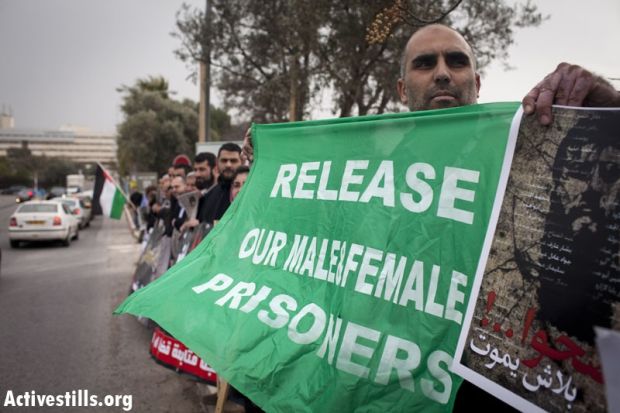 According to Addameer Prisoner Support and Human Rights Association, Israeli authorities detained Shalabi, from the village of Burqin near Jenin, on February 16. She was allegedly beaten during her arrest—as was her brother when he tried to stop an Israeli soldier from hitting her—and began the hunger strike on the same day in protest.

Shalabi was released from administrative detention in October 2011 during the swap that saw Israeli soldier Gilad Schalit freed in exchange for over 1000 Palestinian prisoners. She had been held by Israel since September of 2009, without trial or charges, under the pretense that she posed a security threat and that she was planning a terror attack.

Hana was held in solitary confinement at Kishon Detention Center for eight consecutive days, in a cell measuring six square meters that contained no windows or natural sunlight. The cell contained only a mattress and a bathroom, and was reportedly very dirty. Hana was subjected to exhausting interrogation sessions every day, which lasted from 10:00 a.m. until the late evening hours. The lack of natural sunlight during this period caused her to lose all sense of time and she was often unable to determine whether it was night or day. As this period of isolation and disorientation coincided with the holy month of Ramadan, Hana was unable to monitor time in order to respect her fast. As a result, she decided not to eat at all, refusing meals and drinking water only during the entire eight day period.

Hana was also subjected to sexual harassment and physical violence during her interrogation. Hana told Addameer attorney Safa Abdo of an incident that occurred at end of an interrogation session, in which she did not confess to committing a crime, as her interrogators had expected. In a move that Addameer contends was an effort to provoke Hana, one of the Israeli interrogators called Hana “habibti” (Arabic for “darling”) in a provocative manner. Feeling humiliated and angry at the interrogator’s offensive use of an intimate term, Hana started shouting at him. The interrogators responded by slapping her on her face and beating her on her arms and hands. The guards then took her back to her cell where they tied her to the bed frame and continued humiliating her by taking pictures of her laying in that position.

Addameer filed a complaint regarding these violations and only received a reply two years later from the district prosecution in Haifa that they were closing the file for “lack of evidence,” without informing her lawyers what process had taken place to investigate the complaint. Most complaints of this kind are similarly closed due to the unclear claim of “lack of evidence,” showing a consistent policy that they are not taken seriously by the Israeli courts.

Maan News Agency reports that two Islamic Jihad members—Bilal Dyab and Thaer Halahla—began hunger strikes today in support of Shalabi and that they will continue to refuse food as long as Israel continues holding Palestinians in administrative detention.

A judge at the Ofer military court will hear Shalabi’s case on March 3.

The 66-day hunger strike of Palestinian prisoner Khader Adnan recently brought international attention to Israel’s use of administrative detention, the policy of holding Palestinians without charges or trial on the basis of secret “evidence” that is not revealed to the detainee or his or her attorney.