Palestinian public-sector workers receive only partial salaries as Israel punishes the Abbas administration for its ICC bid by withholding tax funds it collects on the PA’s behalf. 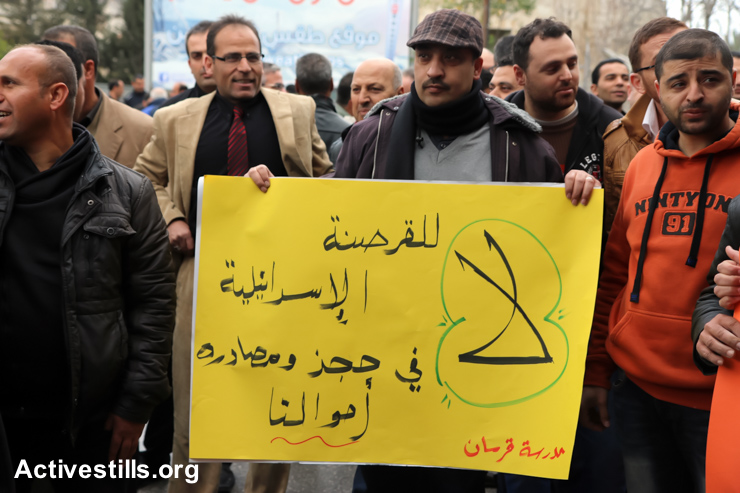 A Palestinian teacher holds a sign that reads: “Freezing our money is Israeli piracy,” during a protest in front of the Ministry of Education in the West Bank city of Nablus, February 8, 2015. (photo: Ahmad Al-Bazz/Activestills.org)

Palestinian public-sector workers finally received part of their monthly salaries from banks in West Bank cities and towns on Monday. The Palestinian Authority announced on Sunday that it would pay only 60 percent of January salaries, except workers who take salaries less than NIS 2,000 per month. In mid-January, workers had also received 60 percent of December salaries. When the remaining portion of the salaries will be paid is still unknown, as is the situation for the coming months.

The PA is now facing a financial crisis following the Israeli authorities’ January 3 decision to freeze the transfer of tax funds it collects on behalf of the Palestinian Authority. The punitive action came in response to Mahmoud Abbas’ move to join the International Criminal Court to pursue war-crimes charges against Israel. PA salaries are estimated to total around $200 million per month, $120 million of which comes from the taxes collected by Israel. 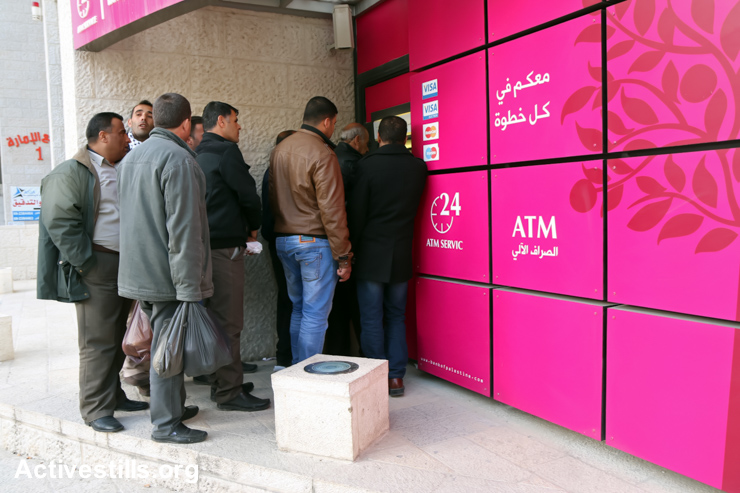 Palestinian public-sector workers stand in line for their salaries in Nablus, West Bank, February 9, 2015. The PA announced it will pay only 60% of January’s salaries. (photo: Ahmad Al-Bazz/Activestills.org)

Standing outside an ATM machine, the headmaster of the Zaita village school, said: “60 percent of my salary is not enough for my family. And we must not forget the bank loans deduction.” Another woman screamed: “207 shekels is all I received!”

Many Palestinian families have significant bank loans. Banks often deduct their monthly payments automatically. Because of that, many of workers were surprised when were able to withdraw only NIS 500 or NIS 700 of their paychecks from the ATM machines. At the same time, payments for prisoners and the families of those killed or injured by Israeli forces — usually paid by the PA — were not available.

On February 8, Palestinian teachers participated in a protest in front of the Ministry of Education in the West Bank city of Nablus calling for an immediate reaction against, in their words, “Israeli piracy” of tax money. Palestinians criticized the PA lack of emergency reserves, resulting in a collapse in the first month. The head of the teachers union in Nablus, Isam Dababseh, denounced the Israeli measure. He added: “The PA way of dealing with the crisis is not logical. Low-income workers should have their entire salaries, while the deduction must only be on people making more than NIS 10,000.” 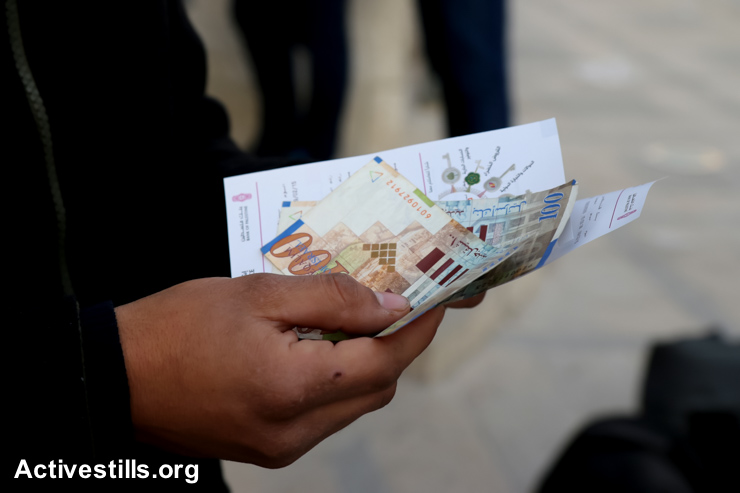 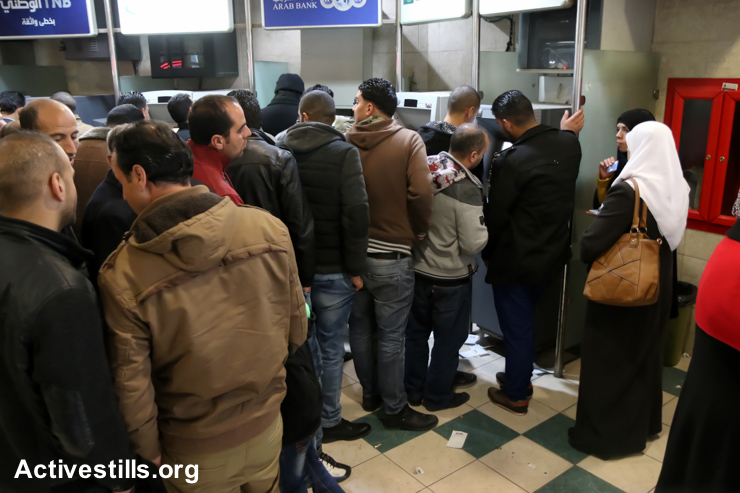 Palestinian public-sector workers stand in line for their salaries in Nablus, West Bank, February 9, 2015. The PA announced it will pay only 60% of January’s salaries. (photo: Ahmad Al-Bazz/Activestills.org)

Related:
UN aid agency to Gazans: Sorry, but there’s no money
The hard fact is that Israeli repression works