In the last 24 hours, two near-fatal attacks were committed against Palestinians, one a suspected terror attack, the other a suspected attempted lynch – both allegedly committed by Israeli Jews. Haaretz was the only website (both Hebrew and English) to put the suspected lynch as a top story, while all the other major news sites lead with Iran’s incitement against Israel.

The first incident, a firebomb thrown on a Palestinian taxi driving north near the settlement of Bat Ayin towards Gush Etzion on Thursday, has yet to be confirmed as a terror attack. All six passengers in the car, members of the Hassan family from Nahalin, were injured – one seriously – reportedly suffering first-degree burns. According to Haaretz, the police said they found another firebomb in the area and were looking into the victims’ claim it was a “Jewish terror attack,” but had not yet ruled out other possibilities.

In another incident late Thursday night, which has already been called a “lynch” by an eyewitness who was there, three Palestinian youth were attacked and severely beaten up by “dozens” of Jewish youth in Zion Square, in the center of West Jerusalem. The woman who witnessed the whole thing posted her testimony and devastated thoughts on her Facebook page, which was partially translated by Haaretz. Here is the full translation:

Its late at night, and I can’t sleep. My eyes are full of tears for a good few hours now and my stomach is turning inside out with the question of the loss of humanity, the image of God in mankind, a loss that I am not willing to accept. But today I saw a lynch with my own eyes, in Zion Square, the center of the city of Jerusalem. I arrived with the staff of “Elem” [NGO that works with children at risk] to Zion Square as we normally do at this hour to volunteer, and barely half an hour went by when I heard screams of ‘A Jew is a good soul and Arab is a son of a bitch,’ shouted loudly and dozens (!!) of youths ran and gathered and started to really beat to death three Arab youths who were walking quietly in the Ben Yehuda street.

When one of the Palestinian youths fell to the floor, the youths continued to hit him in the head, he lost consciousness, his eyes rolled, his head at an angle started to twitch, and then those who were kicking him fled and the rest gathered in a circle around, with some still shouting with hate in their eyes…

When two of our volunteers went into the circle, they tried to perform CPR the mass of youths standing around started to say resentfully that we are resuscitating an Arab, and when they passed near us and saw that the rest of the volunteers were shocked, they asked why we were so in shock, he is an Arab. When we returned to the area after some time had passed, and the site was marked as a murder scene, and police were there with the cousin of the victim who tried to reenact what happened, two youths stood there who did not understand why we wanted to give a bottle of water to the cousin of the victim who was transferred to hospital in critical condition, he is an Arab, and they need don’t need to walk around in the center of the city, and they deserve it, because this way they will finally be afraid.

Children aged 15-18 are killing a child their own age with their own hands. Their own hands. Children who’s hearts were unmoved when they beat to death a boy their age who lay writhing on the floor. The picture has not been struck from my eyes and I can still hear the voices and the feeling of helplessness and the question, what happened to us and what is happening to our kids? And the most important – If and how can we still change it?

After many comments and rumors that the Palestinians had somehow started it or attacked the Jewish youth first, the witness wrote: “I saw with my own eyes that they didn’t attack anyone, and I heard with own ears the teens running just to ‘find an Arab to beat up.'”

One of the Palestinians is in the intensive care unit at Hadassah Hospital Ein Karem, after being beaten so badly that he lost consciousness and had to be revived by medics after losing a pulse. A picture of a different Palestinian who was injured by Jews several months ago in Jerusalem was uploaded by a right-wing settler site called “the Jewish Voice” and has been circulating as a visual on their Facebook page. An Israeli named Amihay Hillel wrote a comment on the Facebook photo commending the violent act and essentially admitting some kind of passive support, if not active participation, in the attack by stating “How wonderful…I was lucky enough to be present:” 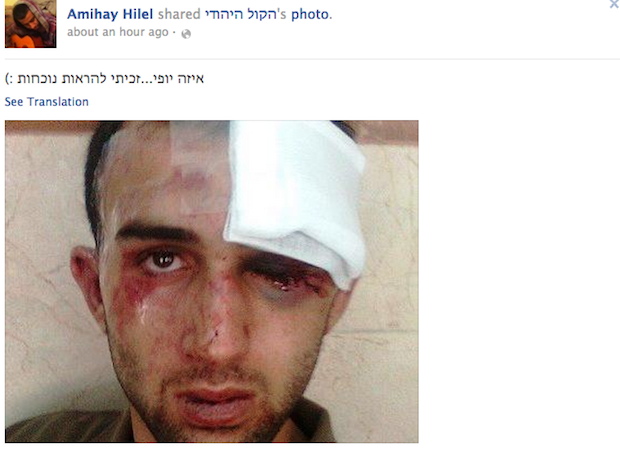 Despite the severity of this incident and that fact that it happened right in the center of West Jerusalem, it has not yet made it to the lead of any of Israeli mainstream media outlets – except Haaretz – and on some websites is completely buried.  Ynetnews decided to report on it as a “brawl” that “broke out” between Arabs and Jews, despite the fact that they have absolutely zero evidence the Palestinian victims did anything to provoke or react in any way and even admit “the circumstances surrounding the incident remain unclear.”
This incident comes just two days after a Palestinian man was violently dragged by off-duty soldiers in Hebron.