Over 150 people hold a joint feast in honor of the Muslim and Jewish new years in the neighborhood of Sheikh Jarrah, where Israel is working tirelessly to replace Palestinians with settlers. 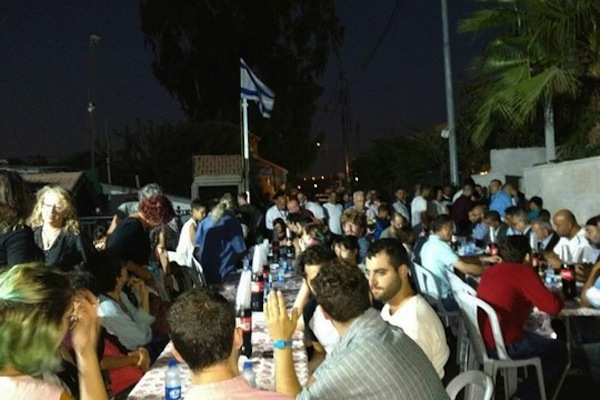 Over 150 Palestinians and Jews mark both the Jewish and Muslim New Years with an interfaith dinner in the East Jerusalem neighborhood of Sheikh Jarrah, September 21, 2017. (Orly Noy)

This year, the Jewish New Year lined up with the Muslim New Year, an event that takes place once every 33 years. In honor of the double-holiday, the residents of the East Jerusalem neighborhood of Sheikh Jarrah decided to hold a joint new year’s feast for Jews and Muslims outside the Shamanseh family home, from which they were evicted by settlers two weeks ago.

The struggle over the fate of the home may have come to an end for now, but the struggle against Israel’s policies of dispossession in the neighborhood, which have reared their head after a respite and now threaten dozens of families in Sheikh Jarrah, continues unabated. Palestinian activists and residents continue to arrive at the Shamanseh home every evening, making clear they are not going anywhere. [Read more on the evictions in Sheikh Jarrah here].

When we reached the home, the first thing we heard was the Muslim call to prayer and an Israeli flag that had been hung on the roof. The flag felt so foreign that for a moment it seemed its presence served to remind the settlers that they were there due to the good graces of the Israeli government. With the muezzin blaring in the background and the Arabic in the street, it was easy to forget that.

‘We will cry together and protect one another’

As prayers came to an end, the preparations outside the Shamanseh home were at their peak: dozens of people setting up tables, spreading tablecloths, organizing chairs, while greeting each other with hugs, kisses, and the traditional new years greeting in Hebrew and Arabic. I quickly realized that the vegan dish we brought was unnecessary; the hosts from the neighborhood made sure to include plenty of vegan options.

People continued to stream in, both Jews and Palestinians. Finally we sat around the table, 150 of us, in one of the most memorable events of the last few years. I spoke to a man, who according to his appearance was a devout Muslim, who told me he came from Shuafat refugee camp to take part in the event. “Although we have our own problems there,” he told me, “but when Jews and Arabs do something so nice together, we have to come.”

Almost surprisingly, there was no police presence, although the police had already made itself known when it banned a left-wing Jewish activist from the neighborhood over “suspicions of conspiracy to commit a crime,” no less. In a status published on Facebook, the activist describes the strange summons he received from the police, the bizarre conversation that took place at the station, and the infuriating 15-day ban (the activist was also forbidden from joining any demonstration in the country for a period of five days). Anyone who knows him knows just how much his presence was missed. Perhaps this is what Muhammad Shamanseh meant when he wished us a happy new year and said: “May we always remain hand in hand and shoulder to shoulder, that the entire world sees that we are standing together, and if necessary we will cry together and protect one another.”

The settlers never once left the home. Those who proudly entered the Shamanseh’s home three weeks ago were nowhere to be found. Maybe they weren’t even home at the time, or perhaps they hid behind locked doors, listening to the Arab-Jewish party outside — a reminder of the days in which Jews and Arabs lived here side by side, and did not make a mockery of themselves by expelling children and the elderly from their homes.

It is likely that during their Rosh Hashanah dinner, those settlers raised a toast to their latest victory in Sheikh Jarrah. That task is not so challenging when the state itself takes an active role in dispossession. But those who were at that joint new year’s dinner knows that as long as dispossession continues, so does the struggle.