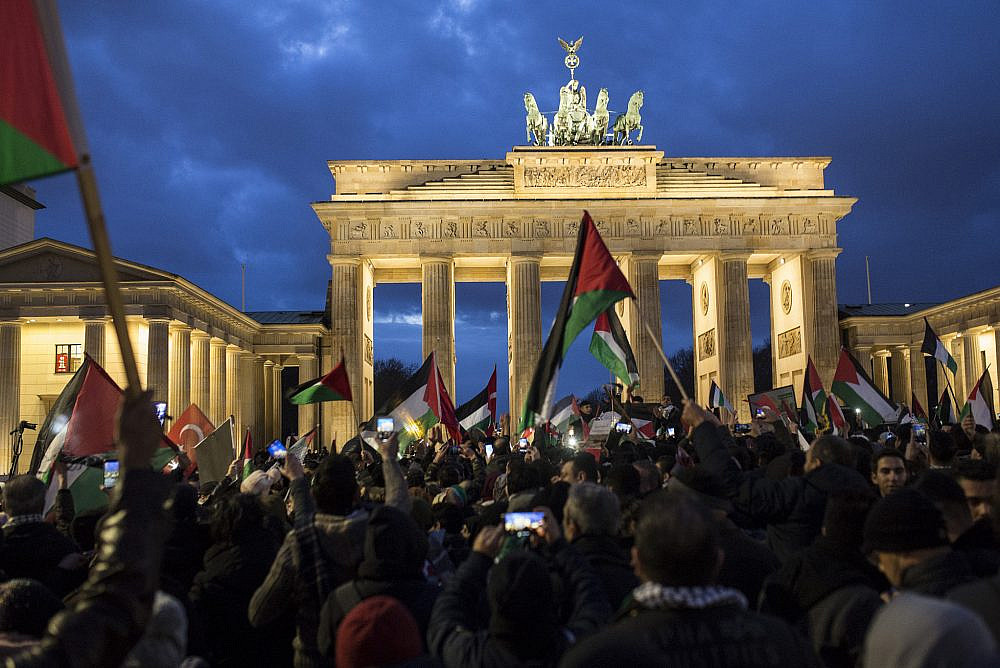 Hundreds of Palestinians and supporters protest in front of the U.S. embassy against President Trump’s decision to recognize Jerusalem as the capital of Israel, Berlin, Germany, December 8, 2017. (Anne Paq/Activestills)

Berlin is believed to be home to the largest Palestinian population outside the Middle East, with much of the community based in the city’s Neukölln district — known colloquially as the “Arab Street.” Although just a few train stops away from the German capital’s iconic center, Neukölln’s Sonnenallee (“Sun Alley”) feels a long way from the atmosphere of typical German cities and villages — home, instead, to Middle Eastern grocery stores, halal butchers and restaurants, cafes with backgammon-playing tea drinkers, and frequent Arabic shop signs.

Yet there is a more complicated reality behind this apparent portrait of multiculturalism. For one thing, there is no decisive figure for the number of Palestinians in Germany — because, according to immigration expert Ralph Ghadban, there is no such thing as a “Palestinian” nationality in official statistics. Instead, Palestinians are categorized as “stateless” or “undetermined” (German: “ungeklärt”) people — even those from the occupied territories who hold Palestinian Authority documents.

Moreover, Neukölln is considered one of the poorest and most structurally unequal neighborhoods in Berlin: 45 percent of children growing up in the district have parents who are recipients of social welfare, and the average income per adult only just clears the official poverty line. And the reason for this, according to experts and activists, goes back to the days of the Lebanese civil war, which began in 1975 and which drove almost one million people — including many Palestinians who were already refugees — out of the country.

Unlike the Palestinians who came to Germany in the 1960s to study, the Palestinian refugees who fled the Lebanese civil war became especially vulnerable, as the German government did not recognize them as political refugees. Under German law, a refugee is a person who is being persecuted by their government for political reasons.

Less than 2 percent of the Palestinian asylum seeker population who arrived from Lebanon won refugee status, as the German authorities wanted to send them back; Lebanon however, did not sign a return agreement. This led to the designation of these asylum seekers as holding “Duldungsstatus,” or toleration status, which is simply a temporary postponement of their deportation. 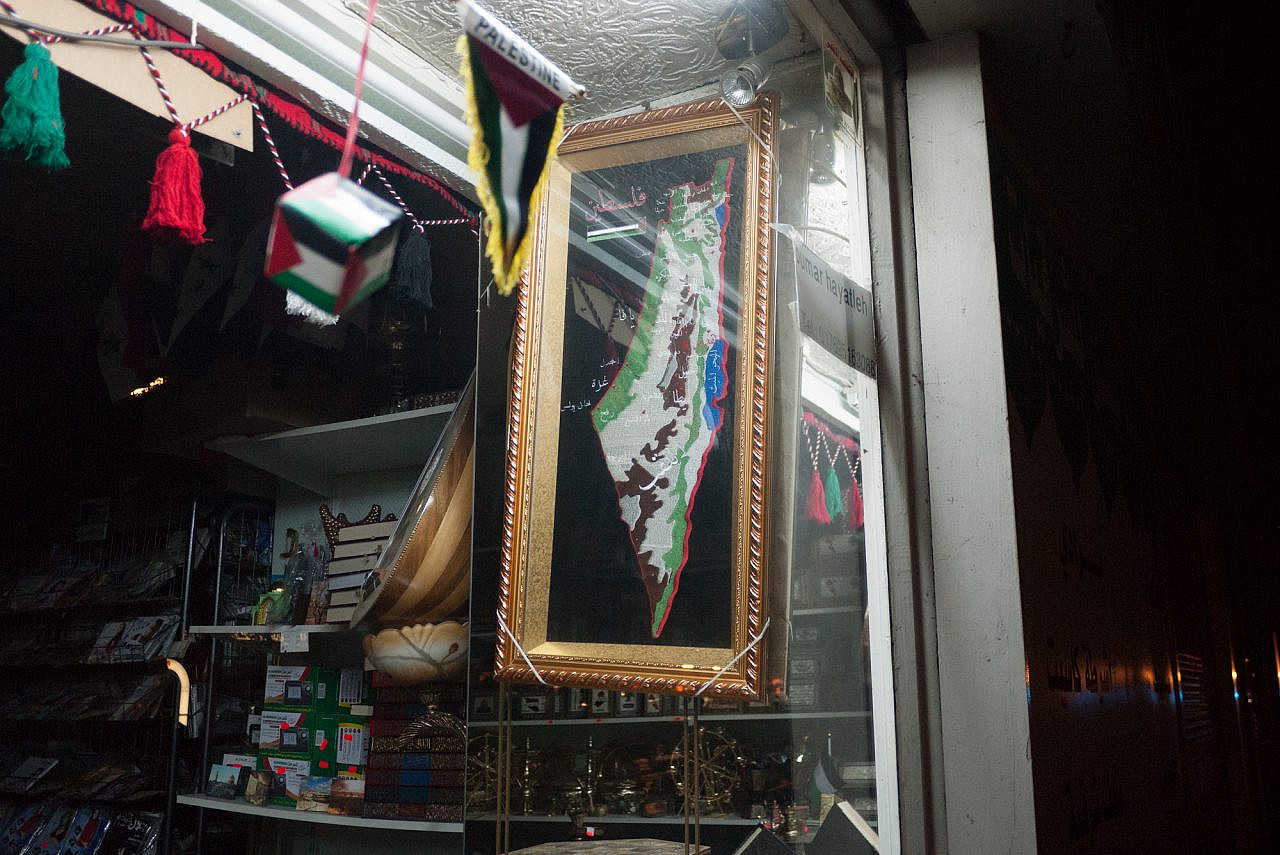 For the Palestinian community in Germany, living in the shadow of this policy has been accompanied by the harsh realities of unemployment, crime, income inequality, and even failed integration — the result of political disinterest, economic abandonment and forced dependency on a welfare state that is socially and politically disinterested in them. Moreover, the combination of being denied the right to higher education and vocational training, and the steady reduction of social benefits over the years, has driven some to break the law — whether by opening businesses without legal licenses, or dealing drugs.

Equally, the “constant fear” of deportation has compelled some of these asylum seekers to leave “their suitcases packed in one corner of the room,” Swiss-Palestinian academic Sarah El Bulbeisi tells +972 Magazine. Moreover, rather than allotting them even limited rights such as a state ID, the ability to vote, or being able to apply for social welfare, this status merely territorially binds them to a neighborhood such as Neukölln, which they are not allowed to leave — even as they fear forced departure.

Bulbeisi, who has written about the “tabooization” of the Palestinian experience in Switzerland and Germany, explains that the repressive German policies enacted against the Palestinians who came here mimicked the humiliation they faced back in Lebanese refugee camps and under Israeli occupation.

“What I tried to show in my book was that there was this erosion of life amongst the Palestinian community here in Germany,” Bulbeisi told +972. “Palestinians as human beings are unrecognized, and there exists a moral occupation through the European imagination. The systemic violence of ethnic cleansing by the Israeli state was continued by the symbolic violence they experienced in their German and Swiss refugee societies.”

Bulbeisi stresses that the Palestinian collective memory of the Nakba must include the exiles they faced beyond their original expulsion from Palestine as well. “The Nakba currently has a narrow definition of just the expulsion that took place in 1948,” Bulbeisi explains. “But the Palestinians who came as political refugees from Lebanon, and even those who came to study in the ‘60s and could not return, are all included in this discursive form of expulsion.

“The definition of the Nakba is continuous,” she continues. “It goes from a narrow definition to a much more complex structure that defines the traumatic existence of Palestinians here in Germany who are unable to return to their country of origin.”

Belonging and the ‘War on Terror’

Mona Abdelkader, a second generation German Palestinian with refugee parents, also reflects on the tenuousness of Palestinian identity in Germany.

“Although I was born here, I realized how contested my identity as a Palestinian is once my parents tried to enroll me in school,” she recalls. “My passport indicated I was stateless, and the schools did not understand how that could be possible.” Abdelkader’s nationality was, in the end, recorded as Lebanese — “erasing that I was in fact Palestinian and the daughter of refugee parents,” she says. “You can’t be Palestinian here, especially if you’re a refugee.” 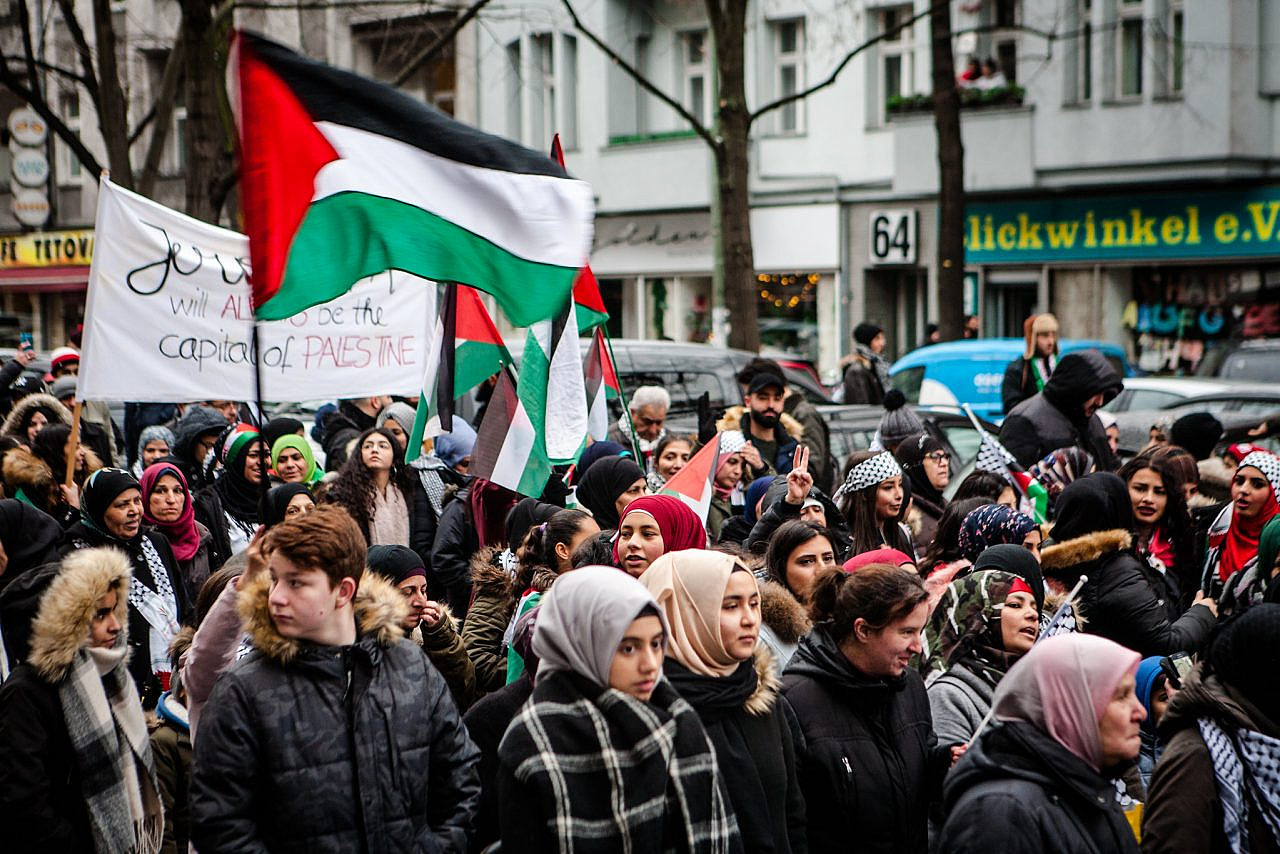 A 2005 report by researcher Monika Kadur and journalist Fadia Foda examined the group dynamics of this struggle over identity, explaining how a community like Neukölln’s “Arab Street” became so concentrated and isolated from the rest of German society.

“The only Germans [the Palestinian community] had regular contact with were Federal Border Police, immigration authorities and social offices,” the report states. This reality, combined with the “insecure residency situation,” has led to the parallel development of “‘ghettos of immigrants with their own infrastructure” in order to make diaspora life more comfortable, and marginalization around “living conditions, social status, relation to the host society and the position of women.”

To some, this was good news, as it finally gave Palestinian immigrants and refugees some sense of security and relief from the perpetual fear of inevitable deportation. Yet that legal victory was swiftly followed by the German state reassessing, in the wake the September 11 terrorist attacks and the start of the so-called “War on Terror,” what belonging looked like — and where Palestinians fit into that picture.

Bulbeisi explains just how much the figure of the Palestinian shifted with 9/11. “In the ‘70s and ‘80s, Palestinian activism was heavily influenced by Cold War politics,” she says. “For Germans, [Palestinians] were perceived as these ‘terrorist leftists.’ Now, with the global ‘War on Terror,’ they have been Islamized, and are seen instead as this ‘terrorist Muslim’ figure.”

Tareq, a social worker in Berlin originally from the Zaatar refugee camp in Lebanon who asked not to share his last name because of the sensitive nature of his job, tells +972 that the post-9/11 environment eroded, at least temporarily, Palestinian activism in Germany.

“The situation was different [in the past],” he says. “At our educational institutions we held events, protests where hundreds would show up, and we educated our communities. We thought of ourselves as only Palestinian and we did so unapologetically — why should we give up who we are for a state who only disrespected and discriminated against us?

“That all changed with 9/11,” he continues. “Being a Palestinian now meant that you’re a criminal, and people got scared. Any action we wanted to do was squashed, we were surveilled and demonized for simple actions.”

The “terrorist” framing was, explains German-Palestinian academic Anna-Esther Younes in a recent article, subsequently attached to the perception of Muslims — and in particular Palestinians — as the chief perpetrators of antisemitism in German society, a template underlined by the publication of reports in 2002 and 2003 by government-funded research institutes that foregrounded the figure of the “Muslim anti-Semite” who imported Islamism, sexism, homophobia, and antisemitism into German society.

The German government responded to these reports by providing “political education” for immigrants in Neukölln and Kreuzberg, a Berlin district with a large Turkish community. These programs targeted Muslim youth — predominantly Palestinians, followed by Kurds inside schools in Berlin as well as community centers and mosques — to prevent radicalization, and offered to take them on trips to Israel to tackle antisemitic stereotypes. 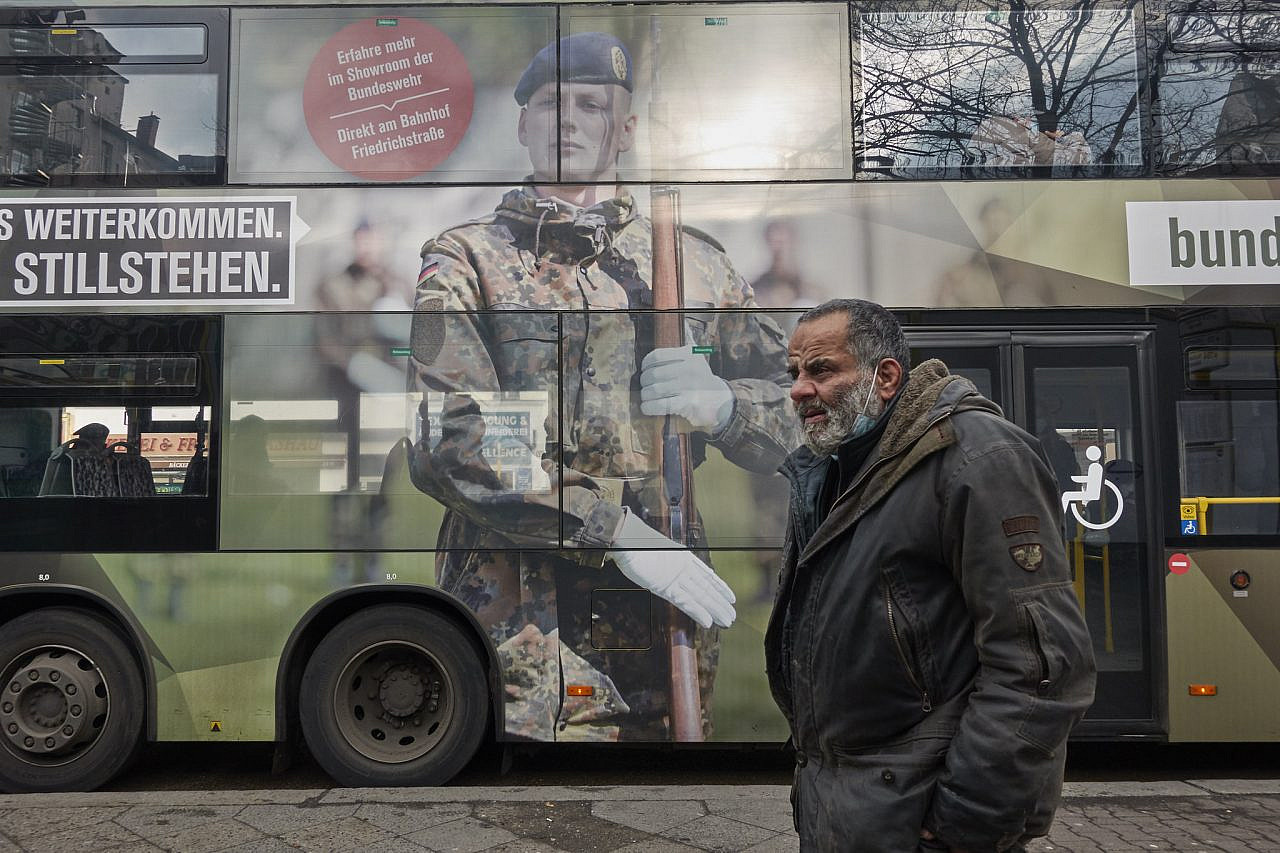 Yet there is no reliable correlation between the arrival of Palestinian, and more broadly Muslim, refugees and the relative number of perpetrators of antisemitic attacks. In fact, between the period of 2001 and 2015, right-wing white Germans were usually responsible for around 95 percent of such attacks. Yet the increased arrival of refugees from Muslim countries has, by contrast, led to a spike in hate crimes against Muslims: in 2020 alone, for example, there were around 900 attacks on German Muslims, along with more than 100 attacks on refugee aid workers in Germany, most of them right-wing motivated.

‘Palestinian identity is crucial to me’

The 2000 citizenship law and the post-9/11 environment therefore impacted every space that Palestinians occupied. Meanwhile, the strengthening of security policies deployed against Germany’s Muslim and Palestinian populations also targeted individuals who spoke out against Israel, and — in the case of organizations and other groups — threatened to deny their use of public spaces. Stop-and-frisk searches in front of mosques after prayer became increasingly common.

Yet even though the circumstances of Palestinian communities in Berlin have not dramatically improved, activism rebounded among second- and third-generation Palestinians in the city in 2014, in the wake of Israel’s assault on Gaza. In the last few years alone, many organizations have been created with the aim of advancing the Palestinian struggle — among them Palestine Speaks, Jewish Voice for Peace, the Bundestag 3, Palästina Antikolonial, and Jüdischer Bund.

Describing the massacre in Gaza as a “rupture,” Bulbeisi notes how young Palestinians took charge, “adopt[ing] a policy of visibility that differed from the generation before them.

“Whenever you have these [Israeli] operations, the oppression in Germany towards its own Palestinian population gets more severe — enabling the Palestinians here to identify with the Palestinians in Palestine,” Bulbeisi continues. “To a degree, the experience now becomes universal.”

And that surge in activism among young Palestinians in Germany has been accompanied by a growing embrace of, and pride in, their national identity.

“I used to think living in the diaspora meant I was less of a Palestinian than the Palestinians living in Palestine,” says Layan Abhari, a youth activist based in Offenbach am Main, near Frankfurt. “But I learned in exile here in Germany that the struggle for return and liberation shapes a huge part of the Palestinian identity. I truly learned the meaning of the saying ‘to exist is to resist.’”

“Even though I was born here and raised here, the Palestinian identity is crucial to me,” Sarah Abou Rajab, an activist with the group Palestine Speaks, tells +972. “In order for Germans to even begin to speak about Palestinians you have to immediately concede crucial aspects of the struggle and of your identity in order for them to even listen to you, or in order to be seen as a ‘good Palestinian’ or good ‘Muslim.’

“Facing severe discrimination for being Arab and Palestinian made me realize that instead of turning away from my identity in Germany, I would instead embrace my taboo and hated culture,” Rajab concludes. “I wanted to strengthen my Arab self — my Palestinian self.”