Gaza’s injuries have provoked every Palestinian and created in us the desire for all Palestinians to live in unity in our lands occupied since 1948.

I was unable to recognize him from the photos I saw on social media sites. Neither could I recognize him from the hospital photos that showed him dead. I went to his funeral after Friday prayers, where thousands had gathered. Suddenly I saw a poster and on it the martyr’s name, Nader Mohamed Idriss. I was surprised, since I had seen him only a few days before in the exact place where he was killed.

Nader had been fatherless since the age of 12. He was an activist whom I got to know one year after the 1987 First Intifada, and he continued to be committed to the struggle until his last days. Nader was poor and peaceful during his life; he was employed in the shoe industry, which became unprofitable after Chinese goods began flooding the Palestinian markets. 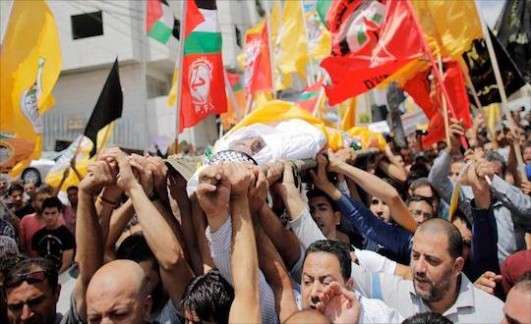 Nader helped to transport and package donated goods for the people of Gaza from Hebron. His last photos were taken as he was volunteering. Some of the people who accompanied him said he had brought a bag of flour that he intended to use to bake goods for Gazans, since he lacked the money for a donation.

Nader was assassinated in cold blood by an Israeli army sniper who shot him in the heart; some activists in the Human Rights Defenders’ group filmed Israeli snipers using silencers on their weapons. Nader is gone and he has left his wife and seven children to face the dangers of life alone. He left us, saying: “Yes I’ve gone, but Palestine has not.”

The concept of the afterlife appears in the creative work of Palestinian artist and activist Bushra Shanan. She has turned photos of death and destruction into living photos. Bushra, a founding member of Human Rights Defenders, felt psychologically affected by the extent of devastation and crimes committed in Gaza. She therefore decided to reflect this through graphic paintings like the one in which children killed in Israeli attacks are flying to heaven. In another she has painted Gaza surrounded by a huge snake hungry to swallow it. Amongst her other paintings Bushra depicts stones weeping for those destroyed.

In its latest offensive on Gaza, Israel wanted to turn buildings into ashes, to displace the civilians living in them and put pressure on the resistance through collective punishment. Regardless, the result is that Palestinians still call for freedom, breaking the siege and opening all the crossings, including the only one that links Gaza to the West Bank. Palestinians call for the freeing of those prisoners released in the Gilad Shalit deal who were then vengefully detained during Operation Brother’s Keeper, along with the fourth group of prisoners that was scheduled to be released under an American-led agreement between Israel and the Palestinian Authority.

As part of the ceasefire negotiations, Hamas in Gaza has called for the building of a Palestinian sea port. This is a simple human demand that must be met so that we don’t remain under Israeli control in the name of security. This is a security that is killing Palestinians daily and requires that we have no right to security or freedom, while Israelis must have everything. In this way, what is expected of the victim is to protect the occupier and the controller. 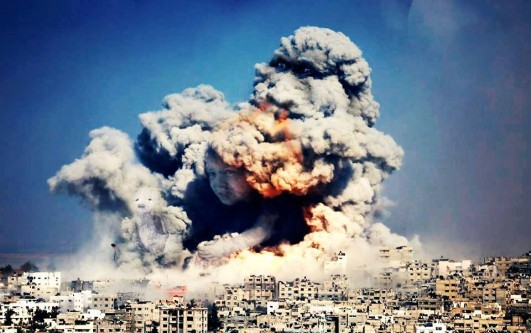 The creative Shanan said that she has established a group of friends in a campaign called “Make a child smile,” which aims to sell paintings for the benefit of Gaza’s children. She has called on all her Palestinian friends to deliver her message and help Gaza rise once again. Shanan believes that art and painting are a form of resistance that must be used to serve the Palestinian cause.

Palestinians continue to be united after the failure of Israel’s campaign of mass destruction intended to undermine the will of the people. Israel could easily be condemned for war crimes if there was justice in the world. To emphasize this sentiment, youths have established campaigns calling on people to use local Palestinian products instead of Israeli ones, in a call to boycott Israeli goods. Palestine has been turned into a big workshop and many merchants have been seen emptying Israeli products from their shops.

Gaza’s injuries have provoked every Palestinian and created in us the desire for all Palestinians to live in unity in our lands occupied since 1948, so that this unity can be coalesced in the blood of the martyrs and so that Bushra can paint about life and about the Phoenix bird who reappears from the ashes after many thought that he was dead.

Badia Dweik is a Palestinian activist based in Hebron.

Related:
‘Ending the siege is not a Hamas demand – it is a Palestinian one’
The West Bank may be on the verge of exploding
Gaza dispatch: Why the people support Hamas