In a rare, united political front, Palestinian protesters try to reach Hebron’s segregated Shuhada Street but are confronted by Israeli army and police. Five are arrested and a B’Tselem researcher is hit in the head with a rubber-coated bullet. [This post has been updated] About 1,000 Palestinians from all political parties, joined by Israeli and international activists, marched through the streets of Hebron Friday afternoon demanding to reopen the city’s formerly central commercial street. Shuhada Street has been closed to Palestinians movement for the better part of 20 years since the Cave of the Patriarchs/Ibrahimi Mosque Massacre.

The procession started at the central mosque in the Palestinian-controlled part of Hebron’s old city around noon and quickly arrived at the army checkpoint stopping Palestinians from entering Shuhada Street. Within seconds the scene ignited with stun grenades and tear gas canisters thrown by soldiers and police at the protestors and stones flying in the opposite direction. The vast majority of demonstrators retreated immediately but a few stayed and tried to cross over through the army lines. Many were beaten and five were arrested before this group also turned around. [Update: Youth Against Settlements in Hebron say three of the detainees were later released]. The demonstration went on for another hour with small pockets of protesters trying to regroup and march on to the checkpoint again, each time answered with more “crowd dispersal” weapons and police chasing them back into the city. Eventually the organized actions faded away, leaving groups of youths setting tires on fire and confronting soldiers for a few hours longer. Several demonstrators were lightly wounded during the protest. The worst injury was received by B’Tselem’s Hebron field researcher, Musa Abu-Hashash, who was shot with a rubber coated bullet that grazed his head. He was hospitalized for several hours. According to B’Tselem spokesperson Sarit Michaeli, Abu-Hashash was walking in an area with no confrontations and was wearing a clearly marked, blue B’Tselem vest. A Palestinian demonstrator is arrested by soldiers (Oren Ziv / Activestills)

As several organizers mentioned at the end of the protest, the demonstration was especially important in three main aspects: first, it showed a rare example of inner-Palestinian partnership. In previous years the “Open Shuhada” campaign was run by Youth Against Settlements, which is more affiliated with Fatah, and separately, by the Defense Committee, a coalition of left-wing parties (PFLP, DFLP and the People’s Party). This is the first time that the different factions united for one demonstration. The second point organizers stressed was the important partnership between Palestinians and Israelis, a partnership based on anti-colonialist action and not empty words. Thirdly, and this was of particular importance to the Defense Committee people, demonstrators carried signs and chanted calling on John Kerry to either speak out against all illegal Israeli settlements and demand an end to colonization as part of the peace process – or leave the area altogether as his current proposals would thereby contribute nothing toward peace. 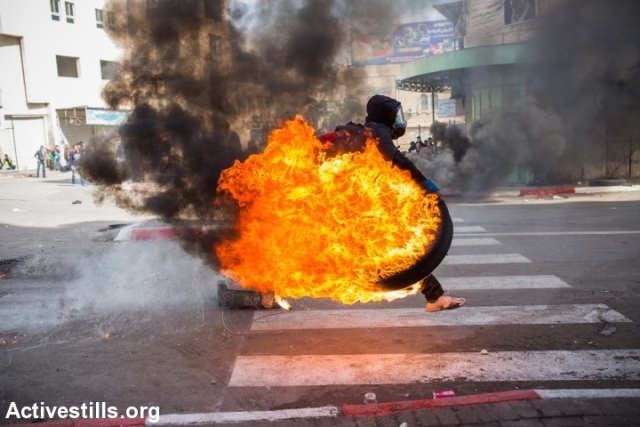