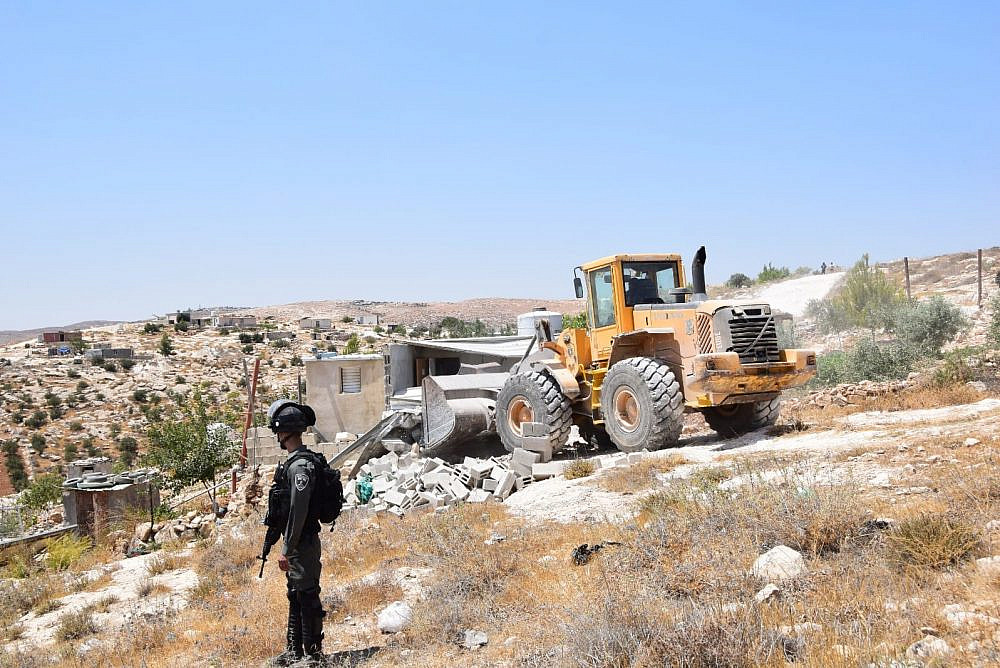 It was during the early hours of Aug. 11, 2021, when Amer al-Dababseh found himself lying on the ground clutching his fractured ankle. A few minutes before, he had heard shouting coming from his neighbors, and when he came outside he saw that Israeli Border Police had entered his village of Khalet al-Daba in the occupied West Bank with bulldozers.

Amer ran to where the police and bulldozers had stopped, only to find that they had come to demolish the home in which his brother, Muhammad, had lived together with his wife and their 13 children. “The police were standing between Muhammad’s children and the bulldozers that were demolishing their home,” Amer says. “As soon as I arrived they started to push us and beat us up, screaming at us to go back and get out of here. I asked one soldier, ‘Why are you demolishing these children’s home?’ He didn’t answer me; instead, he and other soldiers started to hit me with their weapons.

“They hit my hands, legs, stomach, and all over my body,” he continues. “They were hitting me in the chest with the butt of their guns, so I couldn’t breathe. Then I collapsed unconscious — that was the last moment I remember. I had seen my nieces and nephews crying, and all I wanted was to try to save their home.”

After regaining consciousness with a searing pain in his ankle, Amer was rushed to the hospital in the nearest Palestinian city of Yatta. He stayed there for a week, due to the need for a surgical procedure to insert a metal plate into his ankle. His doctor told him that it would be several months or even a full year until he could walk on his leg again.

Amer is 39 years old, and his job as a coffee seller is the only source of livelihood for him, his wife, and his two sons. He used to regularly walk for dozens of kilometers from his home in Khalet al-Daba to the nearby city of Yatta in order to sell cups of coffee to passers-by — always with a smile. He says he made this effort every day in order to be a proud father and provide a dignified life for his children, where they could enjoy their basic rights to shelter, food, health, and education. 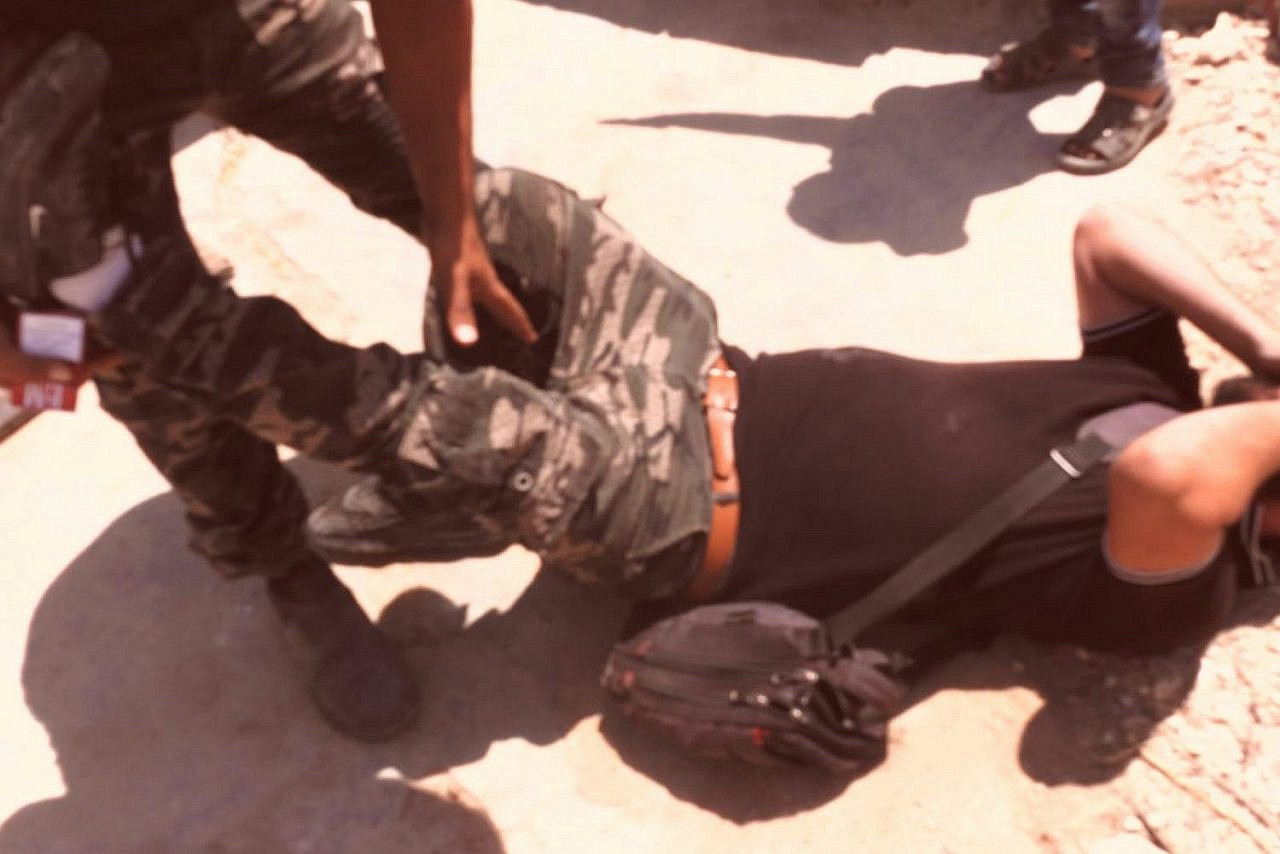 Amer al-Dababseh lies on the floor after being beaten by Israeli Border Police in his village of Khalet al-Daba, South Hebron Hills, August 11, 2021.

Sitting with Amer and observing his facial expressions, he looks devastated and exhausted. But he remains resolute: his ankle was fractured because he wanted his nephews and nieces to continue to have shelter. “Even if I lost my two legs for this I would do it again,” he says.

‘We are without water, without electricity, even without homes’

The village of Khalet al-Daba is one of 12 Palestinian hamlets in the Masafer Yatta region — located in the South Hebron Hills — facing the imminent threat of mass expulsion, pending a Supreme Court hearing scheduled for next month. In the early 1980s, the Israeli military acted on the proposal of then-Defense Minister Ariel Sharon to declare the whole area a military training zone as a means to displacing the Palestinian communities residing here. Ever since, all of us who live in what was named “Firing Zone 918” have faced a constant struggle to remain on our land.

In 1999, villagers were evicted on the basis of a false claim that they were not permanent residents, before subsequently being permitted to return. But even short of direct expulsion, Israel has done everything it can to make life unbearable in Masafer Yatta — as in the rest of Area C — chiefly by denying us building permits whenever we seek to build on our own land. As such, we have become accustomed to routine demolitions of “illegal” construction.

Amer has seen his own house demolished four times. The first such occasion was in 2017, when Israeli authorities bulldozed the 80-square-meter home he had built using bricks and a tin roof. “It left me, my wife, and my kids homeless,” says Amer. He was forced to stay in a room in his father’s house for two years until he was able to finish rebuilding their demolished home. “It was demolished again, however, so again we returned to live with my family in my father’s house.”

On the same day that Israeli forces broke Amer’s ankle and demolished his brother’s home, they also destroyed a water cistern belonging to another of Amer’s brothers, Jaber. The communities of Masafer Yatta have repeatedly tried to connect their villages to water, but the Civil Administration — the arm of the Israeli military that manages the day-to-day lives of Palestinians — repeatedly destroys the pipes. The Civil Administration also prohibits Palestinians from building or paving roads, which makes it difficult for water trucks to reach the area. So, in desperate need of water, they dig cisterns to collect rainwater. 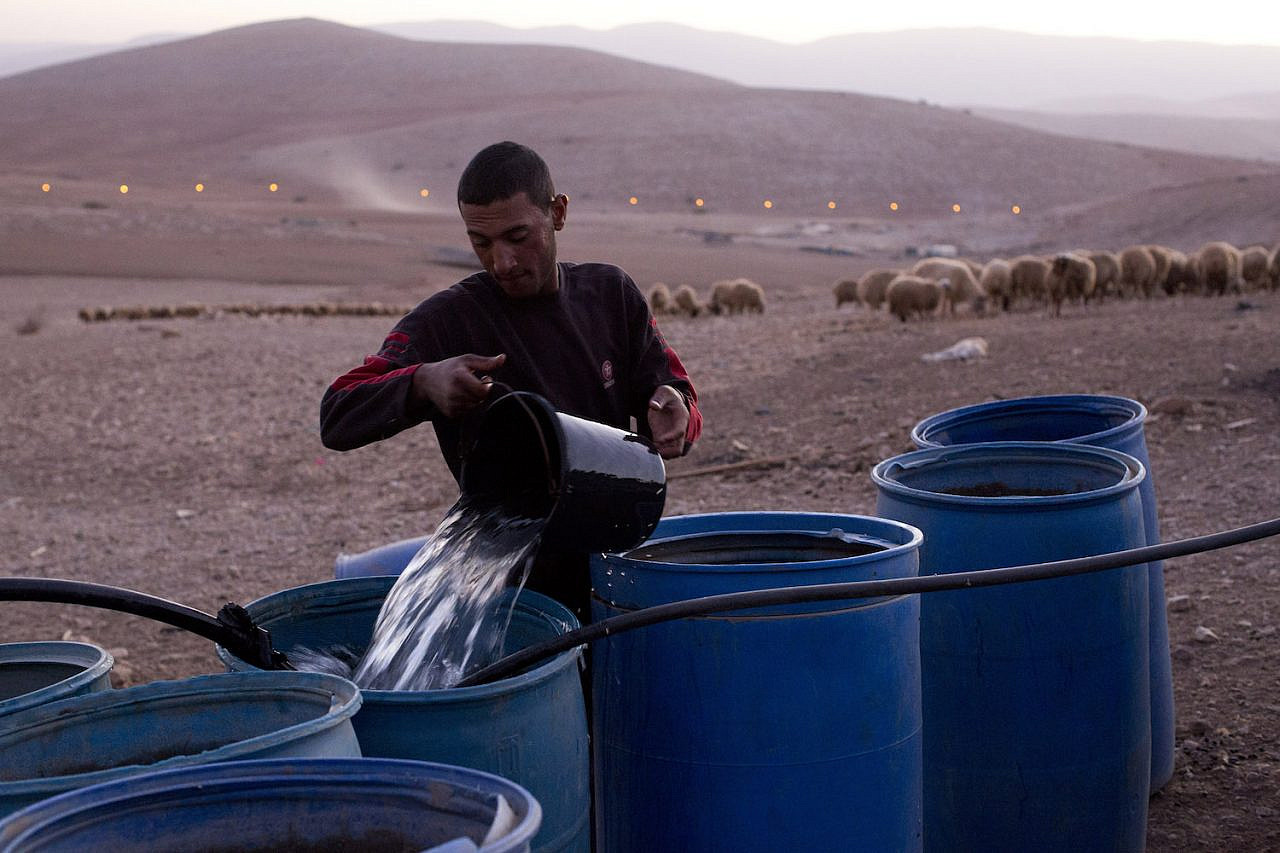 However, even water cisterns are subject to demolition, as was the case with Jaber’s on that sweltering August day. The well that he had dug was capable of storing around 80 cubic meters of rainwater — a crucial resource for the family during the summer months when temperatures can reach 40 degrees Celsius.

“We are without water, without electricity, even without homes,” says Amer. “On the other hand, the Israeli settlers who live on our land are provided with everything. When a settler builds a new outpost on Palestinian land, he gets water, electricity, and a road. When we build on our own land, we are prevented from having any of this. Even the alternative systems that we create to stay alive are targeted, like the rainwater cisterns which are our only water source.

“Khalet al-Daba is my only home — I’ve lived here since I was born,” he continues. “We all grew up here, including my oldest brother who is 50 years old. My father inherited our land in this village from his father and ancestors. But the occupation is trying to cleanse us from our land, without facing any legal accountability or international pressure.”

Amer hopes that the world will hear his message: “I am against violence, I love peace, and I want to live in safety as I wish for everyone else in this world. Until when do I have to worry about the future of my family? Until when do I have to live wondering whether tomorrow I will still have a home? I hope that the soldiers that broke my leg will understand one day that I am a human being like them. I was just defending my family and they responded by leaving me with a disability. I used to walk the whole day from sunrise until sunset to support my family. Now I don’t know when I will be able to walk again.”