About 500 people rebuilt 15 tents on privately owned lands in the new village-outpost of “Bab Al-Shams,” located at the heart of the much controversial E-1 area, where Israel intends to build thousands of new settler houses, isolating Jerusalem from the rest of the West Bank and cutting it in two. Bab Al-Shams was originally set up a few months ago, and dismantled by Israeli police several days later. Activists in the new Bab Al-Shams held signs saying “you promised hope and change – you gave us colonies and apartheid.” 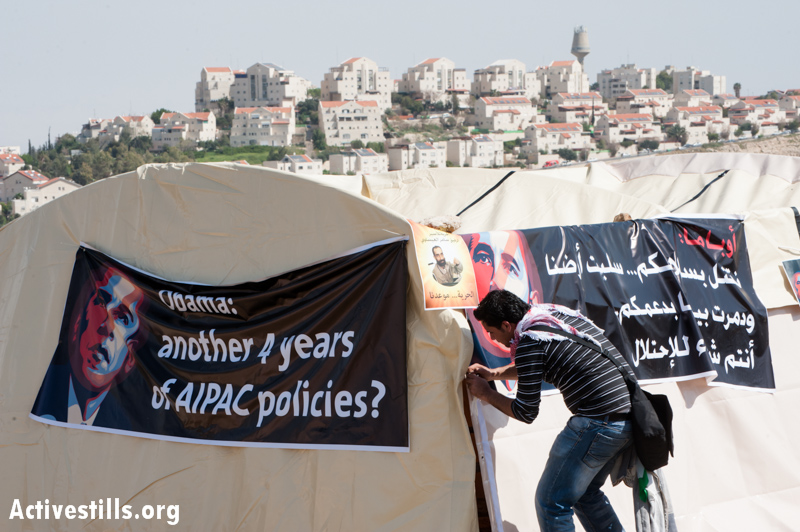 With the Israeli settlement Maale Adumim visible on the horizon, Palestinian activists erect a new protest camp in the E1 area, focusing their protest on the visit of U.S. President Barack Obama, West Bank, March 20, 2013. All Israeli settlements in the occupied Palestinian territories are illegal under international law. The action took place at the same hour Obama landed in Ben Gurion airport near Tel Aviv. Photo by: Ryan Rodrick Beiler/Activestills.org

Meanwhile in Hebron, Israeli army forces arrested about 30 schoolchildren, at least five of whom were between the ages of 8 and 10 and thus under the age of criminal responsibility, according to B’Tselem. The children were accused of having participated in acts of stone throwing.

Later in the afternoon a group of some 25 Palestinians, internationals and Israelis marched on Shuhada Street in Hebron, where freedom of movement has been restricted for Palestinians, and the street has been open only to Israelis for the past 12 years. The activists, who were following up on a Saturday workshop on civil rights in the U.S., wore “I have a dream” T-shirts and masks with the faces of Obama and Martin Luther King Jr., and carried signs connecting the fight for civil rights in the American South to that of Palestinians against apartheid. Activists sang “Woke up this morning with my mind set on freedom,” when a group of settlers started to attack them. Soldiers who swiftly arrived on the scene reportedly zoomed in on the prominent local activists, arresting four Palestinians, three internationals and two Israelis, who were later released.

The approaches Palestinian activists took to Obama’s visit were varied. Demonstrations in Ramallah (and Bab al-Shams) called on Obama not to come at all, and many blame the U.S. government for its cooperation with the Israeli occupation. The demonstrators in Hebron employed a more “welcoming” approach, asking that Obama remember the history of racism in the U.S. and implement the lessons learned there, for the benefit of Palestinians here today.