Out of the 982 members of the Israeli Academy of Film and Television, there is not a single Palestinian. 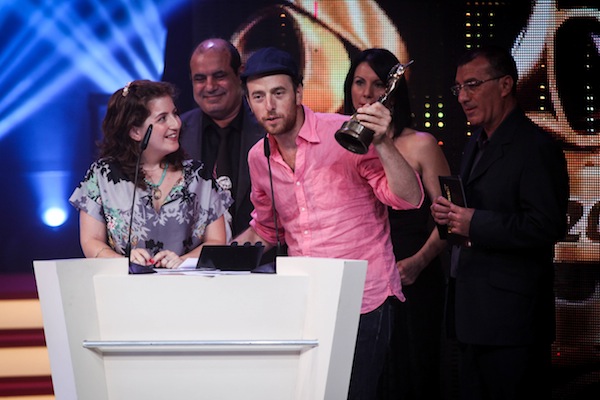 Tamar Tal and Barak Heymann receiving Ophir Award for Best Documentary Film “Life in Stills” in Hafia. September 21, 2012. “Fill the Void”, which was named Best Picture of 2012 and will represent Israel in the Best Foreign Language Film category at the American Academy Awards on February 24, 2013. (Avishag Shaar-Yashuv/Flash90)

I leave my gear with the rest of the production team and go downstairs to take a walk around the village. At the village center I find a bit of shade overlooking the local pub. While sitting and rolling a cigarette, I notice a woman walking by with a garbage bag. “A local,” I think to myself, and decide to rid myself of the boredom that has come to be mixed with depression.

“What?” she answers in shock. I noticed her blue eyes still in shock when she started to shake her head for quite some time after I asked my question.

She keeps walking. I sit and look at her. She throws a garbage bag right next to the entrance of the pub, before walking inside to say hello to someone. I wondered to myself what bothered her more: the fact that she lied to me, or the fact that she just walked into a mosque that had been stolen from its owners in order to say hello to a friend over a beer, before returning to the stolen Palestinian house she lives in, which has an “art gallery” in its yard. But at least they tell Palestinians to stop building mosques, right?

I always hated the “artist colony” of Ein Hod, established in place of Ein Hud, a Palestinian village whose inhabitants were expelled from their homes. A few weeks ago the director of a movie I am producing decided to drive there and film some shots for a movie about the Nakba. Once we finished I pressed the crew to go back to the car. I’ll only come back here when Ein Hod goes back to being Palestinian, I told them. 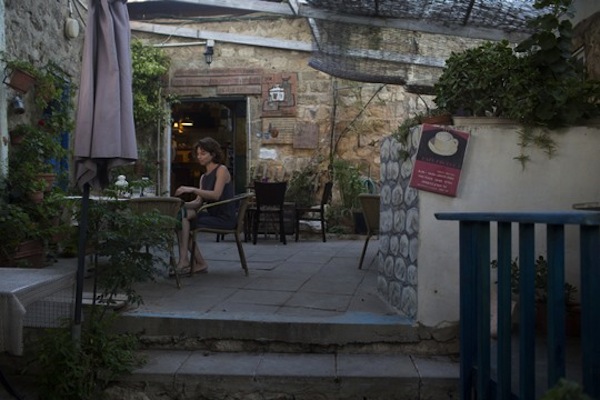 A coffee shop in Ein Hod, an ‘artists colony’ in northern Israel, July 16, 2016. Hundreds of Palestinians were expelled from the village during the 1948 War. (Lior Mizrahi/Flash90)

The village (which is more of a settlement) is located half an hour from Haifa. Its residents were expelled in 1948, and some of them re-established their village just up the mountain — a village the state refused to recognize until 2005. The whole thing represents the ugliness of the Zionist Left’s ideology. Under the guise of “contemporary art,” Ein Hod’s residents live on the ruins of the lives of Palestinian refugees, in beautiful homes that belonged to others 70 years ago. “But it’s okay,” they’ll say to themselves, “I opened a gallery here. I’m leftist!”

Beyond the willingness to make bad art to silence their conscience, many Israeli artists often hold racist beliefs and exclude their Palestinian colleagues. The recent controversy surrounding the Israeli Academy of Film and Television is a prime example of that.

Several weeks ago the academy announced its nominees for the Ophir Awards, which recognize excellence of professionals in the film industry (a film that wins Best Picture usually becomes Israel’s submission for the Academy Award for Best Foreign Language Film). Beyond the fact that Udi Aloni’s film, Junction 48, which stars Palestinian hip hop star Tamer Nafar and presents the Palestinian narrative in an uncompromising way, was not even nominated for Best Picture (despite its global success) — was the issue of representation of Palestinian citizens in the academy. 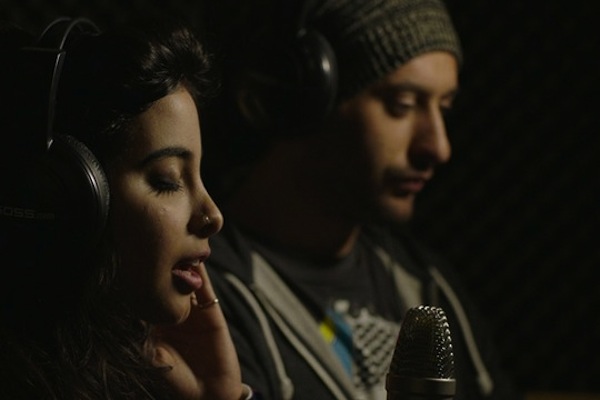 Spoiler alert: there are none.

The judges of the Israeli Academy prefer to pick a film from the “shooting and crying” genre to send to the Oscars — the kind of film that shows Israeli soldiers wiping clean their conscience — or at the very least a film that focuses on Arab crime without ever referring to the Palestinian disaster. On the other hand, most Palestinian artists will talk about occupation and the struggle against oppression. The Israeli artist will clean his conscience, while the Palestinian will remain in his or her struggle.

‘They don’t deserve it’

The story is not that Junction 48 was not nominated. Let’s give the academy the benefit of the doubt and assume that their considerations were professional. The question, then, is why there is not a single Palestinian member in the academy. Why, out of 982 judges, is there not one Palestinian? How could it be that in an art form known for its critical and left-wing outlook, Israel’s academy does not accept Arabs?

So it turns out that the academy actually does accept Arabs. In fact the academy is open to every Arab working in the film industry, and acceptance is conditioned upon request and meeting the necessary criteria. So are Arabs simply missing another opportunity? Not at all.

Everything comes back to the occupation. After all, the Israeli academy chose to be on the side of occupation and apartheid rather than on the side of those fighting against occupation and apartheid. The academy never once took a stand against the government or in support of ending the occupation. They prefer to think that this is not their role. How can a Palestinian artist driven by an ideology of resistance — and most Palestinians filmmakers are driven by this ideology — agree to be part of such a Zionist institution?

Few in Israel understand the role of art. Good art is not a gallery in a stolen Palestinian home. This is not good art, but rather barbarity disguised as art. Real art raises questions, and isn’t busy running away from the answers.

Just as the residents of Ein Hod continue to hide, the Israeli Academy of Film and Television continues to run away. It is a good thing, then, that it cannot pride itself on even a single Palestinian member. It certainly doesn’t deserve it.