Hundreds of activists, organized by a coalition of Palestinian, Israeli and American Jewish groups, built an encampment in Surara, from where Palestinians had been expelled in the 1990s. 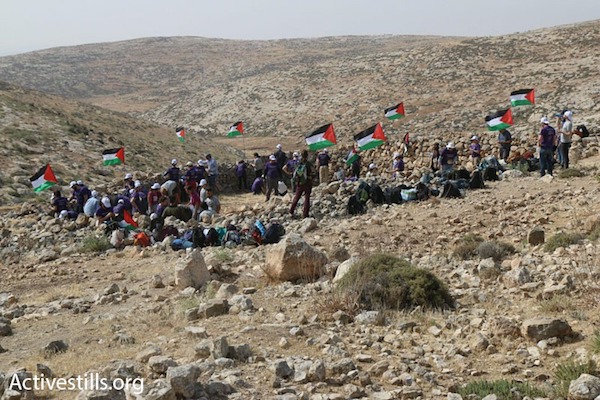 Around 300 Palestinians, Israelis and diaspora Jewish activists staged a direct action in the village of Sarura in the south Hebron hills of the West Bank on Friday, building a protest camp on land from which Palestinians were evicted in the 1990s. The event was also intended to mark 50 years of occupation.

The event was organized by a coalition of groups, including the Center for Jewish Nonviolence, local Palestinian committees, Youth Against Settlements, the All That’s Left Collective, the Holy Land Trust and Combatants for Peace. Members of IfNotNow also participated in the action. Activists arrived in the morning and continued working through to the afternoon, when several people — including Youth Against Settlements’ Issa Amro — spoke about the purpose and impact of the event.

Issa Amro: “American Jews will help us resist the occupation…we, human and civil rights activists are the future” #WeAreSumudpic.twitter.com/hQubpZd3Kt

In a press release, the organizers said that the “Sumud Freedom Camp” would remain in place for a week, during which workshops on nonviolent resistance will be held. The organizers also called on activists “around the world to hold meetings, demonstrations, solidarity actions, discussion groups and prayer groups aimed at ending Israel’s military occupation and oppression of the Palestinian people.” 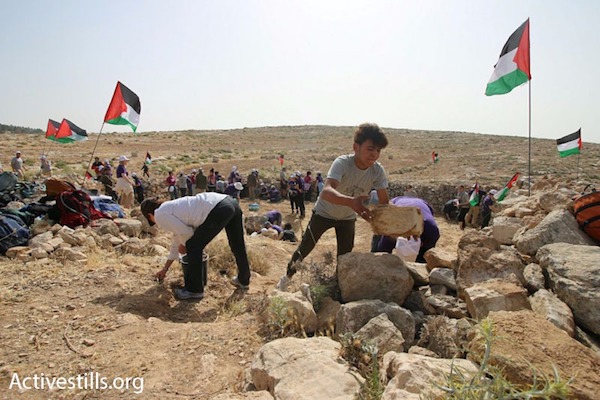 Sulaiman Khatib of Combatants for Peace called the action “another step in our nonviolent joint struggle for freedom and respect for everyone in this land.”

Activists taking part in the event updated from the ground, tweeting with the hashtag #WeAreSumud (“sumud” means “steadfastness” in Arabic, and is a central concept in Palestinian resistance to the occupation). Participants also noted that the outpost had been inspired by the Standing Rock protest camps in the United States, established to try and prevent the building of an oil pipeline through Native American land.

As the day progressed, activists shared photos of Palestinians returning to the homes they’d had to leave behind 20 years earlier.

Residents of Sarura return to the home cave they were forced out of in 1997. #WeAreSumud pic.twitter.com/swYSETvG9K

Residents of Sarura who were expelled by Israel also shared their stories.

Palestinian resident of Sarura who was forced to leave his home telling his story. We are restoring the village together. #WeAreSumud pic.twitter.com/l9CuketsRg

Although activists noticed an Israeli army drone hovering overhead as they worked, there were no reports of interference from Israeli security forces or settlers.