For 50 years, Israelis and Palestinians have lived separately-together under one rule. Only one group has been able to reap the fruits of democracy. 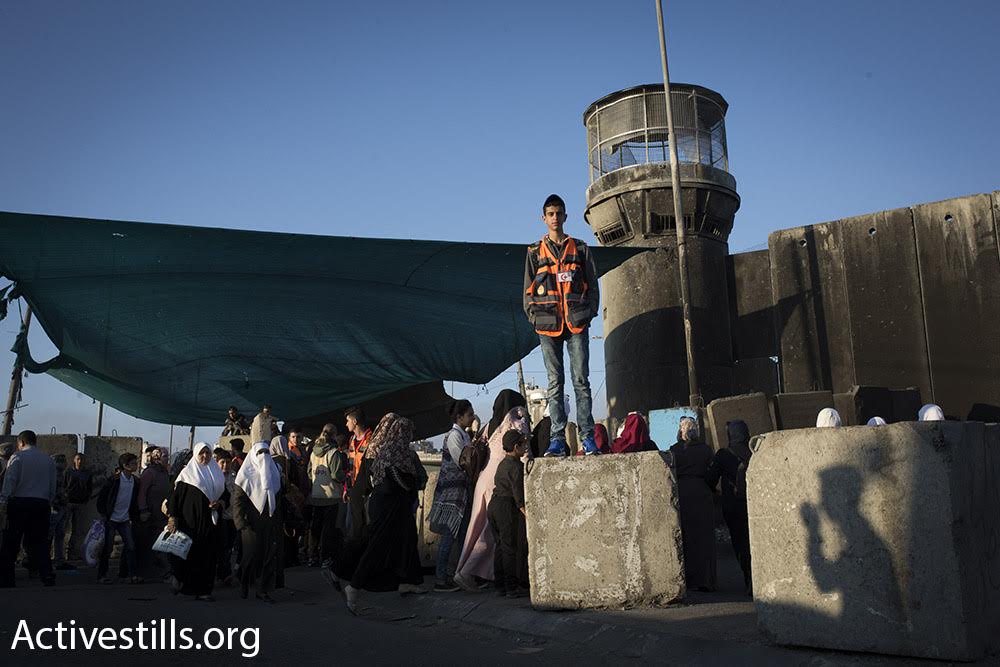 Palestinian women and children, along with men over the age of 40, walk through Qalandiya checkpoint toward Jerusalem on the first Friday of Ramadan, June 2, 2017. (Oren Ziv/Activestills.org)

When Israelis vote, Palestinians do not. But they do get to participate: they can watch. Like the residents of the Palestinian village of Beit Ur al-Fauqa in the occupied West Bank, who get to watch as the ballots cast by their Israeli settler neighbors from Beit Horon are shipped to election headquarters – the Knesset that Palestinians do not get to vote for (but whose decisions control their lives) on a highway they cannot use (but built on land confiscated from them).

Palestinians also get to participate in the legal proceedings of Israeli courts: They get to be convicted. Not much of a surprise, given the clear division of roles in the theater of injustice of military courts. Israelis are always cast as judges, prosecutors, and issuers of the military orders under which Palestinians get to play their humble roles as objects of detention, interrogation, prosecution, and conviction.

Even when Israelis regulate relative minutiae such as fishing, Palestinians get to participate. Israel recently revised fishing regulations in the Mediterranean, prohibiting fishing near the coastline in order to prevent harm to vulnerable marine habitats. However, along the Gaza coast, Israel imposes restrictions that are the exact opposite: Gaza’s fishermen are not allowed to travel more than a few miles from the coastline. We regulate, they participate.

The population registry also entails Palestinian participation. While the registries for Israelis and Palestinians are separate, they are both administered by Israel, which registers not only its own citizens, but also Palestinians, be they in Gaza, the West Bank or East Jerusalem. For some politicians, the statistics derived from these registries may make for dreadful demographic scenarios, but nevertheless Palestinians do participate: they are born and get married — from one generation to the next.

Palestinians participate in Israel’s planning and building bureaucracy as well. As far back as 1971, Israel cancelled the local planning committees in the West Bank, transferring all such powers to its own hands. Consequently, while Palestinians are not represented in the planning process vis-a-vis their own land, they do get to participate in the outcome. Their villages are like black holes, places with virtually no new planning, thus rendering their homes and construction illegal. A legally approved master plan is needed for a connection to running water. But the masters have other plans. So Palestinians get to participate in the planning process not by receiving running water, but by having their homes bulldozed.

Indeed, representative democracy across the globe has been in recent decline. But lack of representation does not preclude participation. For 50 years, Israelis and Palestinians have lived separately-together under one rule: our rule. And yet, Palestinians do participate. They have never ceased – and they never will. One day, participation as unwilling subjects will morph into a different form of existence in Palestine. Under a small patch of sky, separately-together or otherwise, we are all here – and we all remain here – on this small patch of land, at the edge of the Mediterranean.

Hagai El-Ad is the executive director of B’Tselem. This post was first published in Tikkun Magazine.